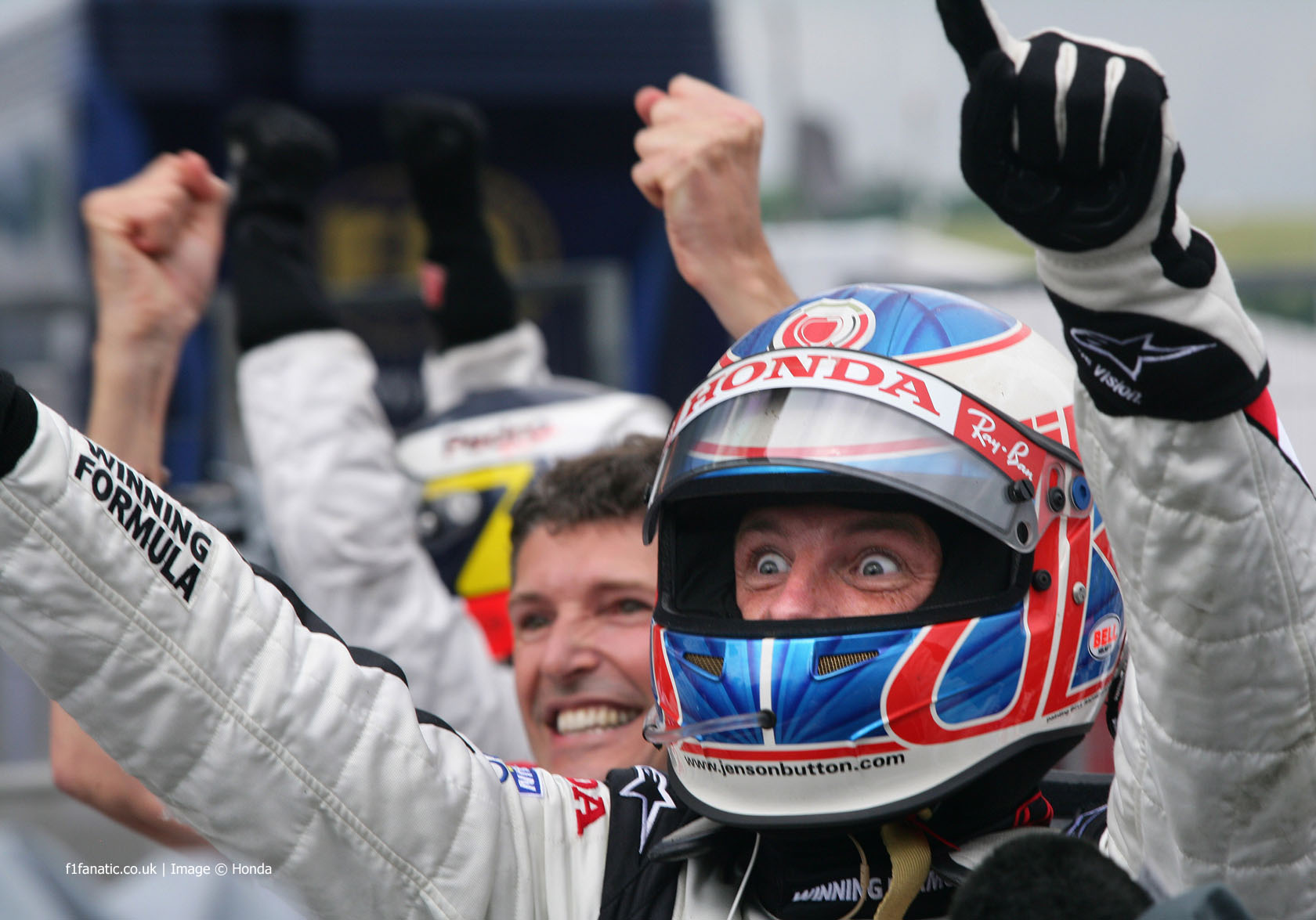 The eyes have it. Jenson Button emerged from a chaotic Hungarian Grand Prix to score his first ever win in Formula One in 115 attempts.

It was a dramatic, ever-changing race which saw neither Fernando Alonso nor Michael Schumacher advance their championship challenges.

Neither of the championship contenders qualified in the top ten for the Hungarian Grand Prix. And, come the end of the race, neither of them had scored points either.

It was one of ‘those’ races like we saw at Melbourne this year. A top-turvy grid and mixed weather conditions provoked a race with more changes of position than perhaps every Grand Prix that preceded it this year added together.

Jenson Button triumphed from an unlikely 14th place on the grid after an engine penalty. On a day when the elite few drivers we regularly hail as the best in the world all faltered, Button prevailed.

After a chaotic first lap the race never really settled down. Kimi Raikkonen converted his second consecutive pole position into the lead of the race, while second placed Felipe Massa plummeted from second to seventh.

All eyes were on the championship leaders Michael Schumacher and Fernando Alonso, who by the end of the first lap had leapt from 11th and 15th to fourth and sixth.

Schumacher had gained most of his places going into the first corner, and Massa had predictably scampered out of the way. Alonso was mired in the midfield for the first two corners but sliced past other rivals in the corners around the back of the circuit which may never have seen Formula One cars passing before.

On lap two Alonso passed team mate Giancarlo Fisichella out in the back corners and Button demoted David Coulthard one position. Robert Kubica, making his Grand Prix debut in the most testing of conditions, spun but got going again.

Already the deficiencies of the Bridgestone tyres were becoming clear. In no time at all Alonso was taking four seconds a lap out of Schumacher, and drove around the outside of him at turn five.

Ahead, Rubens Barrichello lost second place to Pedro de la Rosa, who had spun on the formation lap going to the grid. Barrichello had gambled on full wet tyres which proved too deep a tread for the conditions and he changed to intermediate tyres on lap five.

So by lap six it was a McLaren one-two with Raikkonen leading de la Rosa and Alonso catching the pair of them. Schumacher was falling into the clutches of fifth-placed Fisichella and Button, having passed Massa, was reeling in both of them.

In no time at all Button was past Fisichella and Schumacher. But when Fisichella caught the Ferrari he seemed unable to pass a car lapping four seconds slower than Alonso in the sister Renault was capable of.

Around lap eight the rain had picked up again and the leaders lap times slowed from the 1m33s to the 34s – but it wasn’t enough to help Schumacher. Nor Massa, who pitted on lap 12 for more wet tyres. In qualifying he had run with five laps less fuel (in wet running) than Raikkonen, but still failed to take the pole.

Michelin had a massive advantage at this stage in the race. Schumacher had fallen to 31s behind leader Raikkonen in 13 laps. Birthday boy Vitantonio Liuzzi (Toro Rosso, Michelin) was able to pass Jarno Trulli (Toyota, Bridgestone) for 14th.

Alonso wasn’t able to find a way around his compatriot in the McLaren, but de la Rosa pitted on lap 16 anyway. He was followed by Raikkonen on the next lap, which gave Alonso the lead.

Button and Schumacher also pitted but the latter was not scheduled. Fisichella had finally muscled past at the turn one hairpin but Schumacher had slithered into the right rear wheel of the Renault, tearing his own front wing off. The stop dropped him to ninth.

But the slippery conditions continued to catch drivers out: Raikkonen spun but continued, Fisichella spun off at speed on turn eight, hitting the barrier, and Kubica removed his nose wing at turn four.

Only Fisichella’s spin proved terminal – he retired on lap 20. Nico Rosberg joined him in retirement after an apparent electrical failure on his Williams-Cosworth. Team mate Mark Webber had pulled up on lap two. Sakon Yamamoto added no racing laps to the one he completed in Germany.

In clear air Alonso was flying, lowering the fastest lap into the low 33s. On lap 23 he caught Schumacher to lap him – just as he had three years ago en route to his debut win. Although Schumacher briefly refused to cede, he soon succumbed to the inevitable.

But this would be the high water mark of Schumacher’s deficit to the leader. Alonso had a 39 second advantage over Raikkonen, who had been caught by de la Rosa, suggesting Raikkonen had a problem.

Button was nine seconds behind that battle and a comfortable 18.6 seconds clear of his team mate. Coulthard, sixth, was just one second ahead of Heidfeld. Schumacher was first of the lapped cars, eighth. But all those gaps were about to be erased.

Raikkonen inexplicably hit a lapped Liuzzi from behind on lap 27. Both were out instantly, and the circuit was showered with debris. The safety car was scrambled, and the field bunched back up.

Every driver on the lead lap took the opportunity to stop – apart from Button. Schumacher kept going too, thanks to his heavy fuel load and earlier top-up he could get his lap back. His 1m 40s disadvantage shrunk to 25s.

The safety car peeled in on lap 30 and straight away Massa nerfed Ralf into a spin at turn one. The other Ferrari driver was in trouble at the next bend – Schumacher tripped over Coulthard and spun.

The three lapped cars behind Alonso gave him the opportunity to grab at least some of his lead back. On lap 32 his 1m 34.6s lap was 5.3s quicker than anyone else’s.

But on the next lap Alonso suffered a brief scare, the car slowing as he approached the penultimate corner. He got going again but had lost three second to Button, who had finally dispensed with Massa, the Ferrari driver having proved reluctant to be lapped.

Button and Alonso now began trading fastest sectors and laps, with Button slowly getting the upper hand thanks to his lighter fuel load. But on lap 38 both were beaten by Schumacher whose Bridgestones had finally gained some heat on a drying track.

He passed Coulthard for sixth on lap 39 – the Red Bull driver making little defence. His car had been wounded by contact with Kubica on the first lap, and the collisions with Schumacher a few laps earlier.

On the next lap Schumacher set a scorching pace – a 1m 29.0. He was officially back in the hunt, and on lap 43 made it past Heidfeld for fifth.

It was at this point that Ferrari made a crucial decision on tyre strategy. Massa pitted on this lap for a splash of fuel and fresh intermediate tyres. But when Schumacher pitted three laps later he didn’t change his tyres and fuelled to the end. This decision may have cost Schumacher invaluable championship points.

Kubica and Button also pitted and kept their warm, worn intermediates on. Button only took a slug of fuel and headed off after Alonso. Now Button was the fastest man on track – 28.0 on lap 49, 27.8 on lap 50, around 1.5s per lap quicker than Alonso.

When Alonso pitted on lap 51 he fuelled to the end but he wouldn’t make it that far. Cruelly, a driveshaft failure robbed him of a shot at victory, and denied the promise of a fight to the flag against Button.

But there was plenty more to watch for Schumacher’s strategy was proving his undoing. As the track dried quickly de la Rosa, third, was catching him at two seconds per lap.

A desperate Schumacher, low on grip, needing every championship point he could save, with only a handful of laps to go, was a recipe for controversy. Sure enough when de la Rosa got alongside into the turn six chicane Schumacher cut through the run-off area to stay ahead, chopping in front of de la Rosa as they swung into the next corner.

De la Rosa didn’t wait for the stewards to tell Schumacher to pull over for him – he tried the same move next time around and this time made it stick. And now Schumacher had another headache in the form of fourth-placed Heidfeld.

Heidfeld barrelled up the inside at the same bend and again Schumacher refused to yield. The two touched, leaving Schumacher with deranged steering. This was finally too much and he limped into the pits. He finished ninth, one place outside of the points.

The last point was taken by Massa, which strongly suggests that Schumacher could have guaranteed himself more points on Massa’s strategy. Kubica scored two points on his debut, Ralf was sixth and Coulthard scooped more points for Red Bull with a fine fifth.

Barrichello, fourth, could surely have won but for his strategic error of starting on full wet tyres. Heidfeld gave BMW their first podium and de la Rosa’s second was a career best.

But at the front Button was home and dry. Alonso’s car failure may have helped him, but Button’s had more than his share of that sort of luck in the past.

He never spun nor banged wheels with an opponent. He beat his team mate, a race winner and reputed wet weather specialist – who started 11 places ahead of him. On a day when none of the top six drivers in the championship scored points he was rock solid and unflappable.

It may have taken 115 races, but Button’s overdue first win was worth the wait.

Update: Following the race Rubert Kubica was disqualified for having an underweight car. Massa therefore finished seventh and Schumacher eighth, scoring one point and reducing Alonso’s championship lead to ten.