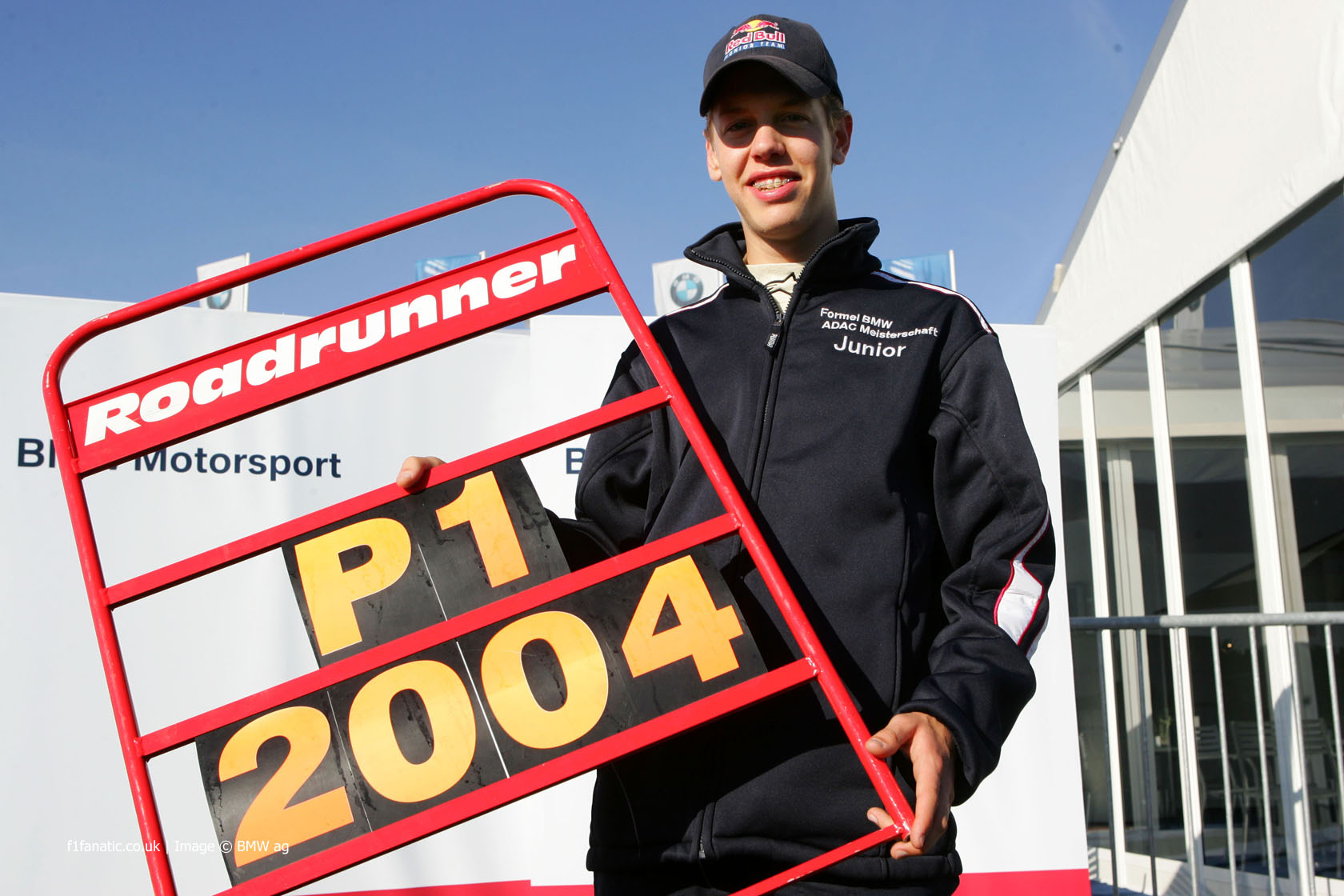 Sebastian Vettel has demolished many Formula One records, and last year became the first driver to win his first four world championships consecutively.

He also added an overdue win to his CV at his home grand prix. Appropriately it came at the Nurburgring, just an hour’s drive away from where he took his first steps as a racing driver.

Vettel was used to hanging around motorsport royalty from a young age: his local karting circuit in the late 1990’s was at Kerpen, where Michael Schumacher honed his skills.

Although Vettel first set foot on a kart track aged just three-and-a-half, he didn’t begin competing officially until he was eight. Gerhard Noack, a prevalent figure in the German karting scene at the time, remembered him as a naturally quick driver with a voracious appetite for information on how to go quicker.

“He was also a very friendly kid who always said thank you,” he said. “He was one of those people on the team who got there first and was the last to leave the circuit.”

It was the first inkling of the approach to his racing that marked Vettel out from many of his competitors – just as in 2011, when F1 switched to Pirelli tyres, he was the only driver who made a point of visiting their factory to learn as much as he could about the new rubber.

Back in 1998, it was this quality that convinced Red Bull’s motorsport advisor Helmut Marko to sing up the young karter to the energy drinks giant’s young driver development program. Here he is karting at Kerpen in 2000 aged 11 – appropriately driving kart number one at one point – winning against some older and taller competitors: The 2001 season saw Vettel storm to the European Junior title, winning all four races and also collecting the Junior Monaco Kart Cup and Friday Final event at Paris-Bercy in front of a large crowd.

He moved up a class the following year, taking sixth in the Senior ICA championship. This was his final year in karting, as victory in a one-off selection race for ICA drivers earned him an early promotion to single-seaters and Formula BMW in 2003.

Vettel avoided many of the pitfalls that await young drivers making the tricky transition from karts to full-blooded racing machines. Although he ended his first season win-less, consistent points-scoring and a string of podiums earned him rookie of the year honours and established him as the favourite for the championship in 2004.

He wasn’t the only driver with Red Bull backing that year: Adrian Zaugg and Christopher Wassermann also enjoyed their support. But it was Vettel who stormed to the title with a campaign of unparalleled dominance.

The 17-year-old scored 387 points from a possible total of 400 with 18 victories from 20 starts. His Mucke Motorsport team ended the year undefeated as his team mate Atila Abreu collected the remaining two wins early in the year.

Vettel clinched the title at the 17th race of 20 at Brno in the Czech Republic. Note the 14 smiley face stickers on the left-hand-side of his car’s nose denoting each of his victories up to that point:

Such a staggering achievement could not fail to attract attention further up the motor racing ladder. Frank Williams was kept abreast of Vettel’s achievements via BMW, who were keen to pave a route for Vettel to join them in F1. But Red Bull had plans of their own: in November 2004 they purchased the Jaguar F1 team.

Vettel moved up to the Formula Three Euroseries in 2005 where he continued to impress, ending the season as top rookie. The title was won by sophomore F3 driver and fellow future world champion Lewis Hamilton.

After a slow start to the season Vettel came on strong in the second half of the year. Here he is doing battle with Hamilton, already champion by this point, at a very wet Lausitzring: With Vettel staying in F3 for a second season, observers anticipated a repeat of his dominant 2004 Formula BMW campaign. As it turned out, he ended the season second overall to team mate Paul di Resta.

The title was decided at the penultimate round in Hockenheim. Di Resta qualified on pole position in a field rich with future F1 talent – Kamui Kobayashi and Giedo van der Garde on row two, Sebastien Buemi behind them and Vettel seventh alongside Romain Grosjean.

When Di Resta jumped the start, Vettel had the chance take the title fight down to the final race if he won. But he was only able to finish third, and the title went to his team mate:

By this time Vettel had already spread his wings far beyond F3. Halfway through the year Red Bull placed him in Formula Renault 3.5 at Carlin. He finished third on the road on his debut at Misano, then inherited the win when Pastor Maldonado was disqualified for a technical infringement and Ben Hanley was given a time penalty for an illegal defensive move.

“It was bloody important important to pass [Andy] Soucek on the first lap!” said Vettel after learning he had been promoted to victory. Proving he could win without such fortune, Vettel doubled up the following day with victory from pole position, in the first race he ever started which included a pit stop.

“It’s just overwhelming,” he said afterwards. “The whole weekend we were working so hard and obviously on Thursday was the first time for me in the car.”

But he came down from that high at the next round at Spa-Francorchamps. Vettel crashed at Raidillon in wet conditions, almost severing a finger in the impact:

That ruled him out of the second race but, defying doctor’s orders, Vettel was back at the wheel the following weekend in the Masters of F3 race at Zandvoort.

Now BMW made their move. Having lost patience with Jacques Villeneuve and promoted Robert Kubica to their race team, a new test driver was required. Vettel got the call and again impressed on his maiden appearance, heading the Friday practice times at Istanbul. He remained BMW’s test driver for the rest of the season.

The 2007 season began with Vettel knocking on the door of F1, but for now he was still a Formula Renault 3.5 driver. His first weekend of the year at Monza did not go according to plan when he was hit by Carlin team mate Mikhail Aleshin: His campaign came to an end after seven races, at which point he was leading the points standings, when he got the break he had been waiting for. Kubica had crashed heavily in the Canadian Grand Prix, and with the next race at Indianapolis just one week later Vettel was called up to replace him.

He began the weekend with the second fastest time in final practice before racing to eighth place and becoming the sport’s youngest ever points scorer.

Kubica return meant Vettel was back in his supporting role at the next round. But Red Bull didn’t wait long to make their move. Scott Speed had struggled at thier junior team Toro Rosso throughout 2006, and Gerhard Berger was anxious to replace the American with Vettel.

Speed was ejected after the European Grand Prix and Vettel made his second F1 start, now with Toro Rosso, in Hungary. A collision with future team mate Mark Webber in a rain-soaked Japanese Grand Prix earned him instant notoriety, but a mature drive to fourth in tricky conditions one week later in China underlined his potential.

Vettel’s arrival in the top flight was timely. After claiming his first win in 2008 he was promoted to Red Bull’s top team in place of the retiring David Coulthard. That coincided with the first of Adrian Newey’s front-running designs for the team, and together with Vettel they became the powerhouse outfit of the next four seasons.

Browse all Route to F1 articles