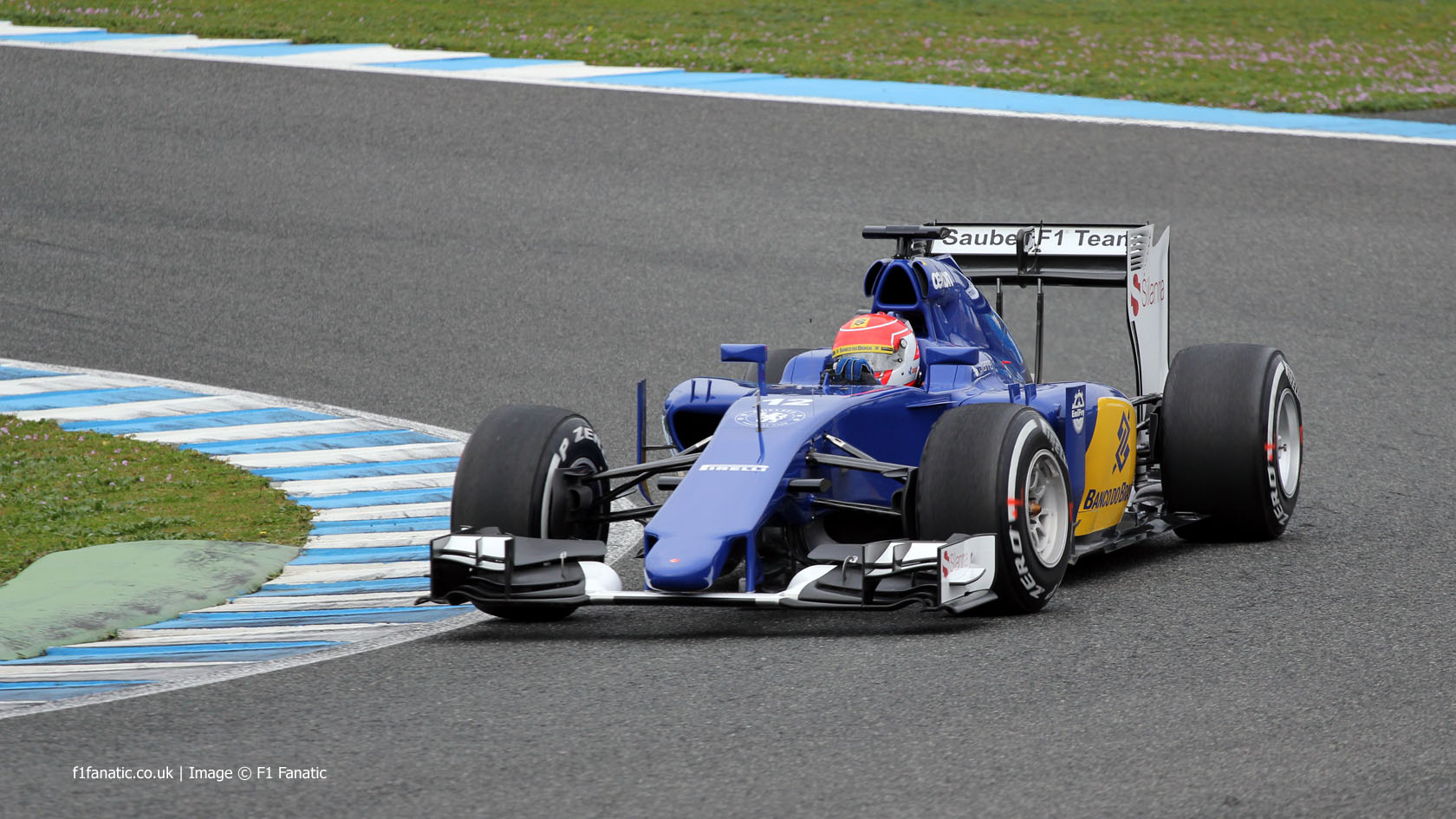 Sauber’s Felipe Nasr topped the time sheets on the third day of the opening test at Jerez – but only after suffering a spin at Turn Nine earlier in the day.

For the third consecutive day, the two Ferrari-powered cars clocked the quickest times, but with Sauber beating out Ferrari to the top spot.

A slightly damp track greeted the drivers as the lights went green at the end of the pitlane to begin the third day of the opening pre-season test of 2015.

Felipe Massa soon made his first appearance of the test in the FW37, while Kimi Raikkonen turned his first laps in the Ferrari SF15-T with a sizable aero rake adjourning the left side of the car.

After a difficult start to the test over the first few days, McLaren were also quickly up and running with Fernando Alonso immediately taking to the track in the Honda-powered MP4-30.

Unlike the previous two days, the team were able to complete multiple lap runs in the car and in just over an hour, the McLaren driver had achieved more laps than the team had managed in the first two days combined.

Following a productive first day in the Sauber yesterday, Felipe Nasr’s second day in the car did not all go according to plan as the rookie spun the C34 in Turn Nine, beaching the car in the gravel and bringing about the first red flag of the day. The car was recovered back to the pits.

Despite the track being virtually dry when the session restarted, teams opted to remain on Pirelli’s new Intermediate tyres.

Raikkonen began to trade fastest laps with Nico Rosberg’s Mercedes, which was quickly logging far more laps than the opposition once more.

After being hampered by a telemetry problem early, Lotus became the final team of the day to take to the track with Pastor Maldonado getting hastily up to speed in the E23.

By this time, the teams had fully switched over to dry compounds. Nico Rosberg put in a long, consistent stint on the Hard tyres, before pitting for Mediums.

But Rosberg’s stint on the softer rubber was cut short when the W06 slowed to a stop just before the chicane, resulting in the second red flag stoppage of the day.

When the session was restarted, Felipe Nasr became the surprise name on top of the timing screens when the Sauber driver posted a 1’24.052 on Medium tyres.

Despite having ground to a halt just after midday, Nico Rosberg was soon back out on track and immediately set the quickest time of the day with a 1’22.835.

After enjoying their most productive morning by far, McLaren announced that a cooling issue would sideline them for the rest of the day. Alonso completed 31 laps over the course of the morning.

Another team that was also experiencing difficulties was Red Bull. Daniel Ricciardo managed some early running, but an engine trouble left the Australian stuck in the pits for most of the day before the team were able to get him back out in the afternoon.

Back on track, Raikkonen and Nasr began to trade fastest laps between the two Ferrari-powered cars. Raikkonen briefly took the top spot from the Sauber, before Nasr responded with a 1’21.545 on Soft tyres to retake fastest lap honours.

There was a flurry of activity in the final hour, but few improvements made to times. Pastor Maldonado stopped on track in the Lotus between Turns Five and Six, ending proceedings a minute early with a red flag.

58 comments on “Nasr quickest on day three despite early spin”