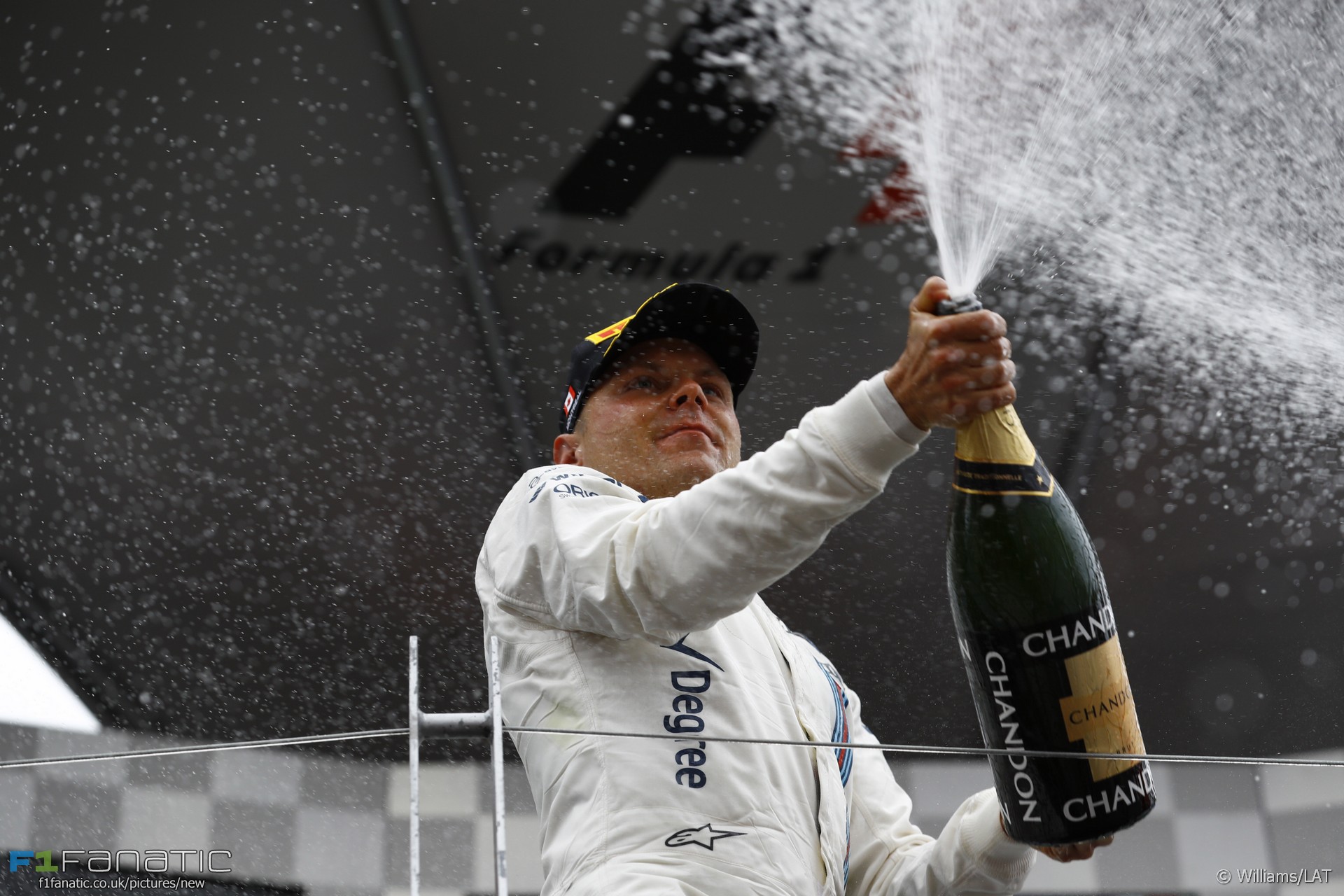 Mercedes have handed the most coveted seat in Formula One, and a potential shot at the 2017 world championship, to Valtteri Bottas.

Like his predecessor Nico Rosberg, Bottas he joins the team having spent his entire F1 career to date at Williams. And while he’s had few opportunities to mix it at the very sharp end of the field, we have seen a few clues of the potential which Mercedes obviously feel is waiting to be unlocked.

Appropriately the driver of car number 77 has started 77 grands prix to date. Here’s seven of them which show why he deserves his shot at the big time.

In his seventh F1 race weekend, Bottas had his first taste of the Circuit Gilles Villeneuve. He proved completely undaunted by the narrow, fast and barrier-lined track – even when rain began to fall at the end of Q1.

Realising a place in Q3 could be his if he nailed his first flying lap, Bottas overtook Jenson Button’s McLaren as he came around to begin his run. This proved vital: Button failed to get across the line in time while Bottas comfortably gained a place in the top ten. Team mate Pastor Maldonado, mired in traffic, was almost one-and-a-half seconds slower.

Bottas proved his effort was no fluke in the pole position shoot-out. With all ten drivers running on intermediate tyres he was beaten only by Sebastian Vettel (Red Bull) and Lewis Hamilton (Mercedes). He took third on the grid, shading Nico Rosberg’s Mercedes by one tenth of a second and Mark Webber’s Red Bull by three-tenths.

In a lousy season for Williams this was six places higher than their next-best qualifying performance (which Bottas also achieved). This was a clear case of a driver taking advantage of mixed conditions to deliver a result which was far beyond what the car deserved. In the dry race he inevitably slipped back to 14th place, which was little better than the FW35 deserved.

The must-have piece of aerodynamic trickery in 2013 was a ‘Coanda effect exhaust’. But Williams struggled to perfect this innovation in their factory. Late in the year they put the FW35 in Toyota’s wind tunnel at Cologne, didn’t like what they saw, and scrapped their effort at the Coanda exhaust.

Bottas swiftly rewarded the team’s difficult but correct decision. At the Circuit of the Americas, the second race since the change, he took the car into Q3 for the first time on a dry track all season long. His verdict on his own efforts was that he could have been seventh; Maldonado was back in seventeenth.

The car was clearly a better-balanced proposition in the race as well, and Bottas duly delivered his first points with eighth place. En route he impressed by sweeping around the outside of Esteban Gutierrez at turn two, and kept Rosberg’s Mercedes in his mirrors too.

The arrival of Mercedes power in 2014 turned Williams into a much more competitive proposition. Bottas scored the first of his nine career podiums to date with third place at the Red Bull Ring, but went one better next time out at Silverstone.

This hadn’t seemed likely after qualifying, where Williams slipped up in a rain-hit session by failing to get their drivers onto slick tyres quickly enough. The FW36, like its successors, also proved distinctly less well-suited to wet conditions.

Bottas therefore lined up 14th on the grid. However a great start – not always one of his strengths – propelled him to ninth place prior to an early red flag. Once the race resumed he swiftly made up more ground, demoting not just the slower Renault-powered cars but also fellow Mercedes users including both McLarens and Nico Hulkenberg’s Force India.

As early as lap 16 he had just the two race-leading Mercedes ahead of him. By the time Bottas had made his sole pit stop at half-distance a gearbox problem had sidelined Rosberg. When the two-stopping Red Bull of Sebastian Vettel headed for the pits, Bottas was rewarded with an excellent second place.

Bottas continued his mid-2014 purple patch at the Hockenheimring with another second place. Impressively, he took full advantage of a rare opportunity to beat one of the much quicker Mercedes.

A brake problem during qualifying pitched Hamilton into a barrier and consigned him to a tail-end start. Bottas almost used that windfall into a pole position start: he was quicker than Rosberg around the first ten corners on his final flying effort, before a touch of understeer left him 0.2 seconds down.

But from his front row start Bottas was in a strong position to outrun Hamilton. Mercedes pushed him hard, three-stopping Hamilton to give him the maximum pace advantage, while Bottas preserved his track position by only making two visits to the pits.

Over the final laps Bottas resisted Hamilton’s much quicker car with great poise. He took extra care at the first two corners to ensure Hamilton didn’t get too close ahead of the DRS zones and juggled the Mercedes power harvesting and deployment settings to perfection, allowing him to come out ahead.

Still in pain from a back injury which forced him out of the Australian Grand Prix two weeks earlier, Bottas showed tremendous grit in one of the most punishing races of the year.

It didn’t start well: a slip-up with his tyres in qualifying meant he started behind Massa, and an overly-cautious first lap left him 14th. Running behind his team mate meant Bottas had to pit after him, but he helped himself by overtaking Max Verstappen and the two Red Bulls.

Bottas had to pass Verstappen a second time after his pit stop, which he did, putting him back on Massa’s tail. On the penultimate lap he got around his team mate on the outside of turn five.

Bottas took the flag in an excellent fifth place with only the faster Mercedes and Ferraris ahead. This was some effort given his back condition and starting disadvantage.

Bottas had been on course for a podium finish at Sochi in 2015 when a kamikaze move by Kimi Raikkonen left the Williams in the barriers. Two races later the two Finnish drivers went wheel-to-wheel again.

This time Bottas wasn’t to be denied. He’d made his first pit stop just eight laps into the Mexican Grand Prix to put a quicker set of medium tyres on and was eager to take advantage of his tyre life advantage over the Ferrari driver. He drew alongside at turn four and when Raikkonen swung towards the turn five apex as if the Williams wasn’t there, Bottas stood his ground.

This time it was the Ferrari which came off worst, Raikkonen’s race ending on the spot. The stewards deemed it a racing incident.

Bottas pressed on and with a little good fortune claimed the podium he’d been robbed of two races earlier. A late Safety Car period offered the chance of a free pit stop, and on fresher tyres he easily took third off Daniil Kvyat.

Year four at Williams was something of a disappointment for Bottas as the car was no longer quick enough to regularly challenge for podiums against the likes of Mercedes, Red Bull and Ferrari. But when he achieved the team’s only rostrum appearance of the year he did it on a day when all of those teams’ cars reached the chequered flag.

‘Tyre management’ is not a phrase which makes the heart beat faster, but it was key to two of the best result Bottas delivered last season. After ditching his ultra-softs on lap 22 he still had more than twice as many laps left to cover. His 47-lap stint on softs was longer than any other driver bar Fernando Alonso, who finished outside of the points.

Bottas executed his strategy perfectly, jumping both the Red Bulls. With Rosberg struggling and failing to pass Verstappen, and Raikkonen queued up behind them, Bottas snatched an unlikely but hugely satisfying third place.

He pulled off a similar trick later in the year at Sepang. But by this point Williams were no longer in a position to fight the leading teams, and getting home ahead of Nico Hulkenberg and Sergio Perez was the best that could have been expected of Bottas.

Bonus race: Bottas takes on Ricciardo in their pre-F1 days

Any excuse to re-run this clip is always welcome. Bottas beat Daniel Ricciardo to the 2008 Formula Renault 2.0 Eurocup crown but the highlight of their season which this thrilling scrap between the pair at Silverstone. Ricciardo prevailed – just.