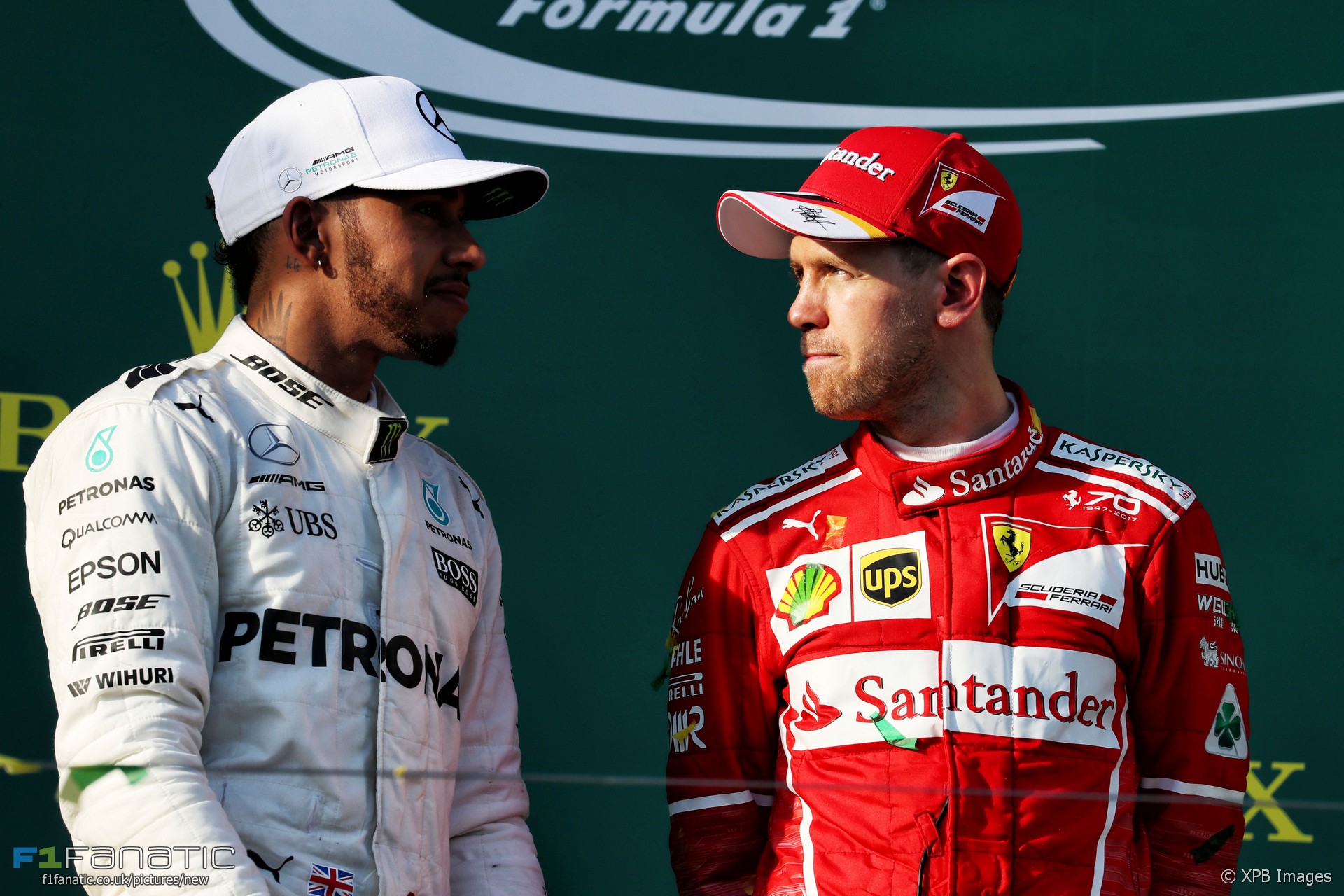 The Ferrari scrambled into turn one with the Red Bull perilously close behind. And hot on their tails came a Mercedes, desperately eager to pounce on any slip-up between the pair.

Pressing on to turn three Sebastian Vettel covered off the inside line as Max Verstappen looked for a way through. The new, wider wheels of the new, wider RB13 touched the grass on the entry to the corner, but Lewis Hamilton was unable to seize the opportunity to pass.

This brief burst of action was the three-team battle we’d hoped to see in 2017. It only lasted for a few seconds, but it decided the outcome of the race, and raised hopes of an unpredictable season ahead.

Hamilton’s Mercedes started the Australian Grand Prix from pole position, just as it had done in 2014, 2015 and 2016. But the race which followed indicated that unlike the last three years this isn’t going to be another ‘silver-wash’.

The 68th running of the world championship began a couple of minutes later than planned owing to a mix-up on the grid. That offered a brief glimmer of hope to Red Bull, who were scrambling to effect last-minute repairs to home hero Daniel Ricciardo’s car following a reconnaissance lap breakdown. It wasn’t enough, however, and he joined the track on lap three.

Once the five lights went out the first pre-season expectation was dashed. Despite the tricky new clutches no one made an auspiciously good or bad start. The top five held grid order: While Verstappen got ahead of Kimi Raikkonen on the run to turn one he couldn’t carry the momentum through the first corner to keep the position.

Having failed to get past Hamilton at the start Vettel immediately put his rival under pressure. But after three laps of sitting in close proximity to the Mercedes, Vettel gradually slipped one-and-a-half seconds behind. But the race was only just beginning.

With more durable tyres underneath them the pace was far fiercer than last year. Instead of lap times steadily rising as drivers nursed fragile tyres as long as they dared, the pace was increasing as the fuel load came down.

But Hamilton wasn’t comfortable in his lead. “I was struggling with the grip from the get-go,” he said afterwards. His attempts to break clear of the Ferrari stalled. “Sebastian was able to always answer in terms of lap time and the majority of the time do faster lap times.”

On lap 13 Hamilton set his quickest lap so far, a 1’28.117. But the next time around he was almost a full second slower, and on subsequent laps he couldn’t replicate his best time. “I got a bit in traffic and the car started to overheat the tyres,” he said. “I was struggling with grip and it was to the point that I needed to come in.”

This didn’t appear to be the ‘cliff edge’ of tyre degradation we’ve become used to from recent seasons. But Mercedes were adamant they needed to get Hamilton off his ultra-softs.

“Sebastian came into the window where the undercut was possible and we had the feeling at that point that the tyres were not lasting,” he said. “It was the team’s impression on the pit wall looking at the data and Lewis’ in the car, too.”

So Hamilton committed to coming in one lap earlier than he had been scheduled to. The problem with this strategy was that it would drop him behind Verstappen. The Red Bull driver had some good gaps opening up behind him so Mercedes had cause to hope he might pit soon anyway, but things didn’t work out in their favour.

Hamilton rejoined the track after a straightforward stop and immediately rattled off a 1’27.551, more than half a second quicker than anything Vettel had done up to that point. But now he was within a second of Verstappen and he began losing time.

There was only one lap on which Vettel could have pitted and come out in front of Hamilton, and to their credit Ferrari nailed it. Vettel only took two-tenths off Hamilton on lap and four more the next time around. But lap 22 was a disaster for Hamilton: he lost 1.3 seconds, and Vettel made further inroads on the next tour despite having caught the tail of a four-car train.

Vettel estimated he lost a second behind newcomer Lance Stroll but a tidy turnaround by the Ferrari team meant he emerged from the pits with Verstappen and Hamilton in his mirrors. He kept the Red Bull at arm’s length at turn three and it was job done.

At this point Vettel only held the ‘net’ lead of the race. Valtteri Bottas, in his first race for Mercedes, briefly headed the field before he pitted and handed the lead to compatriot Kimi Raikkonen. The other Ferrari driver had lost so much time over his first stint that his team mate was less than four seconds behind Raikkonen when he pitted and Vettel regained the lead.

Bottas had a difficult first stint in which he “felt like I was just sliding around, always missing front grip, rear grip.” He looked much more comfortable after switching to soft tyres and having done so much later than Hamilton was able to close on his team mate towards the end.

While the Ferrari and Mercedes drivers opted for softs, Verstappen took a set of super-softs when he came in on lap 25. That also released Hamilton, but by now Vettel was six seconds up the road.

Daniil Kvyat ran a long, 34-lap first stint on a set of used super-softs which gave him a temporary hold on sixth place. His eventual pit stop promoted Felipe Massa in his place, the Williams driver having a solitary run on his return from the retirement that never was.

Behind him lay a close battle for seventh. Sergio Perez had pulled off one of the race’s few overtaking moves to claim the position, a gem of a pass on Carlos Sainz Jnr around the outside of turn three. Toro Rosso decided to give Kvyat a crack at Perez using his fresher tyres and so Sainz, after some cajoling, agreed to let his team mate by.

But Kvyat had no more success with the Force India than his team mate had. The plan was for him to give Sainz his place back, but a second pit stop to refill his engine air took care of it anyway, despite his pleas to be left out.

With Kvyat restored to ninth, Fernando Alonso was on course for an unlikely tenth position in his McLaren. The car which had failed to complete a race distance in testing got within seven laps of claiming a point before worsening damage forced Alonso out.

Esteban Ocon dodged past the McLaren for the final point, rebuffing an attack from Nico Hulkenberg’s Renault as he did. “I had massive double tow from them,” said the Renault driver, “so I gave it all with overtake mode and DRS.”

“It was quite spectacular and must have looked pretty good from the outside too.” It did, but there were precious few moments like it. As some drivers had been predicting since the rules were first mooted a year and a half ago, more downforce meant more turbulence which meant less overtaking.

“Even in the years before it’s been difficult to follow once you get within one and a half, one second just because of the turbulent air which messes up the aerodynamics of the car,” explained Bottas. “Now, as more of the grip from the car is relying on the aero it’s a bigger effect and the cars are wider so I think there’s more turbulent air so now I think it’s more like two
seconds or even two and a half.”

The first race of the season often takes a toll on the equipment and this one was no different. Marcus Ericsson and Kevin Magnussen tangled on the first lap and later retired, Sauber fuming at the lack of punishment for the Haas driver in this new era of more lenient stewarding.

Romain Grosjean joined his team mate in retirement with an engine failure. This was a disappointing end to a promising showing: he’d been in the top ten every session.

Rookie Stroll’s first race nearly ended at the first corner, where only a desperately hard slam on the brake kept him from wiping out several of the tail-enders. The lock-up damaged a tyre, forcing an early pit stop. That spoiled his race, and a hair-raising brake failure on the rapid approach to turn 13 ended it.

However the other rookie in the field, Sauber’s Antonio Giovinazzi, did a sterling job to get the C36 to the chequered flag. The car had been upgraded since his introduction to it in the first test at Catalunya, and having not run on Friday he’d done less than half a race distance around Albert Park before the grand prix began, yet he delivered a clean run and gave a good account of himself.

“I’m going to get you back”

The Australian Grand Prix may not have been a vintage encounter but the sight of Mercedes having to battle a rival on pure performance has been a rare one over the past three years. Even Hamilton seemed to welcome a serious threat appearing from outside his own team.

Between them Hamilton and Vettel have won six of the last seven world championships. Yet they’ve faced each other on track only occasionally.

One notable encounter between the two occured when Hamilton was poised to clinch his first world championship title, only to drop out of the crucial fifth place when Vettel overtook him.

“He’s very very quick, very talented but also working hard,” said Vettel of his rival. “I think it was a matter of time before he won the world championship which I tried to stop him doing in Brazil, as hard as I could, in my Toro Rosso.”

“I’m going to get you back,” joked Hamilton. And perhaps he will. But after round one of 20 it’s Vettel who holds the upper hand.