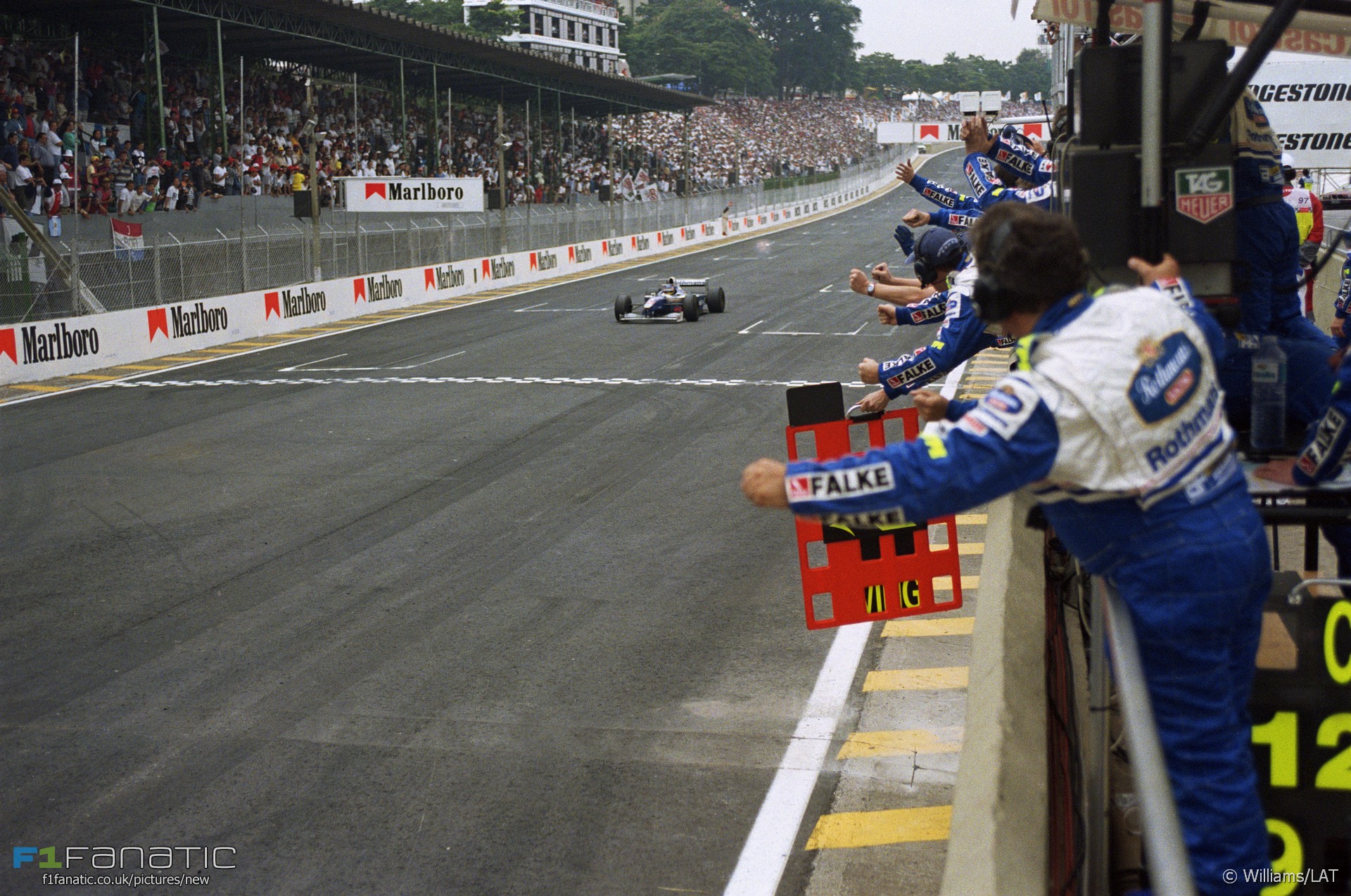 Jacques Villeneuve bounced back from his turn one retirement at the first race of 1997 by winning the second race of the season in Brazil on this day 20 years ago.

The promised showdown between him and Michael Schumacher, who he shared the front row with, failed to materialise. Instead the big shock of the race was not the performance of a driver or car, but a tyre supplier.

Bridgestone, in only the second race of their first full year of competition, pulled off a major shock as Olivier Panis took their rubber to third position. It was a result which had major implications for the rest of the championships.

The weekend began on a sour note. Lola, one of the two new teams which had entered the championship at the beginning of the year, abandoned their F1 programme after a single appearance. The T97/30s arrived at Interlagos but took no part in the race weekend.

The team’s sponsor Mastercard had attempted to fund the programme using subscriptions from its credit card users, paying between $79 and $2,999 each. The plan failed, and Lola later went into receivership.

It was the latest in a long line of teams to abandon its F1 hopes. But while teams dropping out of Formula One was nothing new, the rate of new entries coming in to replace them was slowing. And the FIA’s plan in the wake of the Lola debacle to make new entrants lodge a multi-million dollar bond, in order to prove they had sufficient funding, meant very few new teams followed in the wake of Lola and fellow 1997 newcomers Stewart.

Williams had locked out the front row of the grid in Melbourne but come away with nothing. In Brazil they were again clearly the quickest team again, though not immune to the difficulty of riding the notorious Interlagos bumps.

Jacques Villeneuve claimed pole position again with little drama besides a water leak in a radiator which forced him into the spare car. “There wasn’t much left in it,” he said afterwards, “only a couple of tenths, maybe”.

His new team mate Heinz-Harald Frentzen arrived under scrutiny having been blown away by 1.7 seconds in qualifying in Australia. He headed the first practice session but ended Saturday almost a second off Villeneuve. Whereas in Melbourne he’d started alongside his team mate, this time there was six cars between them.

Nor was Frentzen pleased to see Damon Hill, the reigning world champion whose place he’d taken at Williams, lining up in the next slot in his unfancied Arrows. After the embarrassment of their star driver failing to start in Australia the team had made significant progress, logging over 600 laps in testing at Paul Ricard.

Nonetheless Hill was unimpressed when his throttle jammed open 12 laps into first practice in Brazil. “Not the sort of thing you want to experience for any reason,” he said of the latest in a series of breakages for the A18.

Frentzen’s struggled opened the door for Schumacher to join Villeneuve on the front row. His team mate was also struggling: Eddie Irvine was back in 14th place. “I know one person who is happy,” said Schumacher in the post-qualifying press conference, drawing attention to a smiling Villeneuve, who had sharply criticised Irvine for the Ferrari driver’s role in his Melbourne retirement.

Gerhard Berger brought cheer to Benetton with third on the grid. The wily old-timer had played a cunning tactical game in qualifying, leading the field out for a late restart to present an obstacle to anyone who might beat his team.

The red flag had been caused by Giancarlo Fisichella who crashed his Jordan at Mergulho. “Maybe too much speed,” he explained in his improving English. “I try flat throttle. Not possible!”

Melbourne winner David Coulthard struggled to 12th while his McLaren team mate Mika Hakkinen lined up on the second row. Behind the quartet of Goodyear runners at the front lay Panis, who several had already identified as a potential threat in the race due to his more durable Bridgestone tyres.

Three weeks on from the embarrassment of retiring from the season-opener due to running out of petrol, Jean Alesi took sixth in his Benetton. Team principal Flavio Briatore, probably joking, said he was “going to hang out a gun” if Alesi failed to come into the pits this time.

Having started badly from pole position in the previous two races, Villeneuve had drilled his practice starts in a test at Paul Ricard before the race. But after leading the field around a somewhat slow warm-up lap he again failed to get off the line cleanly, and Schumacher was immediately by into the lead.

Villeneuve understeered wide into the downhill Senna-S bend but behind him there was chaos. Fisichella spun into Hill and Magnussen made contact with Irvine. Rubens Barrichello had failed to get his Stewart off the line, and the race was swiftly red-flagged.

This was came as a relief to Villeneuve after his trip across the gravel. “There were rocks in the seat and it was not very comfortable,” he said. “At least the mechanics were able to clean them out. It would have been pretty uncomfortable if the red flag hadn’t come out.”

More importantly it also restored him to pole position. Barrichello, Fisichella and Frentzen also got second chances, switching to their spare cars for the restart.

The second time of asking Schumacher beat him to turn one but Villeneuve kept his car on track and stalked the Ferrari around the rest of the first lap. He pulled out to pass the Ferrari as they came past the pits for the first time and cut the timing beam a thousandth of a second before his rival.

Ferrari had been struggling to warm Goodyear’s tyres up to the correct temperature and had chosen to run higher levels of downforce. But that made the car more draggy, and once Villeneuve was by Schumacher soon had Berger bearing down on him. He rebuffed an attack from the Benetton on lap eight but four laps later Berger was through.

Schumacher regained second when Berger pitted on lap 22. But staying out another four laps cost the Ferrari driver: he fell behind Hakkinen and Hill. Hakkinen quickly passed the one-stopping Arrows but Schumacher took another six laps to get by into fourth. Alesi followed him through before Hill made a belated arrival in the pits, having missed his first signal to come in.

Hill’s fellow Bridgestone user Panis had risen as high as second before pitting just before the halfway mark on lap 35. “When we were discussing strategy it was Alain [Prost] who pushed for one stop,” said Panis. “I pushed for it, too, because the tyre wear figures were fantastic.”

He rejoined the track in seventh but within ten laps was back up to third as the two-stoppers made their second visits to the pits. Berger ran a very long middle stint and briefly led before dropping back behind Villeneuve and just four seconds ahead of Panis. The stealthy Prost driver rose to third place despite only setting the 12th-fastest lap of the race.

Schumacher had to settle for two points for fifth place behind Hakkinen. Just one-third of the 18 classified finishers were awarded points, the last of them being Alesi.

Frentzen concluded a miserable race in ninth position. He was the last driver not lapped by his race-winning team mate who finished 75 seconds ahead of him – an average of more than a second per lap. “I just couldn’t get the handling right,” he said. Wisely, Frentzen opted to cancel a planned post-race holiday for talks with team principal Frank Williams over his performance.

Hill was classified despite dropping out with an engine fire four laps from home. He had already gone a lap down. But arguably no one had endured a tougher race than the much-maligned Irvine.

One of the Ferrari driver’s crotch straps was too short, leaving Irvine in excruciating pain every time he touched the brake pedal. Having radioed his team to warn them he was having difficulty coping he accidentally left the radio open and his shrieks could be heard. “They must have at thought I was having orgasms or something, and the excitement of the race,” he speculated. “It was the worst pain I think I’ve ever had.”

There was no repeat of the late-race brake failure which hit Williams at Melbourne, though Villeneuve was plagued by a soft pedal which gave little feeling all race. The only other problem he encountered came after the chequered flag: He stopped his car on the sloped straight and it began to roll after him, almost knocking him over.

While Berger’s second place brought relief to Benetton, third place for Panis meant Goodyear had to take their new Japanese rivals seriously. Bridgestone’s Hirohide Hamashima admitted he “could see they were very worried” after the race.

Goodyear had the pick of F1’s teams at the beginning of the year, including Williams, Ferrari, Benetton, McLaren, Jordan and Sauber. Bridgestone “were supplying only lower ranked teams”, said Hamashima, but were already finishing in positions which were “so much better than expected”. In the coming races, Goodyear would have to respond.