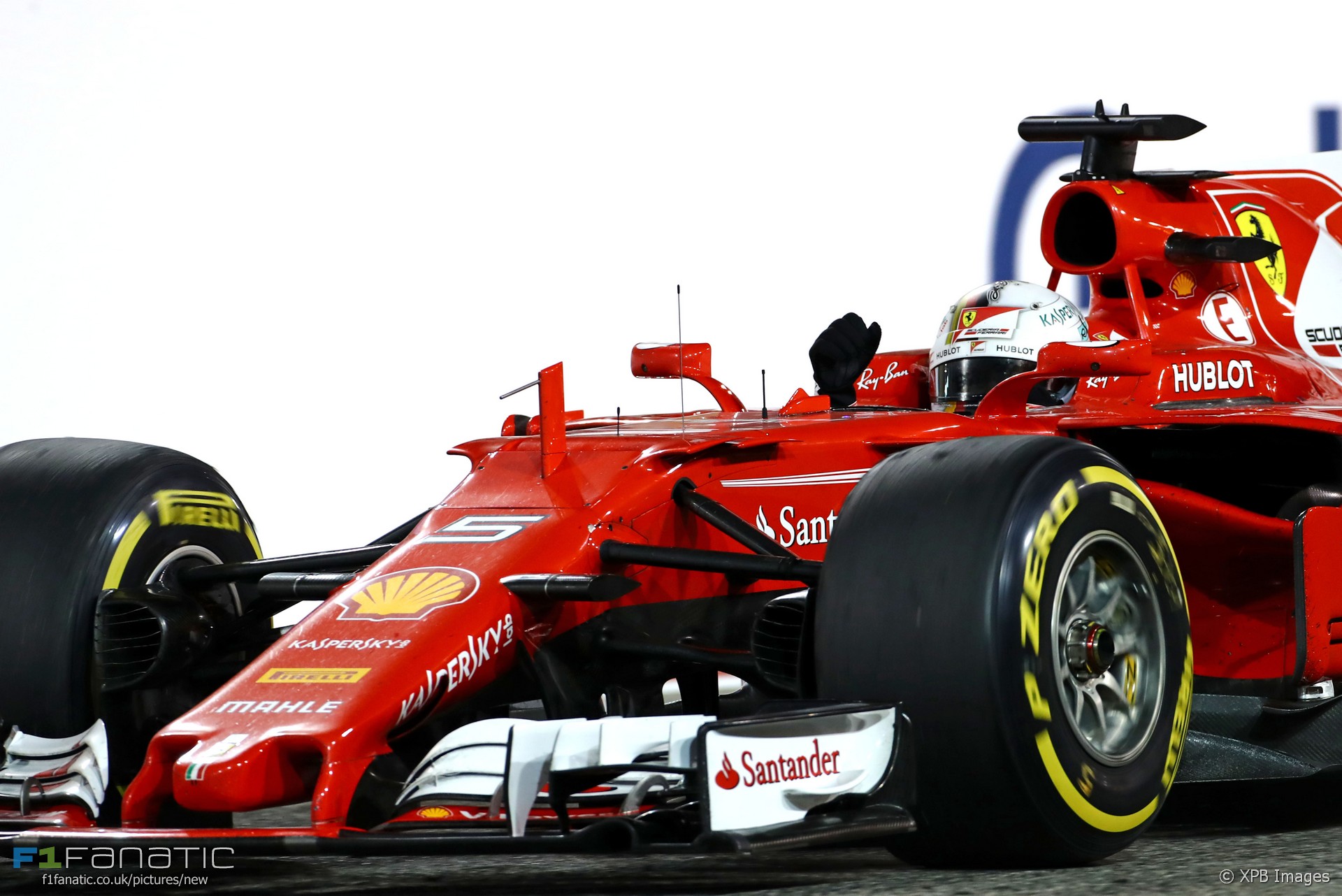 This was a close one. Over the 57 laps of the Bahrain Grand Prix there were perhaps a dozen moments which could have swung the outcome one way or another.

But when the chequered flag fell it was Sebastian Vettel at the head of the field. His second victory from the opening three races confirmed Ferrari’s status as genuine championship contenders for 2017.

The first significant moment came before the race even started. Valtteri Bottas had taken pole position for the first time in his career but a problem with a generator meant his tyres were accidentally over-pressurised.

He kept his lead at the start, but soon had a train of cars backed up behind him as he struggled for pace. Vettel led the pursuers thanks to the race’s second significant moment: He overtook Lewis Hamilton on the run to turn one at the start.

“It was crucial for us to get between,” Vettel said afterwards, “to not allow them to get in their rhythm, pull away, do their thing. So, upset them a bit.”

“I think we all had more or less the same start. Mine initially was maybe a tiny bit better than Lewis, which put me just about side-by-side – but their car is really long so it’s a long way to get side-by-side.”

The second Ferrari of Kimi Raikkonen got away poorly, losing places to Max Verstappen (who also got ahead of his team mate for fourth) and Felipe Massa. It took Raikkonen until lap eight to retake Massa in the DRS zone, but the leaders were lapping so slowly he only lost around six seconds.

Red Bull suspected Bottas was doing some kind of extreme tyre saving but his team later confirmed the tyre pressure problem in the radio. Ferrari were looking for a gap further back into which Vettel could emerge following a pit stop, and by lap nine they believed they had one between the Force Indias and Jolyon Palmer.

Vettel duly arrived in the pits on lap ten for a rapid service from the Ferrari mechanics. Once back on the circuit he immediately lapped almost two seconds quicker than Bottas in the middle sector of the lap alone. But would he be able to sustain a quick enough pace once he hit traffic? This was never put to the test.

On lap 12 Carlos Sainz Jnr, returning to the pits after his own stop, thumped into Lance Stroll’s Williams, putting both out. The Safety Car was summoned to recover their cars.

This could have gone either way for Vettel. In China last week the Safety Car ruined his race, allowing the leaders to quickly pit and maintain their positions. But this time the Safety Car was deployed as the leaders neared the end of the lap, meaning they stood to gain less. And there was another reason why Vettel returned to the lead after the Safety Car period.

“There was a problem with the pit stop,” said Bottas. “We lost a lot of time and maybe it would have been very, very close. Maybe I would have been just in front but the team is still investigating what was the issue there. I think there was also some traffic as well because the stop was slow. One of the Red Bulls came into the pit lane and we couldn’t exit immediately so double the time.”

This was bad for Bottas and worse for Hamilton, who had to wait until his team mate was serviced before taking fresh tyres of his own. Hamilton’s situation worsened when the stewards ruled he had held Ricciardo up on his way in, handing him a five-second penalty. Mercedes at least took the opportunity to cover their options, giving Bottas super-soft tyres and Hamilton softs.

When the race restarted Bottas immediately put Vettel on defence. “I thought I had a decent gap leaving the last corner,” said Vettel, “and then, I don’t know, it felt like I had more headwind than in the whole race on that particular lap.”

“I was fairly confident halfway down the straight, just looked in the mirror to check and he was coming. I saw sparks behind me everywhere and then I obviously had to defend.”

Bottas kept the pressure up as far as turn four, where Vettel forced him to the outside line and ended the matter. Behind them Hamilton had immediately pounced on Ricciardo, who found so little grip from his soft tyres that Raikkonen also passed him before the end of the lap.

Soon afterwards Mercedes received word of Hamilton’s penalty. Bottas was faring better on his second set of tyres but still not lapping quickly enough. Even so the team appeared reluctant to force their drivers to swap places.

Vettel had no problem covering Bottas off with his own stop three laps later. But what was Hamilton going to do? Even if he could nurse his soft tyres until the end Vettel would only have to finish within five seconds of him to win the race.

Mercedes opted for a final pit stop in which the five-second penalty could be served (more successfully than they did for Nico Rosberg in Germany last year) and Hamilton given a fresh set of tyres to chase Vettel down with. But which tyres would he take for the final stint? A set of super-softs had been left untouched during qualifying.

“I was expecting him to be quick on a new set of super-soft tyres,” said Vettel afterwards. Two laps before Hamilton came in Ricciardo pitted for super-softs of his own. But Mercedes felt softs were the way to go.

“I thought it was going to be a super-soft but honestly I think the tyre was the best one,” said Hamilton, “particularly for 16 laps pushing at the pace I was going was a long way to go. I don’t know if the super-soft would have lasted that long.”

But even after Mercedes ushered Bottas aside for a second time, Hamilton seldom looked quick enough to make the difference. Vettel lost some time in traffic but not enough to bring his rival within range. Hamilton had got the gap down to 5.87 seconds with three laps to go. Without his penalty, he might have got within DRS range.

Bottas took the final spot on the podium despite slipping back into Raikkonen’s clutches over the final lap. Ricciardo came in a lonely fifth after Max Verstappen retired early on with a sudden loss of rear brake pressure.

Massa claimed sixth for Williams ahead of Sergio Perez, who thanks to a great start, several passes and a bit of luck with the Safety Car made up eleven places to finish seventh.

Nico Hulkenberg earned Renault’s first points of the year with ninth behind Romain Grosjean and one place ahead of Esteban Ocon, who was the final points-scorer for the third race in a row.

On his return to Formula One, Pascal Wehrlein had a quietly solid run in the Sauber, bringing his car home 11th after being the only driver to one-stop. The team’s other car suffered a broken gearbox.

Wehrlein had Alonso in his mirrors with a few laps to go, the McLaren driver again making a series of comments about the shortcomings of his Honda engine before retiring. The explanation given by McLaren for his retirement was that “he felt something wrong with the car”, with no explicit cause for his stoppage being given.

Did his car fail or did he decide it wasn’t worth driving anymore? His headline-grabbing change of priorities for the end of May suggests he’s already made that decision. His team mate didn’t even get a car to drive today: Stoffel Vandoorne failed to start with more power unit problems.

The race which began with a first-time pole sitter ended with what is now the usual two faces on top of the podium. Mercedes demonstrated they’re prepared to take unpopular decisions to maximise their chances of victory, though it didn’t deliver this time.

But they will surely reflect that despite Ferrari’s speed, there were several points during the Bahrain Grand Prix in which opportunity to win the race were lost. This was a nip-and-tuck fight between F1’s two fastest teams which could have gone either way, something which will surely make Vettel’s victory taste even sweeter.