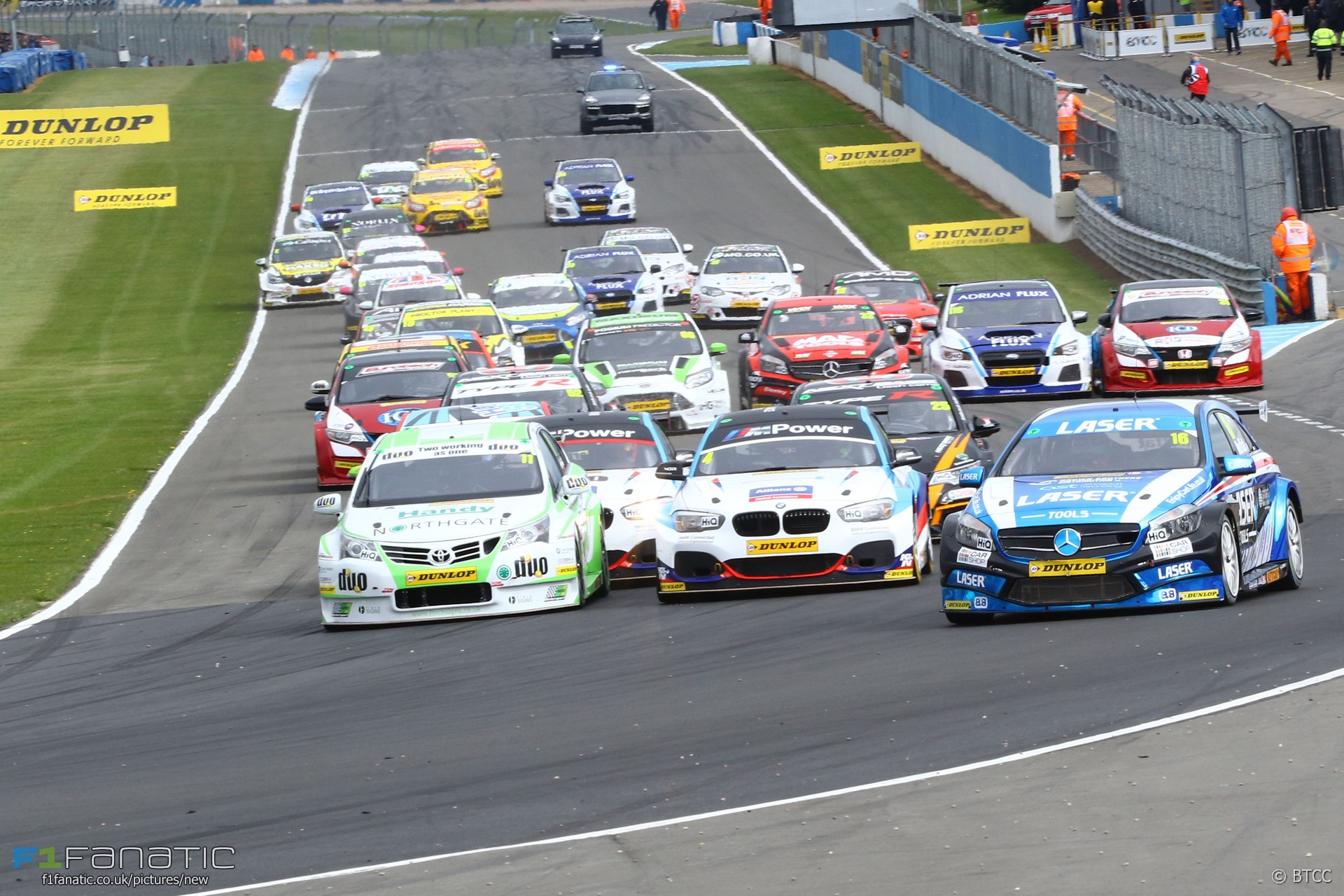 Monger hit stationary rival Patrik Palma on the approach to McLaren’s corner on the fourth lap of the race. Palma was quickly freed from his car but Monger was kept in his car for an hour and a half while medical staff carefully extricated the teenager, before taking him by helicopter to Queen’s Medical Centre in Nottingham.

Monger’s crash came after the first BTCC race of the day, which saw a maiden victory for Aiden Moffat. There had already been drama post-qualifying however, as the original pole-man – Subaru driver Ash Sutton – was excluded for an overboost issue, promoting Rob Austin to pole. Tom Ingram took the lead early on but Moffat soon eased by and away, winning from Matt Neal and Austin.

Moffat initially held onto the lead from pole in race two, but the success ballast he had to carry soon began to tell, and Ingram swiftly flew into the lead as Moffat plummeted. There was constant action throughout the field but up front Rob Collard moved into second while Sutton – who had started 31st in the previous race – took the final podium spot.

By race three the conditions had changed and an atrociously wet track greeted the drivers. Despite many stating the race should not start, the red lights went out and predictably chaos reigned with a number of cars aquaplaning at the Old Hairpin before leader Matt Neal got stuck in the gravel at McLean’s, prompting a red flag. On the restart in better conditions Dave Newsham held his lead from reverse grid pole but was soon deposed by Gordon Shedden, who flew to a comfortable victory ahead of Colin Turkington and Adam Morgan, only to then be excluded for failing the ride height test, with the team blaming damage sustained in the initial start.

The European Formula Three season began at Silverstone with a smaller but arguably stronger field than in recent years. McLaren-backed rookie Lando Norris claimed a relatively straightforward opening win of the season from pole position but had to contend with three Safety Car restarts. The first was to get the race underway on a wet track with drivers on slick tyres while a spin from Callum Ilott caused the second when he got stuck in the gravel. Ralf Aron caused the third after colliding with team mate Jake Hughes, but Norris handled it all to win ahead of Jake Dennis and Max Gunther.

Ilott started the other two race from pole position. In race two Norris struggled from second and plummeted through the field. Ilott couldhold on however, as a brilliant move around the outside of Brooklands handed Joel Eriksson a lead he never looked like relinquishing. Ilott was second ahead of Hughes as the entire field that started saw the chequered flag.

The start of race three was a repeat of the second encounter; as Ilott got away well from pole, Norris plummeted, and Eriksson then drove around the outside of Ilott to take the lead at Brooklands. Ilott was not to take this one lying down however and fought back to wrestle the lead back from Eriksson and take his first victory of the season. Norris fought back to third past Gunther, while Mick Schumacher spun out of contention early on following a collision.

Anthony Davidson, Sebastien Buemi and Kazuki Nakajima shared victory for Toyota in the first World Endurance Championship race of 2017. However the closest Porsche finished just six seconds behind after six hours of racing.

The number seven Toyota of Kamui Kobayashi, Mike Conway and Jose maria Lopez took an early lead from pole position and scrapped with the team’s other car shortly before the traditional Silverstone showers began. That proved the undoing for the team’s new driver: Lopez made an error at Copse and hit the wall.

Despite considerable damage he got the car back to the pits and the team were able to repair it and send them back out. Up front however their team mates took the lead from the number two Porsche with just over ten minutes remaining to claim the first win of the season.

Pietro Fittipaldi swept both races at Silverstone as the 2017 World Series Formula V8 3.5 championship began. At the track where his grandfather scored his final F1 victory 42 years earlier, the 20-year-old turned in a result Emerson would have been proud of by dominating both races from pole position.

Title favourite Egor Orudzhec followed Fittipaldi home in both races but was excluded from the first as his car failed a minimum weight check. Force India tester Alfonso Celis was promoted to second in race one, which along with sixth in race two means he holds second in the championship. He distinguished himself in both races with surprise passes in the high-sped Becketts sequence on Matevos Isaakyan and team mate Diego Menchaca.

Fittipaldi’s team mate Rene Binder took a pair of fourth places and holds third in the standings. The series moves on to Spa-Francorchamps where it will again support the World Endurance Championship.

Video not available yet.

Sebastian Vettel won the Bahrain Grand Prix ahead of Lewis Hamilton to extend his lead in the drivers championship. Valtteri Bottas could only manage third despite starting from his maiden pole position.

The newly renamed Formula Two championship (previously GP2) also started in Bahrain. The series us continuing to use Pirelli’s high-degradation tyres and produced two races which contrasted sharply with the F1 action.

Charles Leclerc took pole position for the feature race but Artem Markelov came on strong late in the race after nursing his tyres, passing Leclerc and Norman Nato late on to take the opening victory. The partially reversed-grid sprint race saw Honda junior Nobuharu Matsushita on pole, but he failed to leave the pits in time and was forced to start from the pit lane.

Luca Ghiotto therefore led the field away but Leclerc went on a charge, dispensing with Alexander Albon and then the race leader. Markelov again pursued an alternative strategy, starting on softs and then taking a fresh set of mediums on lap ten. Incredibly Leclerc soon appeared in the pits too, taking a set of soft tyres.

The former race leader rejoined 14th but using his fresher tyres and DRS to scythe through the field. Lapping up to four seconds quicker than Ghiotto, Leclerc re-passed his rival on the final lap to claim an astounding maiden win.