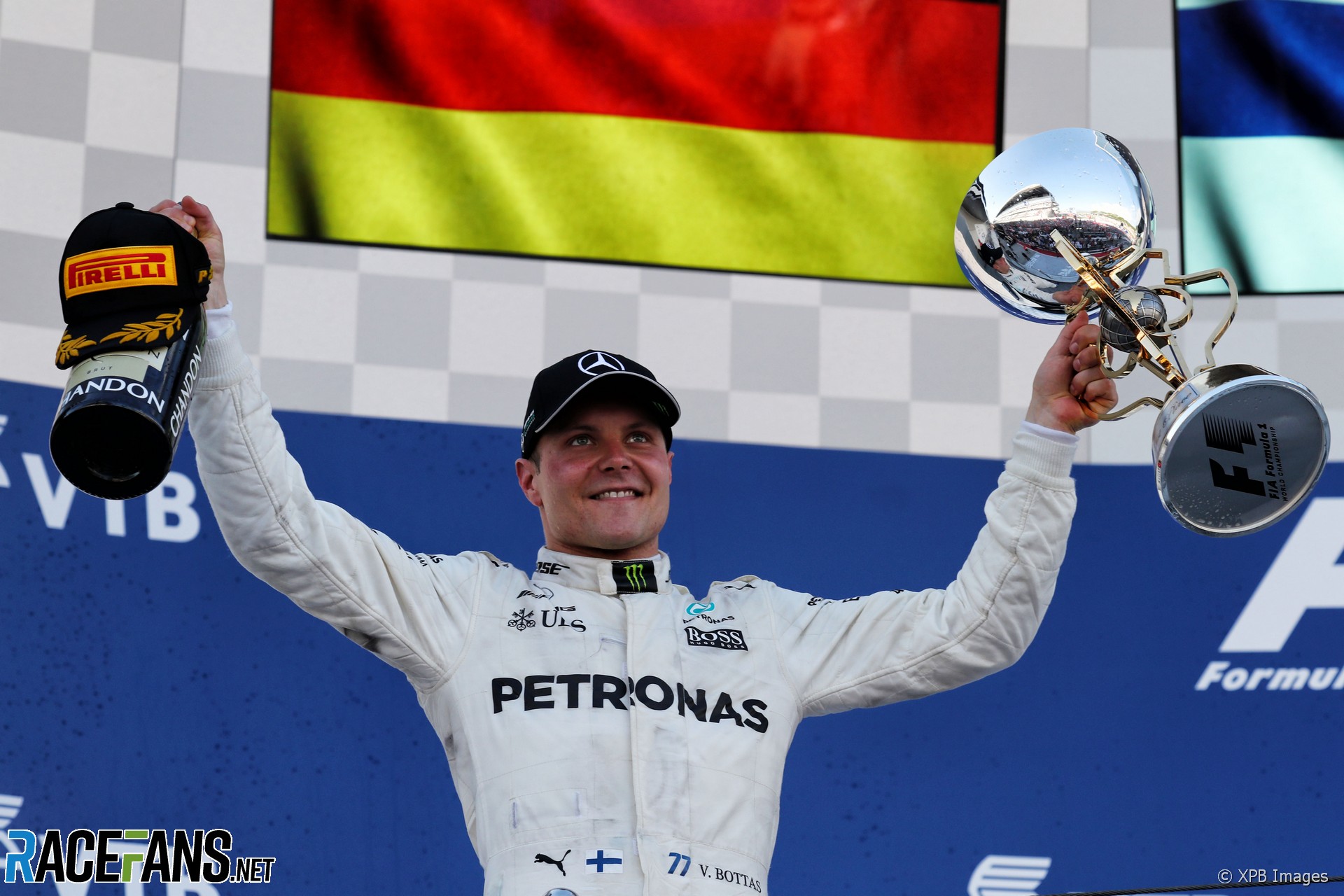 When Nico Rosberg decided in the immediate aftermath of his championship triumph to retire from F1, Mercedes faced a race against time to appoint a replacement.

The decision to hire Valtteri Bottas was criticised by some as too safe an option. Not one likely to beat Lewis Hamilton in a straight fight.

But just four races into his Mercedes career, Bottas defied the doubters and took his first grand prix victory in fine style.

Pole no advantage for Vettel

If you’re a Ferrari fan, you’re forgiven for not finding the irony amusing. For the first time in nine years the red squad had the front row to themselves, but they’d done it at one of the few circuits where it could work against them.

From the start/finish line at Sochi, around the curving turn one, the drivers would accelerate flat-out for almost a kilometre before touching the brakes for the first time. The two Mercedes on the second row had their maximum power available, and a headwind blowing from the west meant the slipstream would be even more powerful.

Making life even more difficult for pole sitter Sebastian Vettel, he pre-start preparation didn’t go according to plan when part of his dash display failed to respond properly before the formation lap.

“I didn’t get a proper read of how the grip was at the grid, so I think I ended up maybe a bit too conservative,” he admitted. Then the first start was aborted when Fernando Alonso’s McLaren broke down, so Vettel had to bring the field around one more time.

His final getaway was “good”, but not good enough. Behind him Bottas had already passed Kimi Raikkonen. “I had a look in the mirror, mine was I think better than Kimi’s. I saw Valtteri coming and I thought ‘OK, it will be close’ but it felt like I had a tent dragged behind me and he was gaining a lot.”

Vettel estimated the headwind took 10 to 15kph off his top speed. Bottas sprang out from behind him as they left turn one. “He was able even before we hit the braking to come back and shut the door. So I did well but nothing I could have done, I had the outside line but nowhere to do so in reality that’s part of where we lost the race.”

Vettel had to wait until the end of the race for his other chance to pass Bottas. Behind him Raikkonen fought to keep Hamilton behind, using the slipstream from his team mate as they approached turn two and neatly slowly at the apex to box Hamilton in. A snap of oversteer at turn four put the Mercedes back on his tail, but then the Safety Car was deployed and the scrap was over.

“We were just not quick enough”

Romain Grosjean and Jolyon Palmer triggered the yellow flags. Both had endured miserable weekends: Palmer with mechanical difficulties and a crash in qualifying, Grosjean with seemingly incurable set-up problems and yellow flags in qualifying. Their paths converged at the apex of turn two with race-ending consequences for the pair of them.

Kevin Magnussen and Stoffel Vandoorne took evasive action across the turn two run-off but failed to return the track correctly and both collected five-second penalties. Vandoorne also took the opportunity to pit and discard his super-soft tyres as did the Sauber pair, the only other drivers who hadn’t started on ultra-softs.

The restart was a critical moment for Bottas. This was the first time he’d led an F1 race at a restart, and he’d spun his Mercedes behind the Safety Car in China. But he nailed it, putting his foot down at turn 14 just as Vettel was working some more heat into his ultra-soft Pirellis. He had more than a second in hand by the time they reached the starting line: it was “kind of a surprise”, he admitted afterwards.

By getting into clean air at the start Bottas had put himself in position to use the superb long-run pace he’d found on the ultra-soft tyres on Friday. “We were just not quick enough to stay with him,” Vettel admitted. By lap 20 Bottas was five-and-a-half seconds ahead.

At this point Ferrari’s slightly better tyre life began to tell. Over the next six laps Vettel upped his pace, taking around half a second a lap out of Bottas and halving his lead. Mercedes duly headed off the threat from Vettel by summoning Bottas for his sole pit stop on lap 28. Vettel stayed out seven laps longer, and though he fell behind Bottas after his stop he now had fresher tyres and better pace.

This wasn’t the case for the other Mercedes. Hamilton, who’d been shaded by Bottas throughout practice and qualifying, was having a dreadful time. Running in the slipstream of his team mate and the Ferraris, he was repeatedly told to find fresh air to cool his radiators.

Mercedes realised that leaving him out for a long first stint and hoping for a Safety Car was their only hope of bringing him home any higher than fourth, and it was a forlorn one. He ended the race 36 seconds adrift, ten second of which he lost over the final half-dozen laps.

As the leaders gradually converged at the front it brought life to an otherwise lifeless race. F1’s fourth race at Sochi conformed to the same pattern established by the first three.

The little-used, billiard table-smooth surface extracted little from the tyres, rewarding conservative strategies. The layout, most of which is 90-degree corners, doesn’t challenge the drivers or cars.

Sergio Perez’s comments after his uneventful run to sixth place were typical. “The race today was not especially exciting for me because I was always on my own in clean air – chasing the cars ahead and pulling away from the cars behind. So there were no on-track battles and I could simply focus on managing my race and bringing home the points.”

And as usual Russian president Vladimir Putin turned up at the world capital of state-sanctioned doping for ‘bread and circuses’ purposes. But as the final laps ticked away it wasn’t certain who would win the dash to the chequered flag and an awkward chat with him in the green room.

“Over the last laps I want less talking.” Bottas was feeling the heat as Vettel’s Ferrari grew larger in his mirrors over the final laps.

He also had to contend with traffic. Increased turbulence from the new cars has made backmarkers a greater problem for the leaders this year. Turn 13, the first of a cluster of six slow corners, was the worst place to come across one. At one point Bottas got Carlos Sainz Jnr between him and Vettel here, buying himself a precious half-second of breathing space.

As they came around to begin the final lap Vettel was poised to strike, just inside DRS range. Bottas had his old team mate Felipe Massa ahead who was quick but running out-of-position due to a puncture-inflicted pit stop. This was looking close.

Luckily for Bottas he made it by the Williams as they reached turn two. That left Vettel needing to pass in the rapid turn three, where a race-long build-up of marbles awaited to catch him out. He hesitated, then dived for the inside line into turn four, but the damage was done. Vettel being Vettel, he vented on the radio, but later accepted he “did not lose the race at that point”.

Heading into turn 13 for the final time Bottas was bearing down on Pascal Wehrlein. He scrambled around the Sauber but now Vettel was back with him. They reached the line separated by just six-tenths of a second. If Vettel had just one more lap – if Alonso hadn’t broken down – he might have made it.

It wasn’t as close behind them. Behind Hamilton, Max Verstappen was a full minute adrift in the only remaining Red Bull, Daniel Ricciardo having stopped after the Safety Car period when he looked in his rear view mirror and noticed his brakes were on fire. The Force India pair were a minute and a half behind, Esteban Ocon impressive just eight seconds behind his more experienced team mate.

Ocon had the flying Nico Hulkenberg on his tail. The Renault driver had lost ground at the start but run a long, 40-lap opening stint on ultra-softs then charged after the Force India over the final laps. They crossed the line 1.1 seconds apart.

Sainz took the final point while Lance Stroll posted his first finish in 11th. Daniil Kvyat gave his team an earful after slipping to 12th, complaining about his strategy. He later softened his stance in an official statement released by the team, saying he was “maybe a bit too hard” on them, and perhaps remembering what happened to him after this race 12 months ago.

Bottas took his first grand prix victory in style. Hamilton’s race problems notwithstanding, he was clearly the quicker of the two Mercedes drivers throughout the weekend.

And this was no straightforward cruise to victory from pole position: Bottas seized his only opportunity to get ahead and had to resist a faster car at the end of the race. This was surely at least as impressive as any of his predecessors’ wins in a more superior car over the last three years.

“Apart from one lock-up under braking there was no mistake under pressure from a four-time world champion,” said Toto Wolff. “And we had quite some vibrations on both tyres after the lock-up.”

Has Bottas now given Mercedes all the justification they need to offer him a long-term contract? A glance at the points gaps between the Mercedes and Ferrari team mates shows the silver team have every reason to feel satisfied with their latest driver appointment.