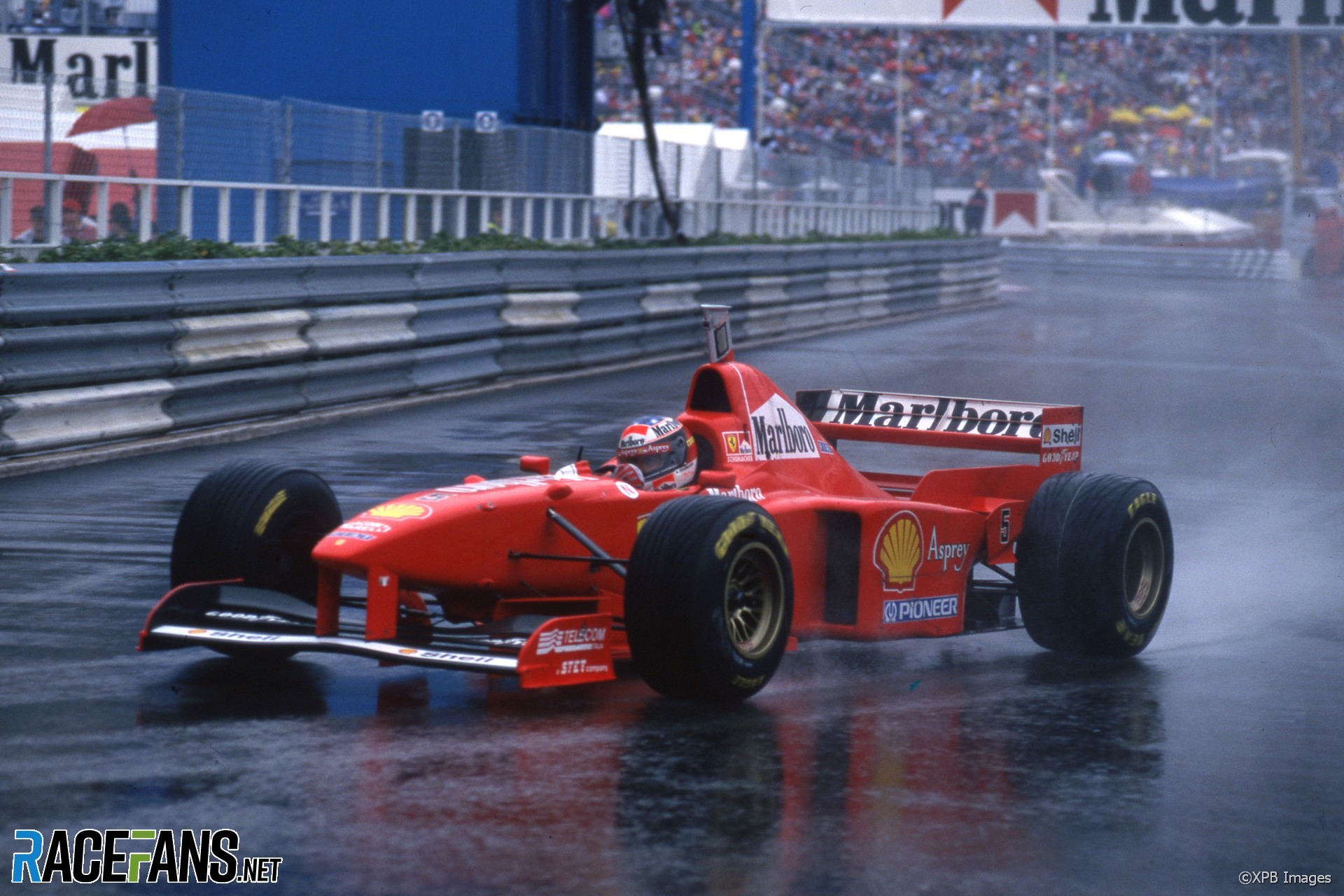 Michael Schumacher moved into the championship lead 20 years ago today with a commanding victory in a sodden Monaco Grand Prix.

But the car in second place was just as significant. New team Stewart scored a shock breakthrough result which set them on a course to becoming one of F1’s most successful teams of the past decade.

No love for F1’s newcomers

For the Monaco Grand Prix weekend Formula One’s newest team was based not in the harbourside paddock with their rivals, but a car park 15 minutes’ walk away. It was the latest in a series of unsubtle signals from F1 that their new team was not entirely welcome.

As a new team Stewart was not entitled to any of Formula One Management’s revenues – a situation they were taking legal advice over. A third-row start for Rubens Barrichello in Argentina hinted at their potential but they were yet to deliver anything in the way of hard results.

Team owner Jackie Stewart had a deep affection for Monaco where he had won three times before and had cultivated a close relationship with the ruling royal family. Eager for his new team to do justice to his Monaco achievements, Stewart scrapped a planned post-Imola test in order to spend more time ensuring the preparation of the cars for the race was not compromised and tackle reliability problems. 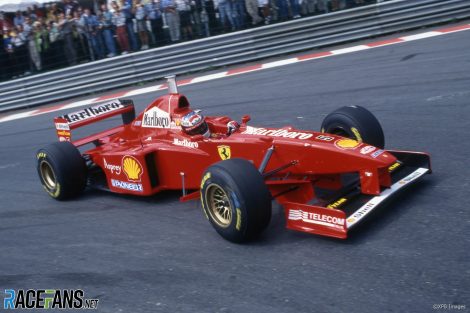 In dry conditions, drivers familiarised themselves with the latest revisions to one of the sport’s oldest tracks. The approach to La Piscine – the Swimming Pool complex – had been opened up to give drivers more space to recover if they made a mistake. “At the demand of drivers and the FIA we’ve widened that and created more of an angle to slow the cars a bit more,” explained Prince Albert.

Portions of the track had also been resurfaced. That together with the softer compounds being used because of the tyre war meant lap times dropped by over two seconds.

But for the first time in 1997 it was not points leader Jacques Villeneuve on pole position. Heinz-Harald Frentzen, fresh from scoring his breakthrough victory at Imola two weeks earlier, triumphed in a trilling one-hour qualifying session on Saturday.

Giancarlo Fisichella was revelling in Jordan’s handling and briefly put his car ahead until Frentzen knocked him off the top spot. Villeneuve was the next of the big hitter to make a bid for pole but clipped the barrier at Sainte Devote, breaking his right-rear suspension.

This eliminated one of Frentzen’s biggest rival but another, Michael Schumacher, was a major threat around a circuit where he could overcome some of his Ferrari’s shortcomings. A revised engine aided his cause, but a fired-up Frentzen had a little more in reserve.

The Williams driver was two-tenths of a second up after the second sector but nearly threw it all away in the final part of the lap. He crossed the line with just 19 thousandths of a second in hand over the Ferrari. Schumacher began his final run with five seconds to spare but couldn’t recapture his former pace, and Frentzen duly took the first pole position of his career.

The Williams driver’s relief was palpable. His weekend had got off to an awkward start when he stumbled down the steps outside the medias centre, hurting his ankle. He compounded matters by crashing his car during Thursday practice.

Villeneuve therefore took third ahead of the impressive Fisichella. David Coulthard took fifth while his McLaren team mate Mika Hakkinen crashed and lined up eighth. The pair were separated by the second Jordan of Ralf Schumacher plus Johnny Herbert, who had surprised by topping Thursday practice in his Sauber.

Benetton’s difficult season continued. Jean Alesi was their best qualifier in ninth while a still-unwell Gerhard Berger was a poor 17th. The only Bridgestone-shod runner in the top ten was Barrichello, whose Stewart was pushed back to the car park at the conclusion of Saturday’s running.

Warm and dry conditions greeted the drivers for the pre-race warm-up but it wouldn’t stay that way. The rain began to fall during the build-up to the race, forcing hasty car set-up tweaks on the grid.

This was a concern for Williams, whose uncompromising FW19 chassis was highly pitch-sensitive and required major changes to be made suitable for wet conditions. Ferrari hurried a near rear wing assembly onto the grid for Schumacher’s car.

Neither team had won the race for more than a decade. Keke Rosberg scored Williams’ last Monaco win in 1983, two years after Ferrari’s most recent victory. With their cars occupying the top three positions it seemed certain one of those streaks would end.

Williams appeared to be favouring their 1983 tactics as they gambled on slick tyres to start the race on a wet track. They weren’t alone – Hakkinen did the same in his McLaren – but Ferrari and most others plumped for wets. Significantly, Schumacher preferred Goodyear’s 1996-specification tyres rather than the newer generation other drivers favoured.

Within seconds of the race starting it was clear Williams had got it disastrously wrong. Schumacher shot into the lead while the rest of the track picked its way past the flailing Frentzen and Villeneuve. By the end of lap one Schumacher already had a 6.6-second lead over Fisichella. After five laps his lead was 22.1 seconds. Barring a repeat of his 1996 slip-up, a Schumacher victory was already assured. 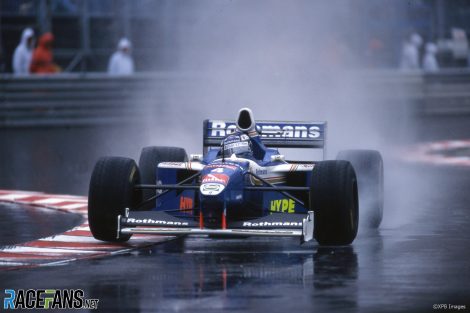 As lap two began the tentative Frentzen lost third to the other Jordan. Barrichello, Herbert and 1996 winner Olivier Panis followed him through on the next lap. By lap five Barrichello had split the Jordans and was closing on Fisichella, revelling in the wet weather grip of his Bridgestones. Barrichello took Fisichella for second at the chicane and the Jordans swapped places a few corners later with no repeat of their Argentina argy-bargy.

McLaren’s race was over on the first lap. Coulthard, running on intermediates, spun approaching the chicane and his slick-shod team mate hit the chicane trying to avoid him. The team’s weather forecaster, who had assured them the pre-race rainfall would only last half an hour, was later fired.

Arrows also began packing up after lap one. Damon Hill’s Arrows was eliminated when he hit Eddie Irvine’s Ferrari in the chaos behind them. Pedro Diniz had made it no further than Portier on lap one before spinning.

While the sure-footed Schumacher calmly extended his lead, more drivers were being caught out by the conditions behind him. Herbert crashed out of fifth place after nine laps and the younger Schumacher, who had been holding third, only lasted one lap longer. Fisichella was exercising more caution in the other Jordan but gradually slipping down the order.

The Williams drivers quickly abandoned their slick tyres: Villeneuve after three laps, Frentzen on the fifth tour. By lap 13 Schumacher was putting Villeneuve a lap down, and three laps later the championship leader retired from what had been a humiliating weekend.

As he explained afterwards Williams, like McLaren, had been operating from faulty intelligence. “We had data telling us it wasn’t going to be wet after half an hour,” he said. “It turned out it actually rained more so our dry set-up was completely useless.”

Mika Salo had worked his way into the top six points paying positions having started 14th. Alesi was applying pressure until he spun out and stopped. Berger also damaged his Benetton against a barrier but was at least able to keep going.

By mid-race the track was beginning to dry out. This was good news for Bridgestone runners Barrichello and Panis in second and third, as their rubber had held up well on drying tracks during testing. But fresh rainfall meant new wet tyres would be ready, and Schumacher called in the Ferrari pit for another set of Goodyears. By lap 40, at which point the leading trio had all pitted, his lead was almost a minute.

Frentzen’s misery came to an end when he hit the kerb too hard at the chicane which spat his Williams into a barrier. He’d already gone off at Mirabeau while being lapped by the driver he’d shared the front row of the grid with.

Irvine had stealthily moved his way up from 15th on the grid in his Ferrari and jumped ahead of Panis via his pit stop. By now just the top four drivers were on the lead lap.

Barrichello was on course for a remarkable second place for Stewart but ten laps from home all their dreams almost came true. Schumacher, 75 seconds to the good, went straight on at Sainte Devote. Fortunately for the race leader he kept his engine running and found enough space to execute a neat spin-turn and continue on his way.

Schumacher eased off over the final laps and took the chequered flag when the two-hour time limit was reached, seven laps shy of the scheduled distance. His first victory of 1997 catapulted him into the championship lead.

Behind Barrichello, Irvine put the second Ferrari on the podium ahead of Panis. Salo ran the entire race without pitting to change tyres – the last time any driver has done this – and by doing so collected a valuable fifth place for the struggling Tyrrell team. This turned out to be the final points finish for the once world championship-winning team.

The final point went to Fisichella while only four other drivers saw the chequered flag. Jan Magnussen struggled to seventh in his Stewart and Jos Verstappen spun his Tyrrell twice on his way to eighth. 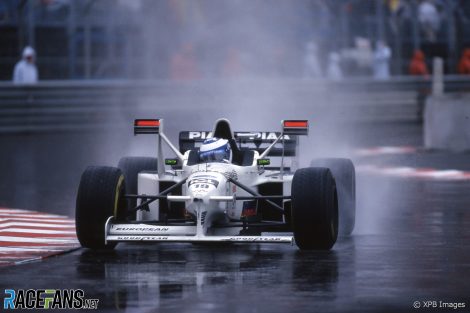 Ferrari’s joy at taking their first victory in Monaco for over a decade and a half was outstripped only by Stewart’s delight at their first points and podium finish. It was an outstanding result for F1’s unwanted team at its most famous race.

Stewart himself broke down in tears when asked about the emotion of his achievement after the race. Two years since he and the Ford bosses had hatched a plan to launch Stewart GP it had delivered its first major result.

Twenty years later the team is now Red Bull, the outfit which swept to a string of championship titles in the early 2010s. The team Stewart founded has become one of the most competitive and powerful forces in F1 – a far cry from those struggling early days in the Monaco car park.