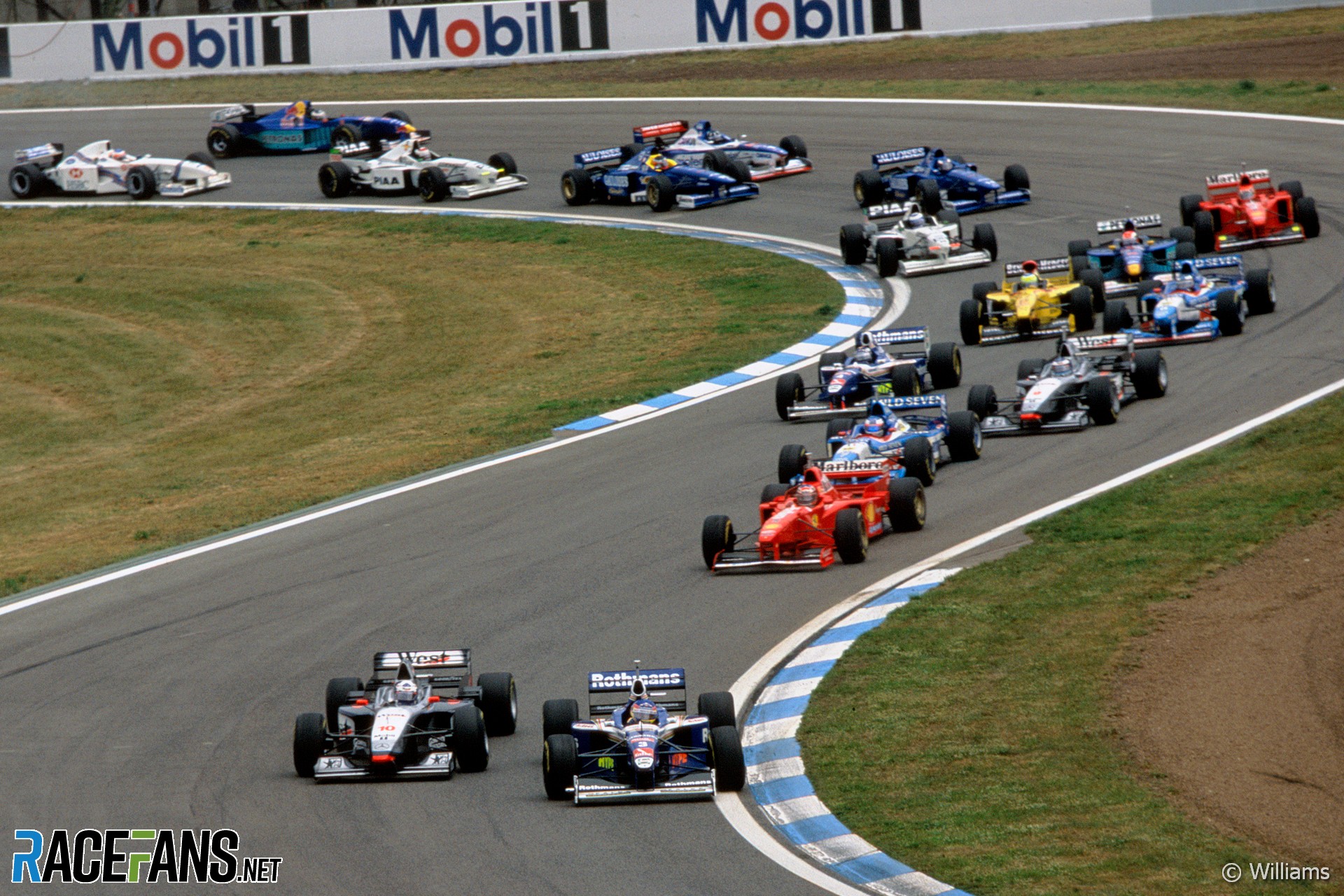 Williams arrived at the sixth round of the 1997 world championship following a humiliating race in Monaco. They left the Principality point-less after sending both their cars out on slick tyres in wet conditions.

The choice of tyre would be much more straightforward at the sunny Circuit de Catalunya. But as the mercury rose it became increasingly clear Williams’ tyre supplier Goodyear was feeling the heat from new rivals Bridgestone.

Michael Schumacher had inserted his Ferrari between the Williams cars in qualifying at Monaco. But in Spain the battle for the top two places was an all-Williams affair – the rest of the field was almost a second off the pace of the FW19s.

Heinz-Harald Frentzen was on course to repeat his Monaco pole position as the minutes ticked down. But a later flier from Jacques Villeneuve put the other Williams ahead, despite putting two wheels in the first at the final corner.

Frentzen tried to hit back but couldn’t match his team mate’s pace, and Villeneuve had his fifth pole position of the year. The softer tyres had helped cut over four seconds off the 1996 pole position time, but the pressing question was how well they’d stand up in the race.

Schumacher, whose Monaco win had put him on top of the points standings, had a tough time. Ferrari’s new Evo II engine still wasn’t reliable: they’d blown four examples in pre-season testing and another one went during practice. Schumacher was the best part of two seconds off with his final effort, which left him seventh.

He was separated from the Williams drivers first by David Coulthard. Mercedes had brought their new F110 engine which was good for 740bhp, and Coulthard prevailed in a close fight for ‘best of the rest’.

Jean Alesi narrowly bumped the second McLaren of Mika Hakkinen back to row three. Fourth on the grid was by far his best of the season so far, and a useful riposte to growing speculation over his future at the team.

With Gerhard Berger up in sixth it was looking like a much better weekend for Benetton. Technical chief Pat Symonds admitted the B197 was working much better at a track which stressed the tyres more than it had at lower-grip venues like Monaco.

The two Jordans lined up behind Schumacher, the world champion’s younger brother only slightly slower than his team mate. Johnny Herbert completed the top ten in his Sauber.

Herbert had a new team mate for this race. Ferrari test driver Nicola Larini had been ejected in favour of Gianni Morbidelli, but the team’s new driver had a fright during practice. He lost control of his car at the pit exit and skidded broadside across the track, in a manner reminiscent of Berger’s bizarre crash at Estoril four years earlier.

The second Ferrari of Eddie Irvine took 11th ahead of the first Bridgestone-shod runner. Olivier Panis knew his rubber would work much better over a race stint than it had during a single flying lap.

Reigning world champion Damon Hill had to settle for 15th on the grid after exceeding his maximum allocation of practice laps. He was penalised one lap from his qualifying allocation, meaning he was only allowed 11 laps instead of the usual 12.

If Williams’ tyre choice had been derided in Monaco, this time they were the ones smiling. “Before the race we laughed when we saw Ferrari on new tyres,” said Villeneuve. “There was just no way.”

Many of the Goodyear runners had struggled to get the same life from their tyres the Bridgestone teams had found. Ferrari’s lack of downforce meant they were giving their tyres more abuse than most, and the bold decision to use a fresh set of tyres for the race backfired.

The decision played into Villeneuve’s hands, however. He got away cleanly at the start while Frentzen slipped back and Schumacher rocketed away on his fresh rubber. Coulthard briefly tried to sit it out with Villeneuve at turn one but fell back into the clutches of Schumacher.

Lap two therefore began with Villeneuve in the happy position of having his closest rival in second place but already struggling on his tyres and holding the rest of the field up. Schumacher headed for the pits with blistered right-rear tyres after just 13 laps by which time Villeneuve’s lead was already over 20 seconds.

Coulthard had finally succeeded in passing Schumacher just before the pair of them pitted. He emerged well clear of the Ferrari. Villeneuve held on until lap 20 when he handed the lead to Alesi. The Benetton’s kindness to its tyres was now a major strength and Alesi also rejoined ahead of Schumacher after his stop.

But the Goodyear runners’ early stops had brought Panis into contention. Eleventh by the end of lap one, the Prost made it into the podium places before his first pit stop. After that he picked off Alesi and breezed past the three-stopping Coulthard to move back into the top three.

Another Bridgestone runner who showed great pace was Hill. He was running fifth, three places ahead of Panis, at one stage. But on lap 18 his Yamaha cried enough. “He was by far the quickest car on the track when the engine blew,” rued Arrows team boss Tom Walkinshaw. “A first three finish was going to be quite easy.”

While one Williams was eradicating the memories of Monaco, the other was reliving them. Frentzen’s FW19 was trashing its right-rear tyre so badly he was a minute behind after 38 laps. “It was looking good this morning,” he reflected afterwards. “But it was a real disaster for me this weekend.”

Villeneuve’s early lead had protected him from the rapid Panis. The dark blue Prost took around a second lap off Villeneuve in the final stint so that the pair crossed the line 5.8 seconds apart.

Alesi also went the distance with just two pit stops to take third place, a result he described as “oxygen” for his team. But the Benetton driver was unhappy at the amount of time he’d lost behind the lapped Irvine while coming under pressure for position from the other Ferrari.

“I was worried about Irvine because I know he’s such a very strange driver,” Alesi admitted afterwards. “To overtake him was quite tough, much more than keeping Michael behind.”

Panis also lost time behind Irvine, leading team owner Alain Prost to complain if Olivier or Shinji [Nakano] would have been in Irvine’s position I’m sure that we would have got a penalty much before that.”

Irvine, who was given a ten-second penalty for his driving, insisted it had been a misunderstanding. “Me and [Jos] Verstappen were trying to lap one of the Minardis so I assumed the blue flag was for that,” he said. “The team never told me [Panis] was a lap ahead.”

Schumacher was unable to capitalise on his team mate’s help, inadvertent or otherwise. He led the three-stoppers in fourth, followed by Coulthard.

Herbert slipped by Hakkinen on the final lap to take fifth. Frentzen came in a distance eighth, followed by Fisichella and Berger. The latter had been fortunate to start from his grid position after stalling at the initial start. The second start was abandoned when Ralf Schumacher stalled too, giving Berger a second chance.

Villeneuve’s win continued his binary campaign. He now had three wins and three no-scores, though it was enough to wrest the lead back from Schumacher.

But was his biggest challenge about to come from elsewhere? Second place for Panis was the best result yet for Bridgestone. Hirohide Hamashima reckoned his company now had Goodyear “very worried.”

“After all, we were supplying only lower ranked teams, and getting results so much better than expected. I was sure the top teams had all been asking hard questions.”

The prospect of a Bridgestone victory before the end of the season seemed increasingly strong. Panis looked like the driver most likely to deliver it. But a cruel twist of luck lay around the corner, and this race proved his final visit to the F1 podium.

Become an RaceFans Supporter today and browse the site ad-free. Sign up or find out more via the links below: