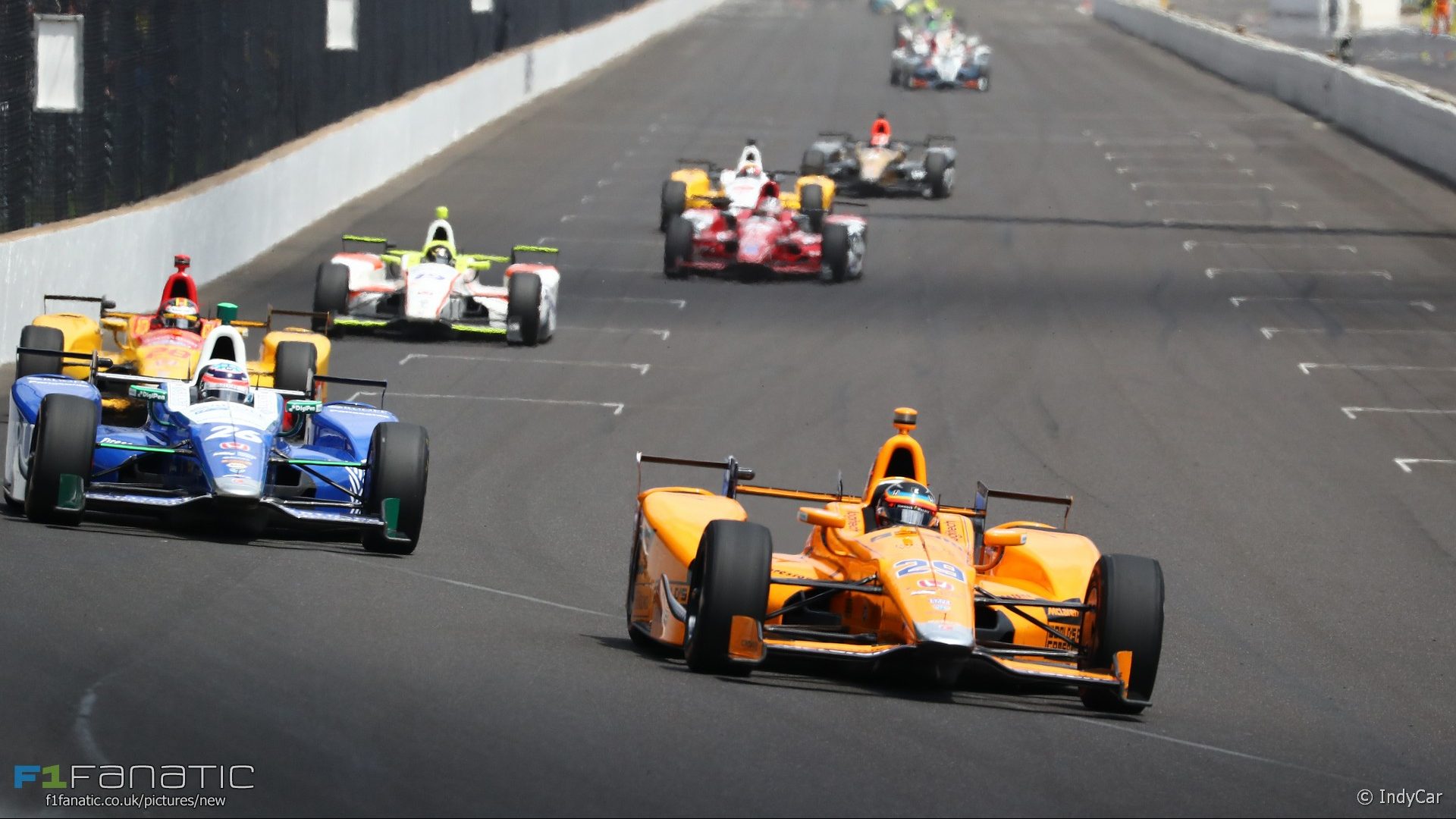 Takuma Sato won the 2017 Indianapolis 500 after several of the Honda-powered runners, including his team mate Fernando Alonso, dropped out with engine problems.

Takuma Sato won his first Indianapolis 500 after some stern defending in the final few laps from three-time winner Helio Castroneves, five years after throwing away the shot at a win on the final lap while battling Dario Franchitti.

The race ran relatively clean from the start until lap 53, when Jay Howard ran wide into the barriers, the impact breaking his steering. As his car slid back down the track it was for the following drivers to make snap decisions on which direction to go, and pole sitter Scott Dixon chose the inside.

He hit Howard’s car and launched, his car twisting in the air before landing heavily on a barrier on the inside of track, breaking in half and rolling over before eventually coming to a stop. The race was red-flagged while some catch-fencing was replaced that Dixon’s car had torn a hole in. Mercifully both Dixon and Howard were unscathed, though Dixon was later seen limping.

This incident and restart were the first two of eleven cautions throughout the race, with further yellows for a single-car crash by Buddy Lazier, and a five-car incident late-on that eliminated James Davison, Oriol Servia, Will Power, James Hinchcliffe and all but ended Josef Newgarden’s race. The remaining caution periods were for debris, as a number of winglets were strewn over the track during the race.

The Andretti team more or less dominated from the off with Ryan Hunter-Reay, Alexander Rossi, Fernando Alonso and Sato running in a 1-2-3-4 for a portion of the race, but one-by-one they fell leaving Sato to contend with Castroneves, Ed Jones and Max Chilton.

Hunter-Reay and Alonso – both of whom had led for a number of laps – suffered engine failures, while Rossi’s chances of a repeat victory all but vanished with a botched pit stop. Chilton found himself leading with some clever strategy work around the cautions, but couldn’t hold on and came home fourth after leading the most laps; but still an impressive return given he had earlier been a lap down.

That left Castroneves and Sato to battle out front, with the Andretti driver making the final lead change with five laps to go. Castroneves tried everything but it wasn’t to be; though second was a strong recovery given he had earlier driven underneath Dixon’s flying car, and been handed a penalty for jumping a restart.

Jenson Button should have checked out Max Defourny’s pass on Dan Ticktum for an example of how to make an overtaking move work at Portier (at 26:00 in the race two video). Defourny distinguished himself with two excellent passes during the weekend’s Eurocup support events: he also nicked the final podium spot off Robert Shwartzman at Massenet in race one.

The massive 30-car field had to be trimmed to 28 in order to fit on the Monaco grid. Will Palmer took victory in race one from pole position, becoming the second member of the Palmer family after brother Jolyon to stand on the top step in the principality. He finished ahead of Sacha Fenestraz and Defourny, while Dan Ticktum was top rookie in fifth.

Fenestraz – who won last year’s single, rain-shortened Eurocup race in Monaco – repeated his victory in race two from pole position ahead of Shwartzman. Palmer capped a good weekend with the final podium spot and Ticktum was top rookie again.

Despite a late onslaught from Ishiura, race two went to Sekiguchi. Ishiura led from pole ahead of Kenta Yamashita and Lotterer but nearly half of the grid made their mandatory pit stops at the end of the first lap. Ishiura and Yamashita stayed out but Sekiguchi and Lotterer benefited by pitting, the former moving to the head of the field. He resisted Ishiura to win by less than half a second. Lotterer was third and of Rosenqvist, Kamui Kobayashi and Yamashita.

Race two video not available yet.

Ameya Vaidyanathan took his first win in the championship in race one after overtaking polesitter Harrison Scott for the lead early on. Scott finished second ahead of Devlin DeFrancesco, who made his first appearance on a EuroFormula Open rostrum.

Scott took the victory in race two from sixth on the grid with a commanding performance to take a 39-point lead in the championship over Vaidyanathan. Behind, DeFrancesco went one better than race one with a second, while Thiago Vivacqua finished in third. Polesitter Nikita Troitskiy had a tough start, falling to fourth place by the end of the Kemmel Straight and eventually finished in sixth position.

Austin Dillon won the Coca-Cola 600, coasting to the end on fumes to take the number 3 back to victory lane for the first time since Dale Earnhardt in 2000. The car is owned by Dillon’s grandfather Richard Childress, who retired the number initially following Earnhardt’s death in the 2001 Daytona 500, but returned it the car for his own grandson.

Dillon only led the final two laps after passing Jimmie Johnson late on – who had run out of fuel. The pair of them were among eight drivers who had stayed out when a number of cars – included the strongest race runners to that point – pitted for the final time with 32 laps to run. Kyle Busch and Martin Truex Jnr were two of those and rapidly closing on the lead at the end, but Dillon has just enough to hold on.

Petter Solberg won his first World Rallycross round of the year as Lydden Hill hosted it’s final race in the series, with the British round set to move to Silverstone next season.

Solberg took the win ahead of Johan Kristoffersson who vaults into the championship lead past Mattias Ekstrom who could only manage fourth, while Andreas Bakkerud completed the podium. Rallycross turned British Touring Car driver Andrew Jordan was also in action and made the semi-finals, but a poor start saw him just miss out on a place in the final six, finishing eighth overall.

The World Touring Cars made their annual trip to the Nordschliefe for two three-lap races, in a round that saw the championship leader endure a torrid day.

Thed Bjork won the opening race but the main story – as in past years and practice – was punctures; most notably the one that hit former championship leader Tiago Monteiro on the final lap, putting him out of the points and limping to the line.

This also caused repercussions in race two as he was unable to join the grid in time – he should have started fourth – and was instead forced to start from the pit lane, where he was unable to make much progress and finished without points once more. This left Nicky Catsburg to take the win after jumping pole sitter Norbert Michelisz at the start, and with it the championship lead.

On the face of it, the Nurburgring 24 Hour race was a relatively straightforward affair: the 29 Audi Sport Team Land car led the majority of the race and won by a clear 30-second margin. However, this was far from a straightforward race, and for the second time in as many years, the result was only decided on the final lap of the legendary circuit.

In qualifying the shock was that the GT3/SP9 runners were all beaten by the Scuderia Cameron Glickenhaus SPX class car which took pole position with an excellent lap. However their challenge gradually faded in the race and the 29 Audi emerged as the clear leader with just over an hour to go. But disaster stuck as they had to stop for a system reset, dropping them to third position.

Rene Rast’s Audi Sport Team WRT number nine car then took the lead with the 98 ROWE BMW with Nicky Catsburg in second, and the order looked set. But a steadily increasing rain showed created drama. When the delayed 29 Audi with Kelvin van der Linde suffered more issues with a loose fuel filler cap, the team quickly removed the new slicks they had fitted and opted for wets. Next time around most of the Nordschleife was sodden and the two leading cars were forced to pit after losing huge amounts of time, letting the 29 Land Audi car back into the lead on the final lap despite their numerous troubles.

The final podium palces were set when Catsburg overtook Rast for second in the treacherous conditions. The number 42 Schnitzer BMW was a distance fourth while defending champions Mercedes AMG Team Black Falcon finished 7 minutes down. Both Glickenhaus cars suffered issues, with the 702 car in 20th and the pole-sitting 704 an unclassified 71st after an accident, while the other fan favourite Opel Manta Foxtail failed to finish after numerous troubles.

The Jerez circuit proved an overtaking-free zone as usual for the Formula V8 cars. Roy Nissany led the procession in race one while Pietro Fittipaldi moved up to second after pole sitter Egor Orudzhev retired.

Orudzhev beat Fittipaldi to turn one in race two but the Lotus driver muscled back ahead at turn three to reclaim his lead. Most of the drivers made their mandatory pit stops shortly after the window opened leading to no changes among the top positions. That left Fittipaldi to take a win which leaves him a point behind team mate Rene Binder at the top of the standings.

Video not available yet.

Sebastian Vettel won the Monaco Grand Prix after a strategic ‘overcut’ helped him to pass Kimi Raikkonen in the pits. A similar strategy jumped Daniel Ricciardo to third past Valtteri Bottas and Max Verstappen, while Lewis Hamilton finished seventh after his poor qualifying performance.

For the third time in three race Charles Leclerc took pole position in F2, but a botched pit stop caused damage to his front right wheel and forced him out of his home race. Oliver Rowland picked up the win and moved within three points of Leclerc at the top of the standings. Last year’s winner Artem Markelov came second ahead of Honda junior Nobuharu Matsushita. McLaren junior Nyck de Vries won Saturday’s sprint race sprint race from second on the grid after jumping team mate Johnny Cecotto at the start. The latter came home second ahead of Gustav Malja while Leclerc retired again.