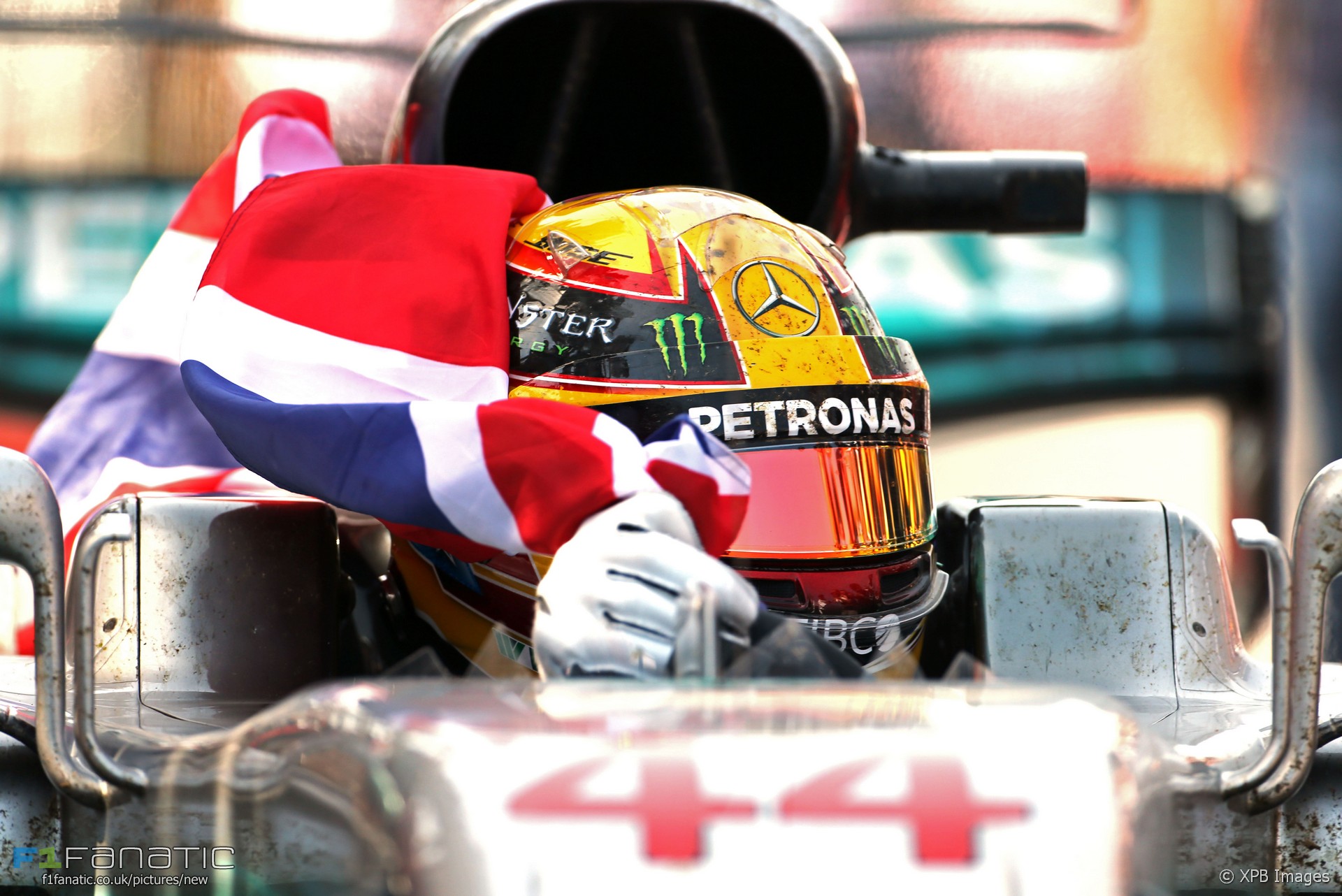 The Canadian Grand Prix wasn’t quite what it was supposed to be.

With Lewis Hamilton and Sebastian Vettel occupying the front row of the grid for the fourth time this year, this was supposed to be another showdown between the two championship favourites. It wasn’t.

With tyres degrading slowly and one pit stop likely for most drivers this was supposed to be another ‘boring’ race. It wasn’t.

But with Montreal master Hamilton starting from pole position this was supposed to be his chance to reclaim lost ground in the championship to Vettel. It was.

Vettel’s weekend began to go wrong from the moment Max Verstappen rocketed away from fifth on the grid. Neither of the Ferraris got away well, and Vettel found himself hemmed in with Valtteri Bottas on his inside and Verstappen sweeping around his outside.

There wasn’t enough room for the right-hand part of Vettel’s front wing, which sustained a compromising blow. Then came an unlucky twist which doubled the damage for the Ferrari driver.

Carlos Sainz Jnr tangled with Romain Grosjean approaching turn three. The Toro Rosso driver lost control and smashed into the luckless Felipe Massa, eliminating both. The Safety Car was deployed and the field slowed before the leading drivers had reached the quickest part of the track.

Vettel’s front wing had therefore not experienced anything close to a maximum load since the contact, and the full extent of the damage could not be appreciated. The Canadian marshals cleared the mess up very quickly, and by the end of lap three the race was on again. When Vettel reached top speed for the first time at the restart the damaged section of his wing collapsed.

Had the team realised they needed to change it during the Safety Car period much less time would have been lost, but now it was too late. “Maybe we can delay that,” suggested Vettel. “There is a risk to damage the car and it is too dangerous,” he was told. “Box now.” He dropped to 18th and last.

Verstappen had inadvertently compromised one of the title contenders’ races, could he now take the fight to the other one? A superb restart brought him onto Hamilton’s tail, but the Renault’s lack of straight-line speed wasn’t up to the task of getting by.

A few laps later the Renault’s lack of reliability prevented him from going any further. Verstappen thumped the steering wheel in frustration as his car lost all drive coming out of the Senna hairpin. The path was now clear for Mercedes to claim their first one-two of the season.

Daniel Ricciardo now assumed third place and Red Bull were minded to “bank track position”, in Christian Horner’s words. Vettel was compromised, Kimi Raikkonen had dropped himself between the Force Indias with an unforced error at turn seven, and they had a chance to beat the Ferraris by getting his pit stop out of the way.

The soft tyres had looked almost as quick as the super-softs in practice, but more durable, so on lap 19 Ricciardo switched to a set of them. Bottas covered him off by following suit five laps later.

But race leader Hamilton hung on until lap 32, then switched to the super-softs for his final stint. “Because I was quite comfortable on the ultra-soft they kept me out way longer than my stop, which was to be lap 21,” he explained.

“In that period of time everyone had stopped behind me and I was able to wait a bit to see how everyone was doing on the different tyres and after they had seen one of the drivers on the super-soft and it was going well – Vettel, maybe – they said this is the better tyre go with.”

The Force Indias were running fifth and seventh after the restart with Raikkonen between the pair of them. Ricciardo ahead was a potential target and by splitting the strategies for their drivers they could cover off both options.

But they missed the chance to undercut Ricciardo with Sergio Perez. He came in one lap later and switched to the super-soft tyres, but the additional grip wasn’t sufficient for him to get a run at the Red Bull.

Meanwhile Esteban Ocon stayed out on his original set of tyres until lap 32. He also took a set of super-soft and had the benefit of 13-lap younger tyres when he rejoined the track behind Perez. Force India now faced the difficult question of whether to order Perez to move aside for his potentially faster team mate.

The team tried a diplomatic approach, telling Perez he would be given his place back by Ocon if the younger driver was unable to pass Ricciardo. But Perez wasn’t having any of it. Afterwards the team adopted the stance that they had decided to let its drivers race. But the radio discussions left the clear impression the decision had been Perez’s.

The outcome was predictable: The Ferraris cruised up behind the Force Indias and Vettel overtook them. Raikkonen would probably have done the same but his brake-by-wire system failed shortly before he got within range. This at least spared Ferrari the same conversations Force India were having.

Vettel’s pass on Ocon was a gem of a late-breaking move at turn one, achieve despite Ocon having the benefit of DRS from his team mate ahead. The Ferrari driver had enjoyed a fairly straightforward recovery run up to that point but the last two places he gained were the benefit of gritty moves: a late dive at the final chicane claimed fourth from Perez.

Lance strolls into the points

Lance Stroll arrived at his home race after six largely forgettable weekends. The trend continued in qualifying where he dropped out in Q1.

The race was a welcome change for the better. Avoiding the trouble at the start, Stroll ascended to ninth as several drivers ahead of him made early pit stops. He resumed from his visit to the pits at the back of the field, but easily picked off the Saubers with their year-old engines and, later, the even slower McLarens.

Stroll also came up on Romain Grosjean and Jolyon Palmer, the latter having pitted at the end of lap one and run the remaining 69 laps on a single set of super-softs. Stroll dodged past both to take ninth and his first career points.

Ahead of him was Nico Hulkenberg, who saved time by pitting under the Virtual Safety Car period when Verstappen’s car stopped. The Renault driver just ran out of time to catch the ailing Raikkonen before the chequered flag. Grosjean’s long stint was rewarded with the final point.

Toro Rosso’s miserable day was capped when Daniil Kvyat retired. He had already picked up a penalty after getting away from the grid slowly due to a clutch problem and then failing to get his place back in time.

“The regulation allows the driver to catch-up until the first Safety Car line,” explained team boss Franz Tost. “But as all the drivers use the complete width of the track to warm-up their tyres, it was difficult for Daniil to overtake them in order to get back to his position without taking any risks.”

“Therefore, he just missed overtaking Alonso before the Safety Car line. It was also too late for him to go into the pit-lane so he got penalised for this.”

The stewards then dropped the ball: Kvyat was given a ten-second stop-go penalty but a drive-through penalty was announced instead. He served that, but was then told to serve the additional ten-second stoppage at his next pit stop. His total penalty was therefore no worse than it might have been. But it became academic when his car failed during the pit stop.

Hamilton’s car “back to where it should be”

The Canadian Grand Prix was a massive shot in the arm for Hamilton’s championship chances. He halved his points deficit to Vettel. It also bodes well for his chances in the coming two races, also at ‘power circuits’.

And perhaps most importantly it showed Mercedes can master the softest tyre compounds with their fickle W08. Hamilton said his car “is back to where it should be”.

“We didn’t bring any upgrades here,” Hamilton explained. “I was praising [the team] on the due diligence they did after the last race.”

“They really did such great work in terms of analysing where we’d gone wrong, all the different points, and then giving us a summary: ‘this is where we went wrong, this is what we think we need to do to fix it.’ And then putting it into action. It was just amazing teamwork. We came here, the
car’s back to where it should be.

“It doesn’t mean it’s going to be like that every time,” he cautioned, “but I think we learned a lot.”

McLaren and Honda heading for divorce

Whether in Formula One or IndyCar, late-race retirements have been a distinctive feature of Fernando Alonso’s 2017 season. But on a weekend where he made it clear he will move elsewhere for 2018 if McLaren can’t give him a race-winning car, his latest ‘DNF’ took on added significance.

McLaren kept ahead of their rivals through their speed in the corners and well-executed strategies. Any rival which caught them on the straight passed with cruel ease. Nonetheless Alonso was runnign in tenth place with four laps to go. And then the inevitable happened.

“After so much toil and heartache, even that single point would have felt like a victory,” reflected racing director Eric Boullier. “And then came yet another gut-wrenching failure.”

“It’s difficult to find the right words to express our disappointment, our frustration and, yes, our sadness. So I’ll say only this: it’s simply, and absolutely, not good enough.”