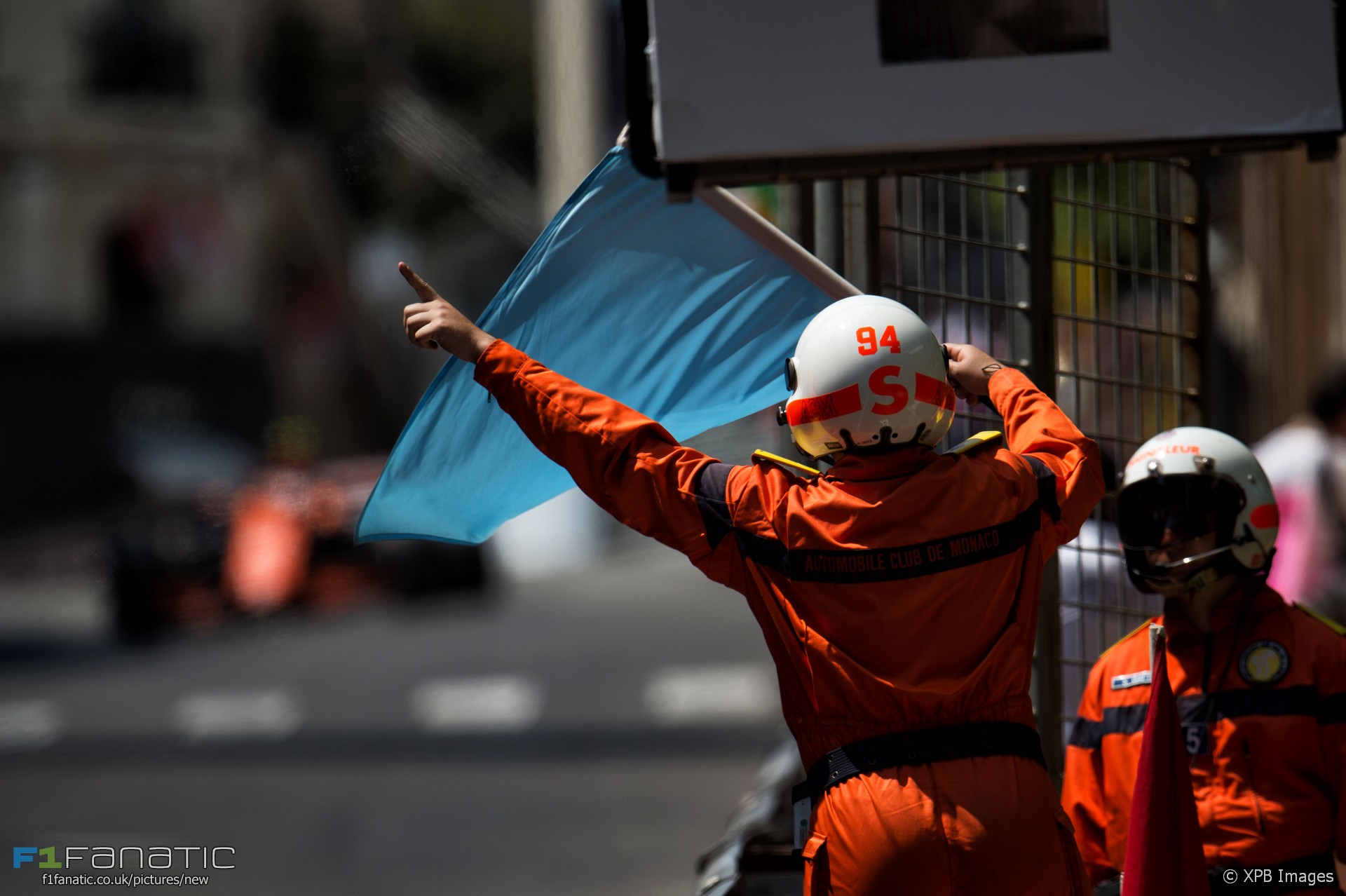 Formula One drivers yelling about “blue flags” on the radio has become a familiar feature of races. But are they getting too little help making their way through traffic – or not enough?

Kimi Raikkonen complained about the blue flag procedure in the Canadian Grand Prix drivers’ briefing. He was unhappy about the circumstances in which he’d lost the Monaco Grand Prix after catching some lapped cars after his pit stop.

Do the blue flag rules need revising, or should they be left as they are?

More help for the leaders

Most weekends we hear drivers complaining the slower cars won’t move aside quickly enough. In Russia a potentially exciting finish was spoiled when Felipe Massa got between race leaders Valtteri Bottas and Sebastian Vettel.

The rules should be changed to make it harder for the leaders to get through traffic.

Less help for the leaders

Formula One’s blue flag rules are too generous as they are.

Lapping traffic used to be a vital part of a racing driver’s skill. But the rules are now so strict the leaders just cruise up behind slower cars and complain on the radio until they move aside.

The rules should be changed to make it harder for the leaders to get through traffic.

I’ve often said F1’s rules are too complicated and need to be simplified. The counter-argument to this is that the rules have evolved the way they have over many years and it’s easy to forget why they’ve turned into what they’ve become.

IndyCar has much stricter rules on blue flags which make it harder for the leader to get through traffic. The second race in Detroit earlier this month was enlivened in the closing stages when leader Graham Rahal spent lap after lap trying to get around Ryan Hunter-Reay while he was being chased down by Josef Newgarden. It would be nice to think backmarkers could work in a similar way in F1, naturally delaying the progress of the race leader to keep the battle at the front close.

However if F1 were to relax its rules on how quickly backmarkers had to let traffic by it would place a huge amount of power in their hands. The temptation to abuse it would be huge. One notorious example from 20 years ago illustrates this: Sauber driver Norberto Fontana delayed Jacques Villeneuve during the 1997 championship decider after Ferrari’s Jean Todt had instructed his team, who were using their engines, to help them.

Of course drivers complain about the blue flag rules all the time. Backmarkers hate seeing their tyre temperatures drop when they slow to let the leaders by. Leaders hate losing even the smallest amount of time in traffic. And for the latter traffic can be a convenient scapegoat.

Do F1’s blue flag rules need changing? If so, how?

Cast your vote below and have your say in the comments.

How would you change F1's blue flag rules?