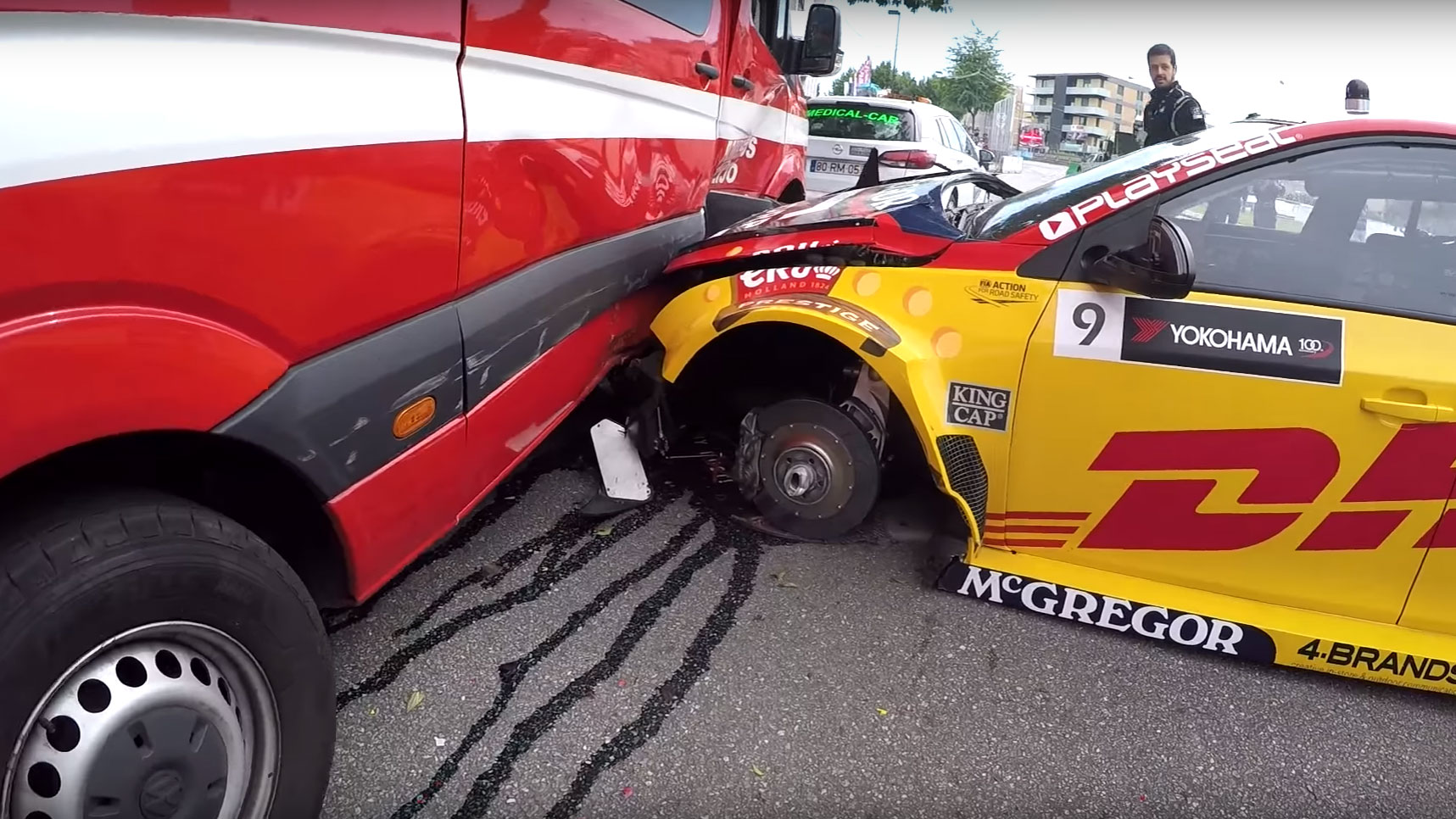 The World Touring Car Championship took the controversial decision to introduce rallycross-style ‘joker laps’ for its event in Portugal. But a crash in qualifying which saw a driver strike a fire response vehicle which was parked in a run-off area prompted questions over safety.

The WTCC introduced a joker lap into the series this weekend, akin to the kind found in World Rallycross, with the above left video from Tom Coronel explaining the idea. Unfortunately for Coronel he never got to try it out in race conditions, after a strange and scary crash in practice (above right) ruled him out of the weekend.

Mehdi Bennani won the opening race after jumping from fourth to second at the start and slicing past Honda’s Ryo Michigami shortly after to driver to an uncontested win. Tiago Monteiro used the new joker to great effect to finish second from seventh on the grid, with Thed Bjork completing the podium.

The second race was a more straightforward affair, with Norbert Michelisz winning from pole position, though fellow front row starter Rob Huff was lucky not to be collected on the line as he struggled to get away. Thed Bjork and Tiago Monteiro completed the podium in the reverse order to race one, while Huff used the joker to recover to fifth.

Scott Dixon arrived at Road America leading the championship but lacking a win in 2017. He put that right with a classy drive to his first victory of the year, fighting off a late challenge from Josef Newgarden as he single-handedly saw off a quartet of Penske cars which had dominated qualifying.

Dixon became the eighth different winner from ten races in 2017, while Helio Castroneves completed the podium having started the race from his 50th career pole position.

Kevin Harvick notched up his first victory of 2017 as NASCAR made one of its rare visits to a road circuit. The race ended under caution following a late crash for Kasey Kahne.

It was a weekend of contrasting fortunes for the Lotus drivers as Pietro Fittipaldi moved backed ahead of team mate Rene Binder on top of the standings. Fittipladi threw away his advantage from pole position yet again on Saturday and was out before the first lap was over. That left Egor Orudzhev, a pre-season favourite for the title, to finally take his first victory of the year.

But on Sunday – Fittipaldi’s birthday – he stylishly converted pole to victory despite late pressure from Alfonso Celis Jnr. This time it was Binder whose races was over within a lap after contract with Yu Kanumaru. That left the top six in the championship separated by just 24 points.

Videos not available yet.

Daniel Ricciardo took his first victory of the season in a crazy Azerbaijan Grand Prix, having run as low as seventeenth at one stage. Valtteri Bottas – who had been further back still and a lap down early on – was second, just pipping Lance Stroll on the line, though the Williams driver still secured his maiden podium in third. Sebastian Vettel and Lewis Hamilton finished fourth and fifth with both drivers delayed; Vettel with a ten second stop/go penalty for swiping at Hamilton, while the Mercedes racer was forced to pit for a loose headrest.

Johann Zarco took his maiden podium in MotoGP at Assen, but endured a miserable race as Valentino Rossi took his first win of the season. Danilo Petrucci ran him hard in the closing laps but had to settle for second with Marc Marquez completing the podium, while fifth for Andrea Dovizioso was enough to put him into the championship lead after Maverick Vinales crashed out.