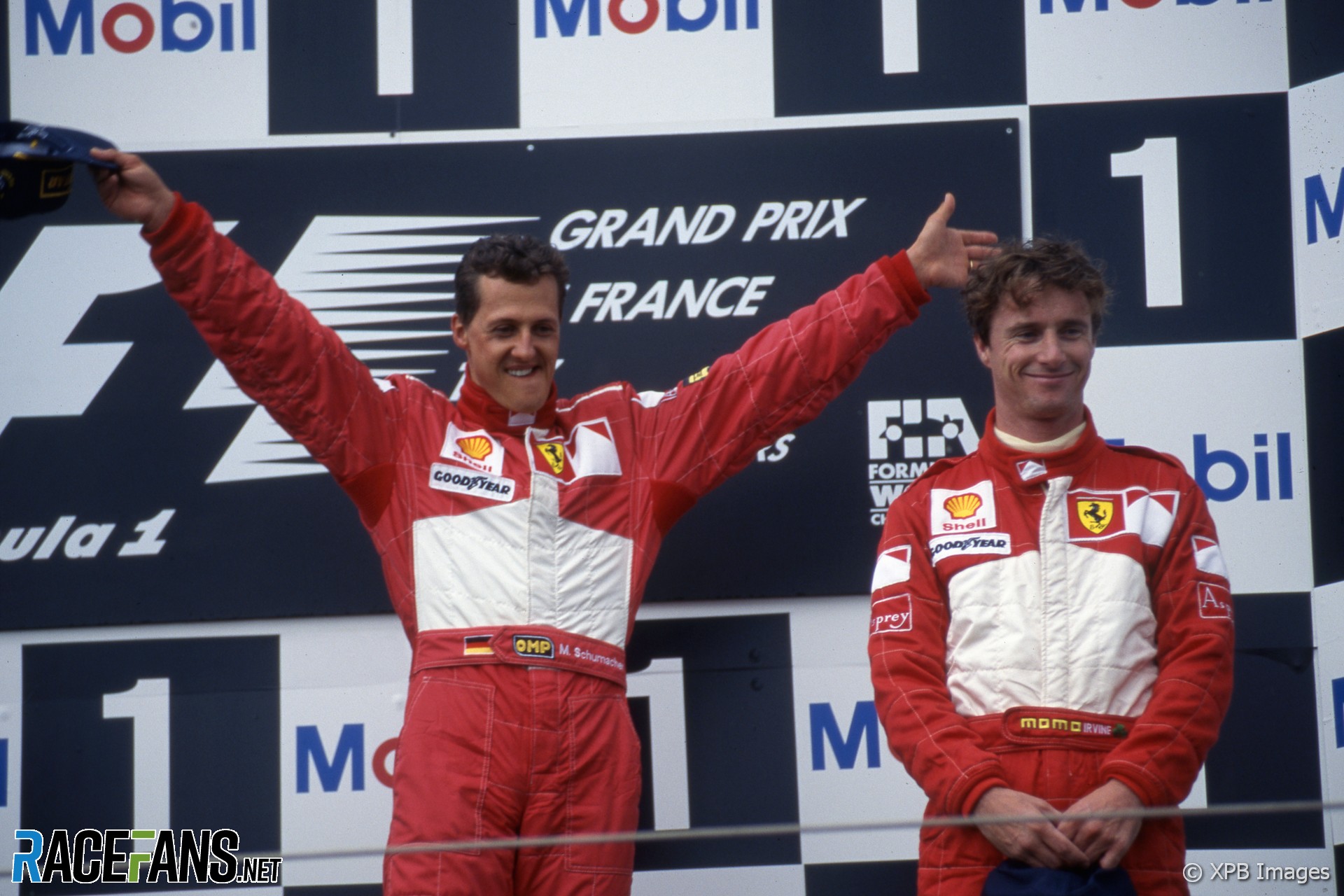 Twenty years ago today, in the middle of one of the most frantic final laps a Formula One race has ever seen, a cool-headed Michael Schumacher found the time to help out his little brother.

He did it while winning the race for himself, inflicting another surprising defeat on Williams and Jacques Villeneuve.

Two weeks on from his humiliating defeat at home, Villeneuve arrived in France trailing Schumacher in the championship. But the home race for engine builder Renault, who had won the last two races on the French track, promised to be a strong venue for Williams.

His weekend got off to a troubled start, however. Villeneuve crashed ahead of qualifying, meaning he had to begin the session in his spare car. He eventually switched to his regular race chassis but was held up by Mika Hakkinen spun at the Lycee chicane.

While Villeneuve struggled to fourth on the grid, the top three places were taken by German drivers. They were led by Schumacher, who said his second pole position in a row was a “surprise” and suggested Ferrari’s new, untested front wing may have played a role.

“All the testing we did here was done under the same circumstances as now and I was so far off the pace that I was struggling to do a 1m 15.6s. Now I have done a 1m 14.6s – a whole second
faster – and I have no explanation for it.”

Heinz-Harald Frentzen in the other Williams almost pipped his former Mercedes team mate to pole. On his final flying run Frentzen was ahead after the first sector, but errors at the Nurburgring and Chateau d’Eau corners left him second.

He was only six-thousandths of a second faster than Ralf Schumacher, who impressed with an excellent run to third in his Jordan.

For once Eddie Irvine was close to Schumacher’s pace. Just three-tenths of a second separated the two Ferraris, and Irvine took his place on the third row of the grid.

Alongside him was a driver who’d been handed a big opportunity. Alain Prost’s team had been hit hard by the loss of Olivier Panis due to injury ahead of their home race. But the four-times world champion brushed off suggestions he might drive his own car at their home race.

Instead the inexperienced Jarno Trulli was hired from Minardi and he rose to the occasion. Despite a slight error at Lycee on his final lap Trulli took sixth on the grid for his seventh Formula 1 start.

Alexander Wurz continued to deputise for Gerhard Berger at Benetton and he raised eyebrows by out-qualifying team mate Jean Alesi. The McLarens of David Coulthard and Mika Hakkinen shared the fifth row.

Another change in the driver line-up came at Sauber. Gianni Morbidelli, who had taken over from Nicola Larini two races earlier, had broken an arm in a testing crash. German Formula Three champion Norberto Fontana was therefore promoted to the race squad. This was a big step up, and he qualified a second and a half off team mate Johnny Herbert.

As well as planting his Ferrari on pole position, Schumacher had managed to save a fresh set of tyres for the race as well. But it seemed he might not need them when rain fell on the morning warm-up session. The two Ferraris headed the times on the wet track.

The threat of rain hung over the race but by the start time the track was dry. On the very short run to the first corner Schumacher easily kept his lead from Frentzen, while the fast-starting Irvine took third ahead of Villeneuve.

Schumacher forced a rapid pace and was already four seconds clear of Frentzen after five laps. The gap opened up more steadily after then, but Williams’ hopes Schumacher was fuelled light and running a three-stop strategy were dashed as he continued to stay out.

He finally appeared in the pits on lap 22 – just one lap before Frentzen. Irvine came in at the same time as the Williams driver, while Villeneuve stayed out two laps longer. After the quartet had refuelled the race order remained unchanged.

Villeneuve rejoined the track just ahead of Trulli. Were Prost planning to try another one-stopper on Bridgestone’s durable rubber? That seemed to be the plan as he hung on until lap 30 of 72 before pitting. But the threat of rain from the gradually darkening skies was beginning to grow.

The Jordan pair, led by the younger Schumacher, took up fifth and sixth after Trulli came in. They were followed by the sole remaining McLaren of Coulthard, a blown Mercedes having accounted for Hakkinen, and the two Benettons ahead of Trulli.

The early laps saw the likes of Tarso Marques, Trulli’s replacement at Minardi, drop out with an engine fire. Shinji Nakano in the other Prost was out by lap seven having spun. Jos Verstappen also crashed out before the leaders began their pit stops.

Schumacher continued to force a pace Frentzen couldn’t live with through their second stint. As his final planned pit stop approached the gap was up to 20 seconds. But now the skies were leaden and rain was clearly imminent.

Even so when Schumacher appeared in the pits on lap 46 Ferrari had little option other than to fit him with more slicks. The rain hadn’t arrived yet, and one by one the rest of the two-stoppers came in and went out on slick tyres.

There was a dozen laps remaining when the serious rainfall began. Sensing an opportunity for a big points pay-off, Coulthard and Ralf Schumacher pitted from fifth and sixth for intermediate tyres.

The rain intensified, and on lap 62 Schumacher skidded off at the exit of Estoril. The Ferrari bounced through the run-off and rejoined the track, his lead cut from 36 seconds to 31. But he’d been lapping several seconds quicker than either of the Williams drivers prior to that.

Coulthard was going quicker still and now Williams belatedly considered following his lead. With just five laps to go Villeneuve, who had set his car up more in anticipation of wet conditions than his team mate, came in for his own set of intermediate tyres.

He rejoined the track in sixth place and was quickly up to speed. But the track was already beginning to dry. The most advantageous time to put on intermediates had been missed. As in Monaco, Williams had made a crucial strategic error.

The final moments of the race were pure drama. The penultimate lap began with four cars battling over fourth place separated by three seconds: Coulthard ahead of Villeneuve, who’d just passed Ralf Schumacher, pursued by Alesi. Villeneuve picked off Coulthard, whose tyres were now beginning to fade, and the younger Schumacher did likewise.

However the Jordan skidded off the track at 180, seemingly ending his chance of points. That changed when his race-leading brother had a brainwave. Moments after lapping the Jordan, and with the chequered flag in sight, Michael waved Ralf back onto the lead lap.

This would prove crucial. Alesi mounted a last-lap attack on Coulthard which left the McLaren in a gravel trap. He would have been classified sixth had Schumacher not put his brother back on the lead lap. The Jordan driver motored past to collect the final point.

Coulthard was not impressed with either of his rivals.

“Ralf took a silly dive down my inside at the hairpin,” complained Coulthard afterwards. “He could have taken us both out, I gave him the room because I want to finish, and then he spins in front of me.”

“And then I have Alesi once again he rammed the back of me. We’ve seen so many times from Jean, he’s not a new driver, I just don’t think it’s acceptable.

There was yet more drama as the flying Villeneuve arrived on Irvine’s tail at the final corner. The Ferrari driver had also put intermediates on but blistered his rears and straight-lined one of the chicanes.

Irvine covered the inside line for the last corner and the Williams pirouetted into the pit lane. Villeneuve floored the throttle and rejoined the track just in time to beat Alesi to fourth.

Trulli finished his first race for Prost in tenth place having made a second pit stop late in the race. The only driver behind him in the classification was Damon Hill, whose race was ruined at the start when contact removed his front wing.

Schumacher and Ferrari had begun the season doubting they had the car to be championship contenders. But after his third win in four races at mid-season he had to admit he underestimated how competitive they would be.

“Obviously my predictions about the weekend were totally wrong.=,” said Schumacher. “But I am happy to take it as it is: to get pole position and then the victory is the best you can do.”

“The way we did it was perfect, too, because we made no mistakes in either the setup or the strategy.”

The same clearly couldn’t be said for his main championship rival, over whom Schumacher how held a 14-point lead. Villeneuve’s season was unravelling. His only consolation from another sub-par weekend was that the stewards’ investigation into his last-lap antics resulted in no action begin taken.

To the ten points for his win Schumacher also deserved some measure of the credit for his brother’s point for sixth place. The cool judgement he showed on the final lap of a tense race contrasted sharply with his main rival’s struggles. This was one of Schumacher’s less-heralded great drives.

Become a RaceFans Supporter today and browse the site ad-free. Sign up or find out more via te links below: