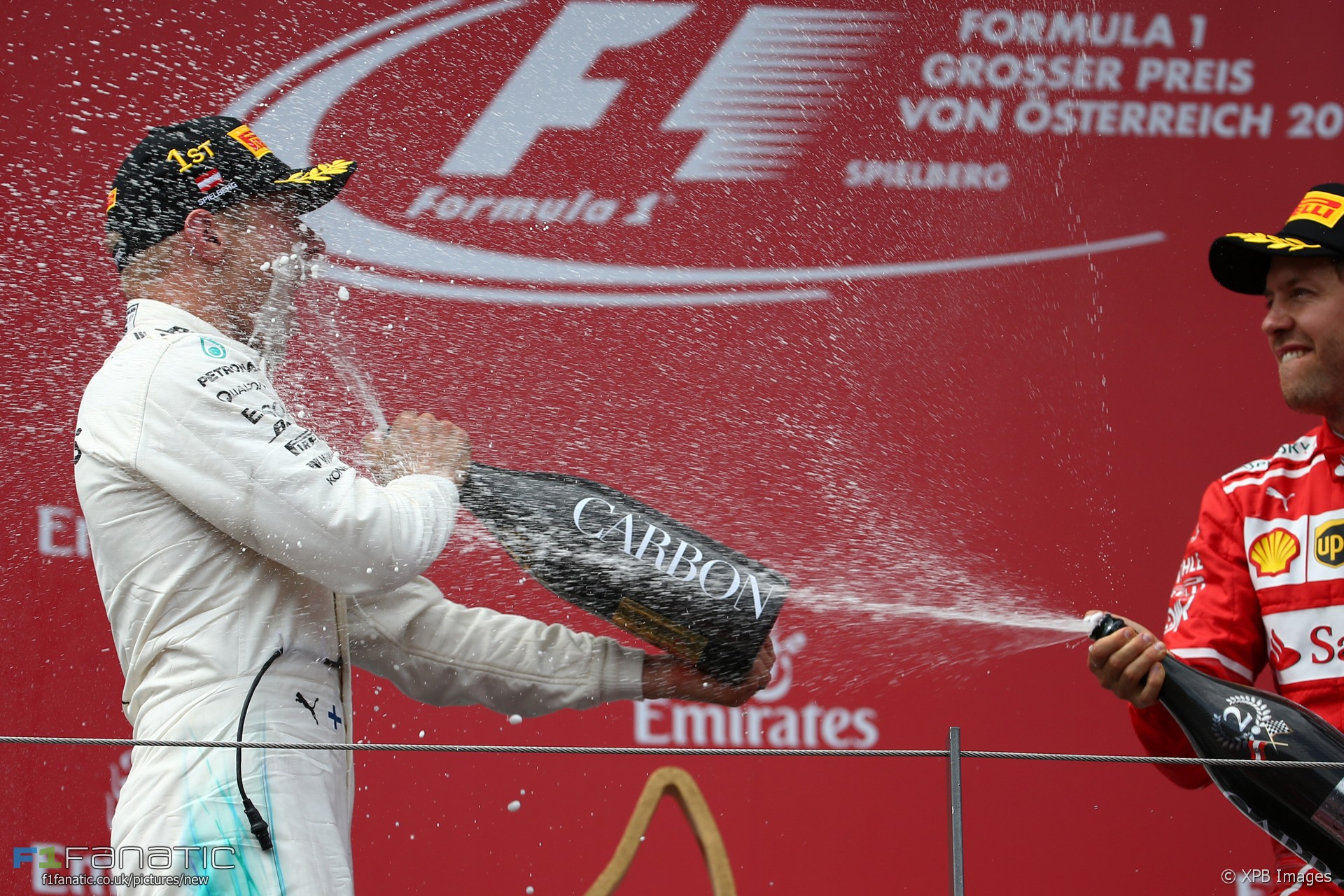 He may well have started the Austrian Grand Prix six-tenths of a second sooner than his rival as well. After the race Vettel was still in disbelief that the pole sitter had got away so quickly.

But more importantly for the Ferrari driver was that he kept the other Mercedes behind, and extended his championship lead again.

Too good to be true?

It wasn’t hard to see why Vettel felt his fellow front row occupant’s getaway was too good to be true. The lead Mercedes seemed to pull away at the very instant the red lights went out, as if Bottas had no reaction time at all.

Vettel admitted the distraction of seeing Bottas get away so well affected his own start. Daniel Ricciardo, who started directly behind Vettel, also got on his radio to suggest Bottas had got away a bit too well.

The stewards soon had more to deliberate than a possible jump start. Daniil Kvyat arrived at turn one too quickly, locked his brakes and punted Fernando Alonso’s McLaren into Max Verstappen’s slow-starting Red Bull. As often happens in these situations reverse poetic justice applied, so the two innocent parties ended their races while Kvyat carried on, albeit with a drive-through penalty and more points on his licence.

Behind Bottas and Vettel, Ricciardo took up third place having outfoxed Kimi Raikkonen at the start. Romain Grosjean had also taken advantage of the Ferrari driver, whose seat he openly covets, and no doubt took some pleasure in holding him back for two laps until DRS was enabled and Raikkonen reclaimed the place.

By lap seven Grosjean had lost another place, to Lewis Hamilton. Verstappen’s retirement was the only place Hamilton had gained on the first lap, but after that he picked off Sergio Perez and then took fifth from the Haas.

With that the remaining five ‘Class A’ cars began to separate themselves from ‘Class B’. Grosjean went on to ‘win’ the sub-division. As he fell back from the rest, a gap opened up in front of him into which the leaders could made their pit stops.

One by one the front-runners passed up the chance to take advantage of the gap ahead of Grosjean. Bottas was pulling away rapidly and the stewards ruled his start had been legal, by a tiny fraction. Vettel was slowly losing touch and Ricciardo also dropping back, but none were in a hurry to exchange their ultra-softs for anything tougher.

Raikkonen was less happy with his car and was also having to juggle complicated switch changes at the wheel. Behind him Hamilton was drawing closer but clearly not in a position to get ahead.

Leaving Raikkonen out had an obvious upside to Ferrari in that he could protect Vettel from Hamilton and potentially cost Bottas some time as well when the leading Mercedes finally came in. But their options were limited: Bringing Raikkonen in and putting him on the super-soft tyre might not produce the kind of immediate lap-time advantage needed to ensure he would beat Hamilton via the ‘undercut’.

As it was, Mercedes took the initiative by bringing Hamilton in, reminding him not to follow the Ferrari down the pit lane if Raikkonen has summoned to the pits. He wasn’t, and Ferrari were left to consider whether to pit Raikkonen.

The team called him in initially, but Hamilton’s pace on his out-lap, even on a circuit as short as the Red Bull Ring, was so superior Ferrari swiftly realised it was hopeless to pit Raikkonen. They left him out.

If Ferrari hoped Raikkonen might now play a spoiler for Bottas when he was brought in, they were swiftly disappointed on that count too. The combination of DRS, fresh tyres on the Mercedes and a slight error by Raikkonen at turn three meant two Finns quickly exchanged positions.

Ricciardo holds on to the podium

Hamilton’s radio messages immediately after his pit stop indicated the Mercedes driver was in trouble. Hamilton complained of poor balance and suggested he’d added too much front wing.

Was this a ruse to dupe Red Bull into telling Ricciardo to ease off? He was told of Hamilton’s lack of pace, but as soon as the Mercedes began putting in serious lap times Ricciardo was alerted and responded. Even so, the contest for the final podium position was close.

Hamilton gave it a proper go on the penultimate lap. Ricciardo’s run out of turn one was not his best, and the Mercedes lined him up nicely at the exit of turn three. Ricciardo covered the inside of the next corner and won the contest, and a tidy final tour thwarted Hamilton’s hopes for good.

Meanwhile it was almost as close in the battle for the lead. Bottas picked up a blister and fell into the clutch of Vettel. In a chase reminiscent of Sochi, Vettel drew the Mercedes in range as the laps ticked down. There was just tenths of a second between them as the chequered flag fell.

Hopes of a double points finish for Haas were scotched when Kevin Magnussen suffered his second technical problem in as many days: A particularly cruel blow on one of the strongest weekends so far for this team.

Williams had struggled dreadfully in qualifying, both cars lining up on the penultimate row. But their race pace was better and, crucially, both made huge gains out of the lap one chaos. They filled the bottom two points places behind the Force India drivers.

Jolyon Palmer had also gone out in Q1 but found his Renault handled well on the soft tyres at the beginning of the race. It wasn’t quite enough for him to break into the points, however. He was followed home by Stoffel Vandoorne, who received a drive-through penalty for a particularly egregious violation of the blue flag rules.

Nico Hulkenberg had a horrible race: He went into anti-stall at the start, fell to the rear of the field, and had no pace on the super-softs. He finished ahead of the Saubers and the delayed Kvyat.

With his second victory in his first nine races as a Mercedes driver, Bottas can surely feel very confident about his future at the team. Going into the race weekend Toto Wolff spoke about his work so far in glowing terms while playing down the possibility Alonso might join them next year. This win must enhance his chances of remaining a Mercedes driver for 2018 at least.

While Vettel added another six points to his lead over Hamilton, Bottas has now closed to within 35 points of the championship leader. This is looking ever more like a genuine three-way title fight.