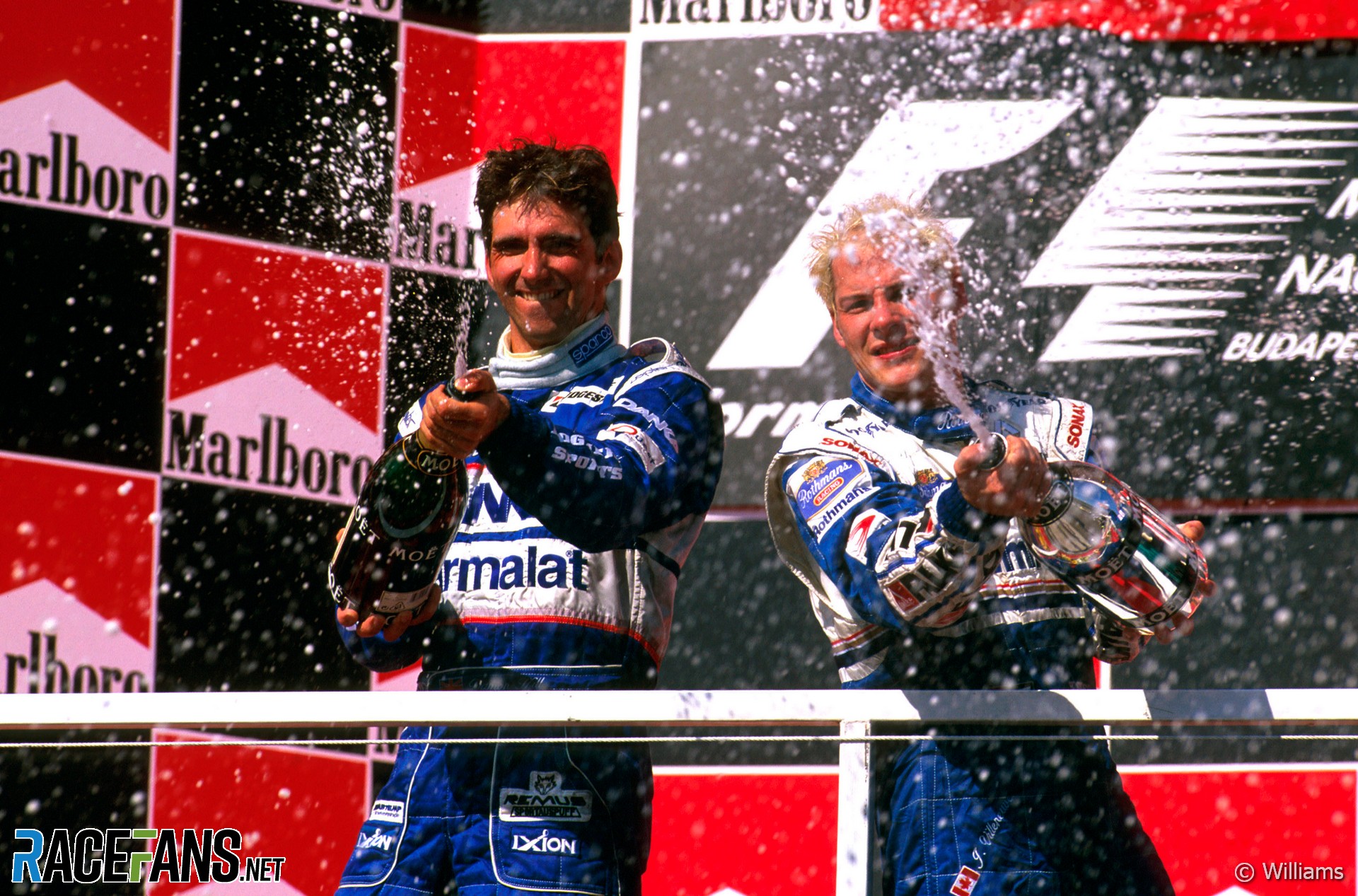 Damon Hill came within a lap of scoring what would have been one of the greatest shock wins in Formula One history on this day 20 years ago.

The 1997 Hungarian Grand Prix was the 208th race for his Arrows team. In almost two decades of competition they had never finished higher than second.

That seemed destined to change as the reigning world champion, who had shocked the F1 paddock by joining the struggling team for 1997, led most of the way at the Hungaroring. But disaster struck with the chequered flag almost in sight.

Michael Schumacher arrived at the Hungaroring in good shape. Williams had failed to make good use of their power advantage at the previous race in Germany, allowing him to open up a ten-point lead over title rival Jacques Villeneuve.

The Hungaroring promised to be a much better venue for Schumacher’s Ferrari F3100B. What’s more, he was wielding a new advantage: The first example of a revised, lighter chassis which he reckoned was worth three tenths of a second per lap.

Schumacher wielded it to superb effect as the weekend began, heading practice on Friday. But the heat at the Hungaroring put him and his fellow Goodyear drivers in a quandary over which tyres to pick for qualifying.

The softer tyres gave a clear one-lap performance advantage but would be at risk of blistering in the race. The drivers could only choose one type and most of the front-runners opted for the softer rubber. Williams driver Heinz-Harald Frentzen was a significant exception.

After qualifying it seemed Frentzen’s decision hadn’t paid off. Schumacher took pole, but Villeneuve ran him close, and the pair occupied the front row of the grid. Their team mates mirrored them on the third row, Frentzen eight-tenths of a second off Schumacher’s pace. Eddie Irvine, fifth, was having to make do with a regular 310B.

But on the second row Hill had caused a sensation. The power disadvantage of his Yamaha engine was neutralised at the Hungaroring, and with Bridgestone’s tyres giving superb grip he qualified his Arrows a stunning third. This was the highest grid position they’d occupied since Riccardo Patrese’s shock pole position at Long Beach in 1981.

Benetton, winners in Germany, had tried new front and rear suspension components in practice but were second off the pace on this much slower track. Gerhard Berger, the pole sitter in Hockenheim, lined up seventh this time, two places ahead of team mate Jean Alesi.

Johnny Herbert’s Sauber, with its year-old Ferrari engine, overcame a rear handling imbalance to complete the top ten. Sauber’s weekend had started badly with a failed fuel sample test which led to a $15,000 fine.

Schumacher’s victory hopes took a major blow before the race had even begun. During the morning warm up he spun his special lightweight F310B into the barrier at turn 11, damaging the chassis. With no spare on hand he had to revert to the same specification as Irvine.

However he still had the advantage of pole position, which he kept when the lights went out. Even better, Villeneuve made a sluggish getaway from the dirty side of the grid and Hill split the pair of them. Irvine and Mika Hakkinen also shuffled the Williams driver back to fifth.

The first lap ended with Schumacher 1.7 seconds clear of the chasing pack. But he and all the other Goodyear drivers who’d opted for the softer tyres soon found the rubber was not holding up well. Schumacher couldn’t get away from the Bridgestone-shod Hill.

Suddenly on the fifth lap of the race the Arrows was all over the struggling Ferrari. For lap after lap the pair crossed the line separated by less than half a second as Schumacher grimly hung on. Meanwhile Irvine pitted the other Ferrari as early as lap seven for fresh rubber.

“I was able to stay close to Michael,” said Hill. “But I could see from early in the race that he had blistered his tyres and was going to have a problem.”

On lap ten the incredible happened. Hill fired his Arrows down the inside of the Ferrari and was by into the lead. “I was able to pass him quite easily into the first corner,” said Hill. “Then with a clear track I knew I had to capitalise on my advantage.”

Hill scampered off while Schumacher held up a train of cars. “We clearly had a tyre which was quick in qualifying but much slower in the race,” reflected Ferrari’s technical director Ross Brawn later. “It was too fragile.”

Villeneuve, running soft Goodyears on his Williams, bided his time. “I just stayed where I was, watching the guys in front pushing and having their battles until they blistered their tyres. And sure enough, after ten laps their tyres had blistered.”

Irvine’s pit stop and Hakkinen’s retirement – due to a hydraulic problem – had put Villeneuve on Schumacher’s tail. On lap 14 Schumacher surrendered to the inevitable and pitted for new rubber. Villeneuve made it another ten laps, putting him on course for a two-stop strategy to Schumacher’s three.

Hill’s Bridgestone’s held up well enough that he had a 5.6 second lead before Villeneuve pitted. However the other Williams was also a threat. Frentzen’s gamble on running the hard tyres was paying off: he inherited the lead on lap 26.

But luck was not on the Williams driver’s side. As he came past the pits to start his 29th lap part of the refuelling valve fell from his FW19. Entering turn two a flash of flame burst from his car, which repeated as he pressed on and headed for the pits. When the car came to a stop the team saw there was no way to refuel it, and Frentzen’s race was over.

“It looked very good,” rued Frentzen, who thought he could have won. “It was no problem for me to maintain lap times at around one minute 18 seconds, and at that stage it already looked as though I would be well placed to pass Damon.”

“I had a 23 second lead before my pit stop, and if nothing had gone wrong I would still have been ahead of him when I came out.”

His demise restored Hill to the lead, 12 seconds clear of Villeneuve, who now had David Coulthard in hot pursuit. Schumacher had fallen to fourth but was in for his second stop on lap 33, which promoted Herbert in his place.

The Sauber driver had nursed his tyres when Schumacher held up the field early in the race. He managed to eke his Goodyears out to make a two-stop strategy work, which ultimate jumped him in front of Schumacher. He was on course for his best result of the season.

The race settled down somewhat in the second half while Hill shored up his advantage. The Hungaroring had always been one of his favourite tracks – he’d scored his first win there four years earlier – and he was revelling in his much-improved A18 chassis.

Hill and Villeneuve made their second stops on lap 51. Behind them Coulthard was on course for third, but an electrical fault ended his day. That put Herbert on course for the podium. Six seconds behind him Schumacher was holding up another train of cars led by his brother. Giancarlo Fisichella in the other Jordan had already spun off trying to pass the Ferrari. Behind them were Irvine in the other Ferrari and Shinji Nakano’s Prost.

By lap 73 Hill had spent most of the afternoon in the lead. With a 34-second lead in his pocket he looked on course for a shock win. Then came a worrying hesitation when he tried to accelerate: A broken washer had caused a failure in the throttle linkage.

“The first I knew of it was with about three laps to go when I had a problem with the throttle,” said Hill “It is operated hydraulically and the throttle was just an indication of a general hydraulic problem which also affected the gears. When the gears started to give trouble I couldn’t shift and the throttle didn’t work either.”

With his car only accelerating when it felt like it, Hill lost nine seconds on lap 75. The problem worsened dramatically: he lost over 21 seconds on his penultimate tour.

“At one point I was stuck in second. I managed to get it into third, but that was the end because it was a case of the throttle working when it wanted to do. Unfortunately these things get out of your control: when you can’t use the gears or the throttle, that is the end of the story.”

As the final lap began Villeneuve was bearing down on the Arrows. Hill flailed in vain as the Williams cruised past him approaching turn four, two wheels on the grass. Incredibly, as Herbert was another 26 seconds behind, Hill was able to hold on for second place.

“It stopped about three times and I am frankly amazed that I was able to get to the finish because I thought it was going to leave me parked,” he said. “But it picked up at the last second,
so I have to say I am really pleased to have finished second.”

While this drama was unfolding Nakano took a run at Irvine and knocked the Ferrari driver off, claiming the final point for sixth place in the progress.

Hill’s misfortune handed Villeneuve a four-point bonus in the championship, but he was charitable enough to admit his former team mate had deserved the victory.

“For the last 15 laps I was thinking there was a good chance that Damon wouldn’t finish the race,” said Villeneuve. “But he was actually going on and on.”

“My hopes had gone down to nothing until the last two laps, when the team told me he was slowing down a lot. So I started pushing again, and when I got close to him he was moving left and right which is normal on the last lap and when he moved over on me I went on the grass because there was no way I was going to lift.”

“He was worth a win today,” Villeneuve added. “He drove really well and he was flying.”

Become a RaceFans Supporter today and browse he site ad-free. Sign up or find out more via the links below:

25 comments on “Last-lap heartbreak for Hill and Arrows”