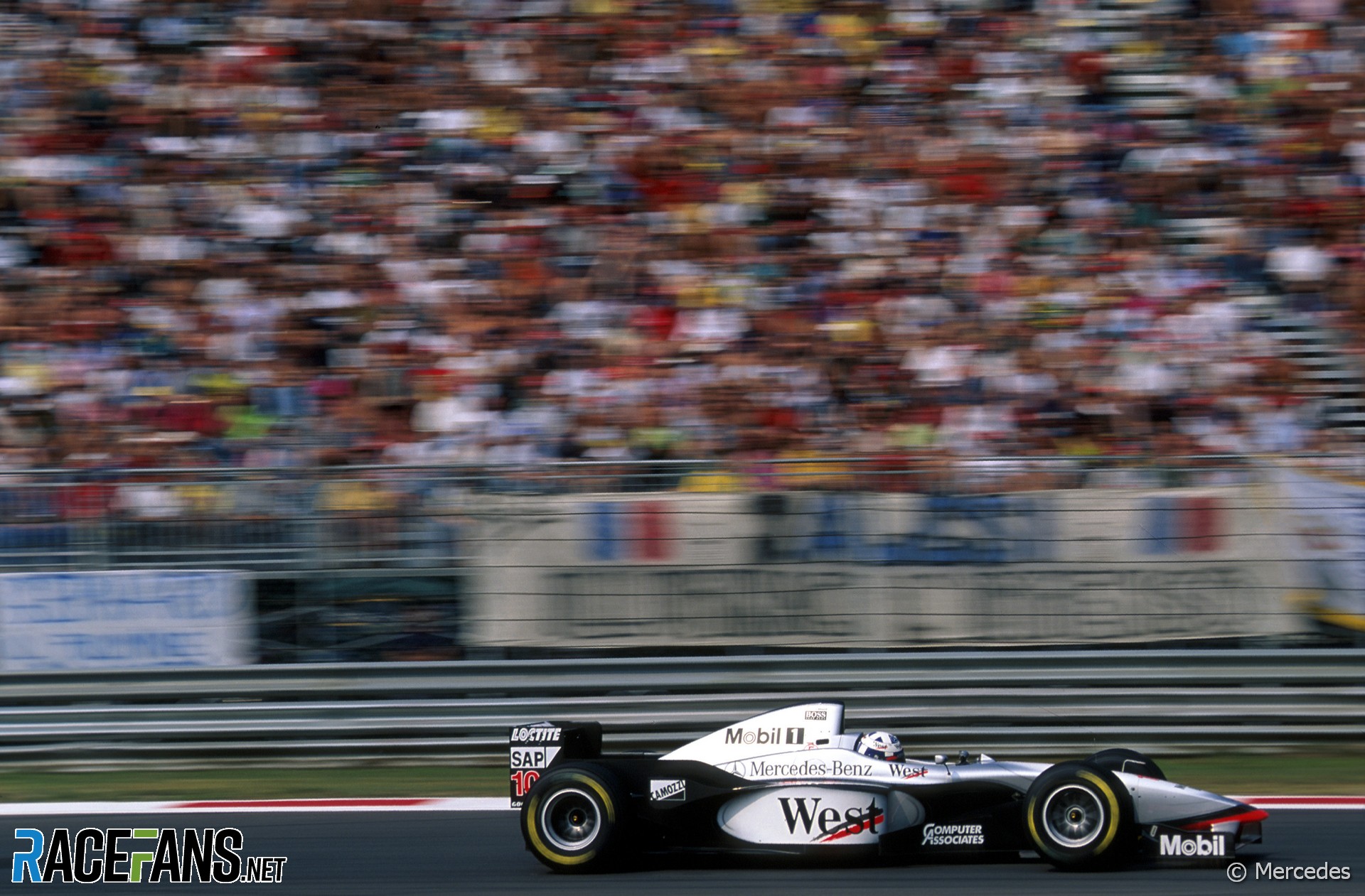 David Coulthard snatched his second victory of 1997 in the Italian Grand Prix as the championship contenders struggled on this day 20 years ago at Monza.

The Ferrari fans were left disappointed as points leader Michael Schumacher could only manage sixth, one place behind title rival Jacques Villeneuve.

Jean Alesi’s hopes of a second grand prix victory were dashed when McLaren beat Benetton in the pits to secure victory for Coulthard.

Ferrari on the back foot at home

Schumacher arrived at Ferrari’s home race with an 11-point lead in the championship over Villeneuve. And following his victory at Monza 12 months earlier, hopes of a repeat were high.

The controversial decision to install tyre barriers at the chicanes had shaped the previous race at Monza, but for 1997 new kerbs had been installed at the chicanes instead of the tyres.

“The kerbs are completely different now, and as we saw in testing they do their job quite well,” he explained. “Since the new kerbs had been installed we have asked for two or three modifications, but the top edges are still a bit too sharp. If cars spin over them we may still see some damaged monocoques.”

However Ferrari found other cars were coping with the kerbs better than theirs. “I would say that Jordan and Benetton have a good chance of being in front,” said Schumacher. “Their cars looked very strong in the test last week, and McLaren was running strongly in the earlier Monza tests.”

“Even so, my priority is obviously to watch what Villeneuve is doing. And comparing our situations, I think I have a chance to stay with him.”

Schumacher had gained a rare perspective on Ferrari’s car development by testing Sauber’s Ferrari-powered car at Fiorano. Rumours claimed he had reported back to Ferrari that Sauber’s car handled better.

Giancarlo Fisichella’s Jordan-Peugeot had been quickest in the five-day test at the track which preceded the race weekend. Schumacher had courted controversy by continuing to drive for four laps after a red flag was shown when McLaren test driver Nick Heidfeld came to a stop. The was no sanction for the Ferrari driver.

Villeneuve, however, again fell foul of the yellow flag rules during practice for the race. He was given a one-race ban suspended for four races for failing to slow when yellow flags were shown while Schumacher’s car was being recovered. This would have serious ramifications in a few races’ time.

The coverage of the race briefly came under threat from a coalition of anti-smoking groups which brought a court case against local broadcaster RAI. Most of the cars carried tobacco sponsorship at the time. The legal action failed.

In another off-track development, actor Sylvester Stallone appeared at the race to confirm his plans to appear in a new Hollywood film about Formula One. Asked if he was interested in performing for the cameras, Gerhard Berger replied: “It depends if it’s a sex movie or not…”

Benetton and Jordan were still fighting over Fisichella’s services for 1998 and qualifying supplied another reminder of why his signature was so highly prized. He almost delivered on Jordan’s testing pace, missing out on pole position by a mere seven-hundredths of a second.

He was relegated to the second row in a dramatically close session by Heinz-Harald Frentzen. “On the second lap when I tried to go for a qualifying time I ran over some stones in the first chicane,” the Williams driver explained. “That gave me oversteer and I ran over the kerb, very hard, which made me go sideways and lose several tenths. I had no laps left, so I came into the pits.”

Pole position went to another Renault-powered driver but for once it wasn’t Frentzen’s team mate: Jacques Villeneuve shared the second row with Fisichella. Instead it was Jean Alesi, who did the only sub-1’23 lap of the session to put Benetton on pole for the second time in 1997.

“There are some circuits, like this, where you feel a lot more comfortable than on others,” said Alesi after taking pole for the second time in his career and repeating his achievement at the same track three years earlier.

“On my first run I could see I was very slow,” he explained. “There was nothing I could say to the team because I had nothing to complain about on the car, which was handling just the same as it did this morning. The brake pedal was a bit long, but that did not affect the balance. So I just asked for another set of tyres so that I could have another try – and it was a good one.”

The McLarens occupied row three led by Mika Hakkinen, who following his massive shunt at Spa had experienced another during the Monza test due to left-rear suspension failure. They were followed by Berger and the second Jordan of Ralf Schumacher.

Michael Schumacher and Eddie Irvine shared the fifth row of the grid. It was Ferrari’s worst qualifying performance at Monza for 11 years and the race was clearly going to be a case of damage limitation for Schumacher’s championship hopes.

At such a power-sensitive track it was no surprise to see all four V8 cars lined up at the back. Minardi brought up the rear, Ukyo Katayama out-qualifying team mate Tarso Marques despite suffering a scare in practice. Approaching the Parabolica corner on Friday Katayama’s suspension failed, sending him off the track at over 320kph. The Medical Car was sent to the scene but the former Formula One driver at the wheel, Arturo Merzario, managed to get stuck in a gravel trap. Fortunately Katayama was unhurt and able to start the race.

When the lights went out two drivers made particularly good getaways which transformed their races.

The first was David Coulthard, who deployed the 740bhp from his Mercedes V10 superbly and out-dragged Hakkinen, Villeneuve and Fisichella to the first corner. From sixth on the grid he completed lap one in third behind Alesi and Frentzen.

Meanwhile Schumacher’s Ferrari had moved up two places which, crucially, meant there was just Hakkinen between him and Villeneuve as they began lap two. Berger, Irvine and Johnny Herbert completed the top ten, while the other Schumacher had fallen to 11th after a poor getaway.

The cars settled into order for the first half of the race, unable to get close enough to attempt a pass. The race would hinge on which team had fuelled their cars heaviest and could dare to stop latest.

As the drivers neared their single mid-race pit stops the pace intensified at the front. Coulthard set the fastest lap on the 18th tour, then Villeneuve lowered it two laps later. By lap 27 Alesi, Frentzen and Coulthard were covered by just eight-tenths of a second. The Benetton was beginning to hold them up and Fisichella was making inroads from fourth position.

Williams took this as an opportunity to bring Villeneuve in from fifth place. The early stop was a gamble and his comparatively slow turnaround also didn’t help his cause. The team brought Frentzen in from second the next time around, but Benetton and McLaren stuck to their plan.

Three laps later Alesi and Coulthard came in from the lead together. Unconcerned about being trapped behind the Benetton in the pits, Coulthard followed the leader in and was treated to a slick stop by his team which got the McLaren out ahead. Meanwhile Frentzen’s pace had been restricted by his high fuel load and Coulthard emerged to claim the net lead.

Both Williams drivers later admitted their pit stops had been too early – the latest in a series of tactical errors by Williams. Hakkinen stayed out until lap 34 and rejoined the track having jumped ahead of Fisichella and Villeneuve. But a right-front tyre delaminated within two laps, sending him back into the pits.

Ralf Schumacher ran two laps longer than Herbert but still came out of the pits behind him on lap 32. Six laps later he got into the Sauber’s slipstream exiting the Parabolica and had the move made as they approached the Rettifilio. But the Jordan driver drifted back towards the side of the track Herbert was still occupying, firing the Sauber off the track at over 340kph.

Herbert was unhurt and the younger Schumacher, who was also forced to retire, was unrepentant. “I left him enough space,” insisted the Jordan driver. “Maybe he should have braked a little bit earlier. I was already past so I didn’t see him. I think it’s his mistake, not mine.”

The stewards didn’t get involved – they seldom did 20 years ago. In Herbert’s view “it was a silly move by Ralf, and the best thing is that I got through it without being injured.”

Since his victory in the season-opening race at Melbourne, Coulthard had only managed to score four more points. An engine failure cost his team mate a likely win at Silverstone. But at Monza the car held together and Coulthard clinched victory again.

“This weekend we actually found something on the car which may have contributed to the unreliability,” he revealed afterwards. “It was modified this morning, at the track, and the warm-up confirmed that the problem had been improved. So I had no doubts at all about any part of the machinery.”

The top five flashed across the line separated by just six-and-a-half seconds, Coulthard followed by Alesi, Frentzen, Fisichella and Villeneuve. Schumacher was a further five seconds back, but to his relief had lost just one point to his championship rival.

“We knew before coming here that this wasn’t going to be a great track for us and it would be worse for Ferrari,” said Villeneuve afterwards. Still he must have hoped the weekend had been a little better for him, particularly given the fact his team mate was on the podium. This was briefly in doubt as Frentzen and Alesi’s cars were subjected to lengthy checks of their electronics software, which were eventually ruled legal.

Seven laps before the chequered flag fell Damon Hill’s Arrows-Yamaha expired in a vast cloud of smoke as he joined the pit straight. His decision not to join McLaren for 1998 must’ve weighed on his mind as he noted the result of the race.

“Terrific to see David get a grand prix win,” he told UK television before leaving the track. “And McLaren as well, they’ve done a good job…”

With that Hill headed for the exit. Arrows team principal Tom Walkinshaw had already departed so Hill got a lift back on Eddie Jordan’s plane, where they began talking about their plans for 1998.

RaceFans is run thanks in part to the generous support of its readers. By contributing £1 per month or £12 per year (or the same in whichever currency you use) you can help cover the costs of creating, hosting ad developing RaceFans today and in the future.