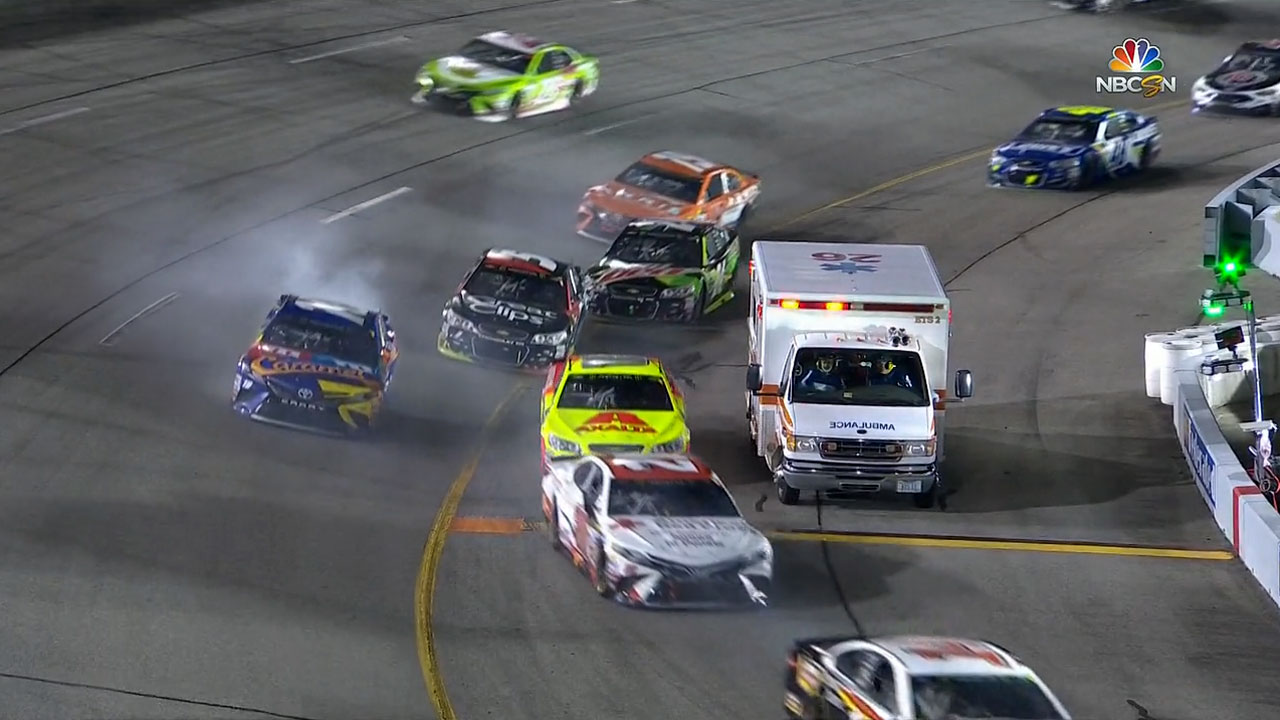 A bizarre incident involving an ambulance almost cost a NASCAR driver a shot at the championship.

Matt Kenseth was one of the 16 drivers to qualify for NASCAR’s title-deciding play-offs despite retiring from Saturday’s 300-mile race at Richmond after a strange incident involving an ambulance. The safety vehicle’s driver failed to stop when instructed during a caution period which forced several drivers to take avoiding action. They included Kenseth, who ran into the back of Clint Bowyer. Championship leader Martin Truex Jnr described the incident as “inexcusable”.

Truex lost a healthy lead when another caution period was called with four laps to go in the race. He was then beaten out of the pits by Kyle Larson and Denny Hamlin delivered the coup de grace by sticking Truex into the wall.

Pierre Gasly gave his Super Formula rivals a clear demonstration of the advantage of starting on softer tyres as he scorched from fifth to second at the start of the Autopolis round. That put him en route to his second consecutive victory.

Gasly started the race on the new Yokohama soft compound, which was unproven after its introduction in the previous round of the championship. Following his superb getaway Gasly closed on leader Tomoki Nojiri, who had started from pole.

Gasly pitted on lap 23, fitting the medium for his second stint, while Nojiri failed to react, only pitting onto the soft tyre on lap 38. This was a huge mistake, as Gasly held a five-second lead after the stops, the longer soft tyre stint proving to be the right choice.

Nojiri’s race was further compromised when he collided with Kamui Kobayashi and had to pit for a new nose. This gave Gasly an easy run to the line ahead of Felix Rosenqvist – who opted to fit the soft tyre on only lap six, again feeling the full benefit of the durable yet grippy tyre. Rosenqvist’s Le Mans-Toyota team mate Kazuya Oshima completed the podium.

Two wins and a second place – coupled with two non-scores for closest rival Maximilian Gunther – meant Lando Norris leap to a 73-point championship lead. The rookie can clinch the title when the series moves on to the Red Bull Ring.

Norris won the first from pole position ahead of Jake Hughes and Joey Mawson – who claimed his maiden podium – while Gunther was only thirteenth and the third championship contender Joel Eriksson in tenth. Hughes went one better in race two as he started from pole position to claim his first win, with Norris following him home in second. Callum Ilott completed the podium to close in on Eriksson for third in the championship, who finished just ninth with Gunther out of the points again in 12th.

Norris further extended his advantage in race three with his ninth win of the season ahead of Hughes and Ralf Aron, the latter taking just his second podium of the season. Ilott had started on pole position but was passed by Norris after an early Safety Car and slipped to fourth at the end, with Gunther and Eriksson seventh and eighth.

Lucas Auer won the first race of the weekend as he reigned his championship battle at the Nurburgring, rising from sixth to second, nine points behind leader Mattias Ekstrom.

Augusto Farfus took the lead from pole sitter Auer in race one but the BMW driver was caught out by rain which arrived after his first pit stop. Williams reserve driver Paul di Resta had jumped Auer during the stops but raved his team mate by to win. Robert Wickens and Maro Engel completed a Mercedes sweep of the top four places.

Marco Wittmann took pole for race two but was jumped at the start by di Resta. Wittmann hit back and retook the lead on lap 15 and after Wickens took through the stops Wittmann again fought back. However he made contact with Wickens and fell to third behind di Resta.

Auer could only manage 13th after a spin, failing to capitalise on an opportunity to leapfrog Ekstrom in the championship having started ten places ahead of his rival.

Marc Marquez took victory on the final lap at Misano to take a joint lead of the championship with Andrea Dovizioso, who finished third. Danilo Petrucci led for the majority of the race until Marquez took it from him and disappeared into the distance at the first corner, with Petrucci settling for second. Lorenzo had originally led from the start after a brilliant getaway, but fell on lap seven.

While Formula One heads to Singapore the following series are also in action next weekend: