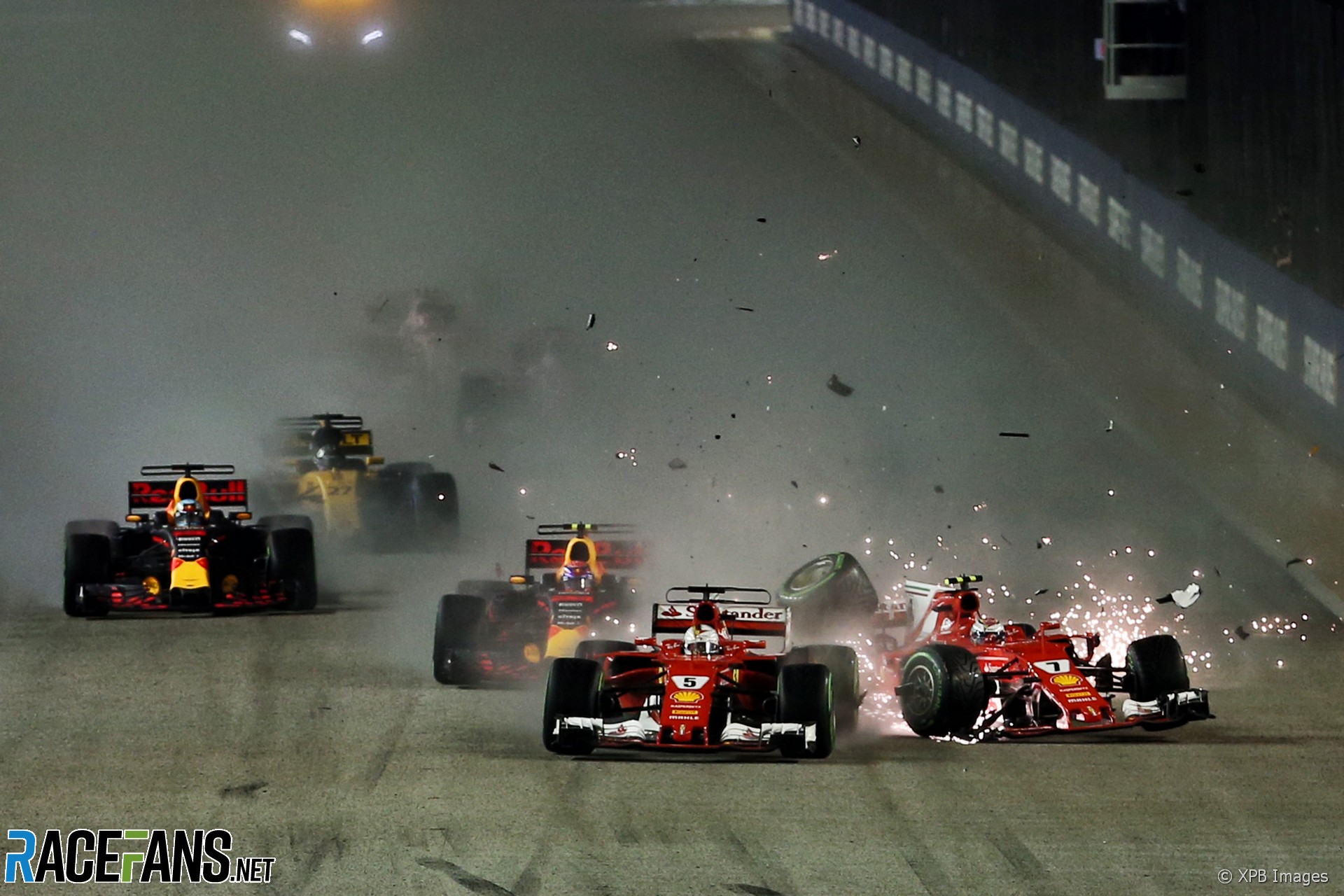 If Lewis Hamilton wins his fourth world championship in two months’ time, the Singapore Grand Prix may well be seen as a decisive moment.

As the cars lined up on the grid Sebastian Vettel occupied pole position, four places ahead of Hamilton. Had they finished in that order, not an unrealistic prospect on a circuit where overtaking is formidably tough, Vettel would have re-taken the championship lead from Hamilton and headed to Malaysia with a 12 point margin over the Mercedes driver.

Instead Vettel’s race was over after a few corners and Hamilton motored on to a third straight win which gives him an imposing 28-point lead.

The near-impossibility of overtaking another car in Singapore makes the sprint to this first corner one of the most fraught of the season. Last year Nico Hulkenberg’s race ended before the cars got that far as the drivers vied for position in the midfield.

This time the collision happened at the front of the pack. A heavy pre-race shower had left the track wet, but just clear enough for a standing start to be considered acceptable. The field was split between whether to go for full wets or shallow-grooved intermediate tyres. But the downforce advantage of the big three teams counts in these circumstances, and all their drivers opted for intermediates.

Kimi Raikkonen had expressed concerns about the decision not to use full wets, but when the lights went out he made a peach of a start. That shortly created a problem for his team mate, who had got away less well and was edging towards Max Verstappen, who had a chance to go down the inside.

The flying Raikkonen drew alongside both and suddenly both Ferraris were converging on the Red Bull. Contact was made, the RB13 firing Raikkonen’s car into Vettel’s. Raikkonen’s out-of-control Ferrari then skidded towards turn one where, with sickening inevitably, it smashed into Verstappen a second time. The fast-starting Fernando Alonso was now besides both of them and Verstappen almost tipped the McLaren onto its roll hoop.

Vettel had managed to slow his car for turn one and kept the lead of the race with Hamilton on his tail. But as he accelerated towards turn five his damaged car snapped sideways into the barrier, tearing the nose off. He was told to stop the car. “You sure?” he asked. “Yes,” came the dispassionate reply. “OK,” Vettel replied. “Sorry guys. I’m really sorry.”

Afterwards Ferrari tried to pin the blame on Verstappen. The stewards drew the correct conclusion that it had been nothing more than a racing incident. But as Verstappen observed, Vettel’s strong defence at the start had been an incautious approach for a driver with so much to gain and lose in the championship fight.

“Today we were on the wrong side of the track, which doesn’t help,” Vettel offered by way of explanation afterwards. “I had an average start and then I moved slightly to the left trying to defend my position from Max.”

Raikkonen reckoned “I don’t think I could have really done anything differently to avoid it, apart from doing a bad start and not being there.” In fairness to Vettel, he didn’t seem to have accounted for the possibility his team mate was where he was.

The field followed the Safety Car through the pits for three laps while the track was cleared of debris. Hamilton, who’d briefly feared Vettel’s spinning Ferrari was going to wipe him out, was being followed by Daniel Ricciardo. The Red Bulls had been very quick over a race stint in practice but Ricciardo was nursing a gearbox which his team feared would not last until the end.

Nico Hulkenberg had not lost any places at the start and was now running third. Against expectations, this presented him with a chance to avoid setting a new record for starting the most races without finishing on the podium. Renault had started both cars on the full wet weather tyres as they had found it difficult to make the intermediates work at Monza.

From 12th on the grid, Sergio Perez’s Force India was now fourth ahead of Valtteri Bottas and Jolyon Palmer. The latter swapped positions when the Safety Car came in thanks to an inspired restart by the under-fire Renault driver.

Hamilton edged out a five-second lead over the gearbox-troubled Ricciardo. But opportunity knocked for Red Bull on lap 11 when Daniil Kvyat, shortly after telling his engineer to let him concentrate on driving, conducted a real-world test of the expanded TecPro barrier at Memorial corner.

The Safety Car was scrambled and Mercedes opted to leave Hamilton out on his warm, worn intermediate tyres. Red Bull did the opposite, bringing Ricciardo in. When Hamilton complained about being left out on old tyres his race engineer Pete Bonnington pointed out Red Bull were always likely to do the opposite to them and had they brought Hamilton in, Ricciardo would have been left out to take track position.

Hamilton said afterwards it “was a bit of a surprise to me that [Ricciardo] could have a free stop and be behind me on brand new tyres”. But the Mercedes driver was revelling in his car’s handling on a track due to the humidity which was drying slowly.

He likened the conditions to one of his previous wins on a wet street track. “If you remember back in 2008 in Monaco, I just nursed the tyres. We often shred our intermediate tyres and the Red Bulls are usually very, very good on them, so today was just about making sure we managed them to the maximum. I was able to keep them cool and not have any degradation.”

When the Safety Car came in on lap 14 this looked like Ricciardo’s opportunity to go on the attack. But Hamilton pulled away again and had the luxury of a ten-second lead as the track grew dry enough for the most daring drivers to consider slicks.

Kevin Magnussen can usually be relied upon to channel the spirit of Jean Alesi and be the first to risk dry-weather tyres. Sure enough on lap 24 he appeared in the pits for a set of ultra-softs, joined later that same lap by Felipe Massa’s Williams. Two laps later Lance Stroll followed them, and now the tipping point had been reached.

Ricciardo was increasingly inclined to take a shot at slicks but the gaps behind him were not working out. Eventually his team bit the bullet and brought him in, knowing he would emerge behind Palmer and that venturing off-line to pass the Renault would be fraught with risk on such a slippery track.

Palmer was soon out of the way, however, and by pitting one lap before the leader Ricciardo was able to take a big bite out of his lead. Once Hamilton’s slicks were up to temperature, however, Ricciardo’s performance was once again kept in check.

Hamilton’s progress to the finishing line was briefly disturbed by a third and final Safety Car period, caused by Marcus Ericsson who hit the Andersen Bridge. The Sauber took several laps to be removed from one of the narrowest sections of track on the calendar.

Meanwhile Bottas had arrived in third place with little drama. The three cars which had separated him from Ricciardo had all started on full wets which meant they pitted during the first Safety Car period.

“I was struggling in the beginning of the race in the wet just purely with the pace,” he admitted afterwards. “Have been struggling with the pace all weekend but as the track started to dry up everything was feeling actually not too bad and could keep up with the guys ahead.”

The Mercedes driver might have had to worry about Hulkenberg but the Renault power unit was suffering an oil leak. That forced Hulkenberg into the pits and eventually ended all hope he might finish at all, let alone in the top three.

As in China, Carlos Sainz Jnr had been bold with his tyre selection at the start and now came the pay-off. He inherited fourth place from his future team mate which was his as long as he kept Perez at arm’s length. Palmer was up to sixth ahead of Vandoorne, Stroll and Romain Grosjean. Hulkenberg’s final demise promoted Esteban Ocon to the final points place.

Three Safety Car periods and the reduced pace caused by the wet conditions meant the race hit the two-hour time limit three laps shy of its scheduled distance. During the final stint Mercedes initially advised Hamilton to moderate his pace in order to keep the field bunched up and make it harder for any drivers to pit in the event of a Safety Car period. But Hamilton felt more comfortable driving to his own limit, so Mercedes let him dictate the pace.

Hamilton’s seventh win of 2017 was surely his least expected, at least until he rounded turn five in the lead on the first lap. While no driver won back-to-back races before the summer break he’s now taken three victories in a row.

And a 28-point lead in the championship moves him past that valuable psychological hurdle of being more than a victory ahead of the competition. Nonetheless he insisted it “won’t change anything.”

“Whatever it is with the approach that I have, there’s no reason to change it. It’s a perfect balance of being aggressive and cautious at the same time.”

It was that balance which Vettel failed to strike perfectly at the start of the race, and it could prove to be a pivotal moment for the championship outcome.