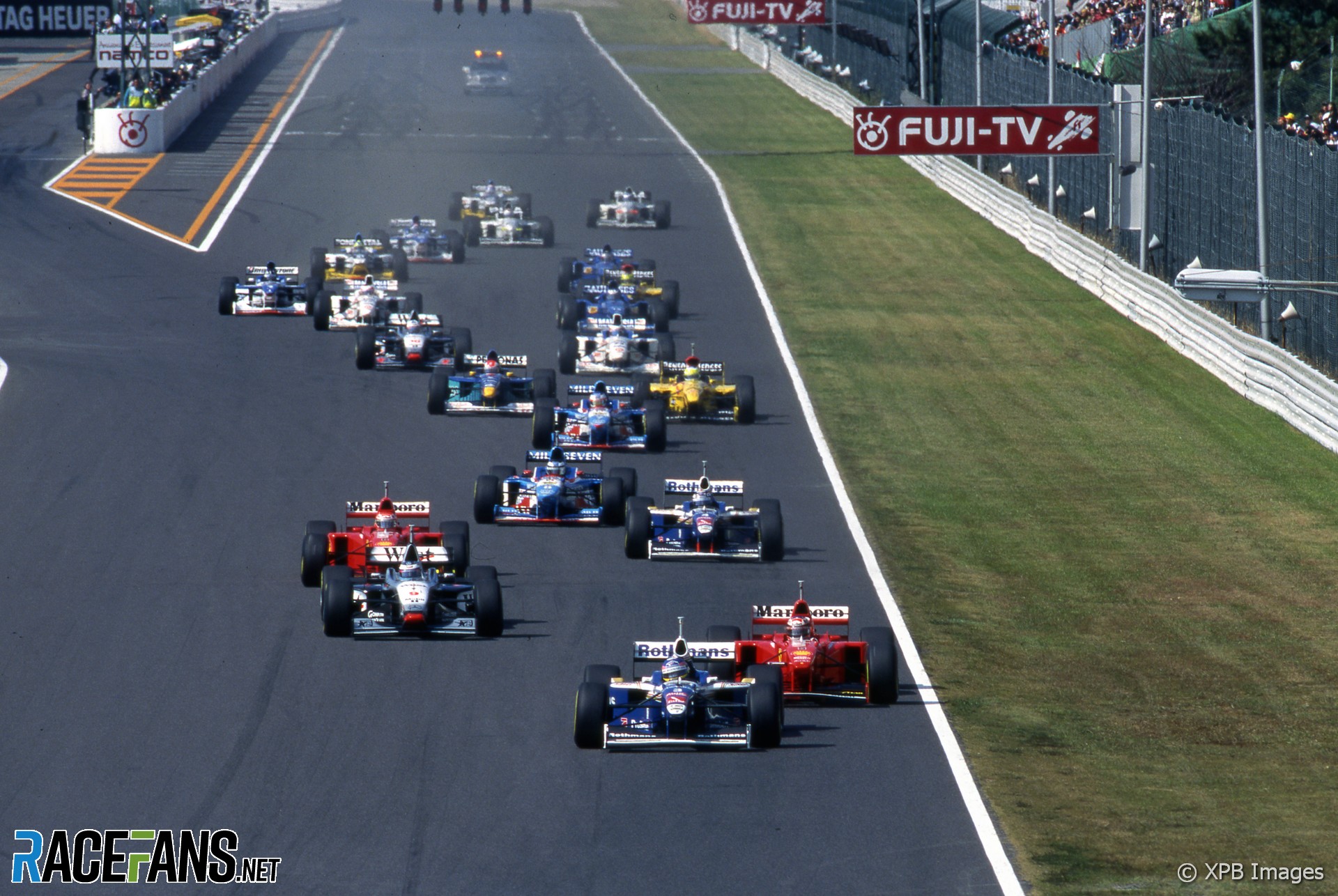 Victory for Michael Schumacher in the 1997 Japanese Grand Prix at Suzuka set up a thrilling championship showdown. But the race was anything but straightforward.

Jacques Villeneuve arrived in Japan needing to take just one point off his rival to clinch the championship.

The points situation had changed dramatically in the previous two races. Villeneuve had scored a maximum 20 to Schumacher’s one. The Ferrari driver was already talking in terms of the title being over. “We have already succeeded in our expectations this year,” said Schumacher before the weekend began. “Even if we don’t win the championship we will have fulfilled our expectations, or even more.”

Villeneuve’s chances of wrapping the title up with a race to spare looked good when he beat Schumacher took pole position in a close qualifying session.

Then came the news which stunned the paddock: Villeneuve was being thrown out of the event.

Accelerating out of Spoon curve during the Saturday morning practice session, Villeneuve passed Jos Verstappen’s stranded Tyrrell which was being recovered under waved yellow flags. Villeneuve, along with five other drivers, failed to back off for the warning.

The FIA had introduced a series of escalating warnings to force drivers to slow down for yellow flags. Johnny Herbert, Rubens Barrichello, Ukyo Katayama and Schumacher were among those who failed to back off and all received one-race bans which were suspended until the end of the season.

Heinz-Harald Frentzen had been caught before so he was given a ban suspended for five races. And Villeneuve, who had already committed the same offence on three previous occasions, was hit with an immediate ban from the next race.

This had huge implications for the championship. Villeneuve being thrown out menat Schumacher had the chance to turn his nine-point championship deficit into a single-point lead ahead of the final race at Jerez.

Later, Villeneuve admitted he’d realised the risk he was taking as he approached the yellow flag. “Then I thought ‘oh, it’s a straight’,” he said. “And I ended up doing it, and I shot myself in the foot.”

“I did spend about a second thinking about it. Even after I passed the car I thought about hitting the brakes so it wouldn’t appear on the timing screens, which is what they look out for. But then I thought ‘no, I don’t want to play silly games like that’. So I didn’t. But I will in the future.”

Inevitably Williams lodged an appeal again Villeneuve’s ban. With no time to convene a hearing, the pole sitter was allowed to take part in the race but did so knowing he was very likely to lose any points he gained. Many questioned the wisdom of daring to appeal: Three years earlier Jordan had lodged a similar protest for Eddie Irvine, only to see the FIA increase his ban from one race to three.

The setback piled the pressure on Villeneuve who before the weekend began had admitted winning the championship in 1997 was “very important” for him, partly because of the plan to drastically change the cars for the next season.

“First of all the rules change for ’98 – this could be the last real season of Formula 1,” he said. “So it is an important season.”

“And then last year I was a rookie, I was behind all of the season and got close towards the end. So for a first season that felt good. It wasn’t a question of losing it, it was more a question of not winning it, which was acceptable, there was always this year.”

“But this year if we don’t win it it’s more that we lost it in a way because we had the most competitive car at the start of the season.”

A rejuvenated Ferrari added to the pressure on Villeneuve. The F310B’s new front wing, which flexed visibly under peak loadings around the super-fast Suzuka course, helped the team record its best combined qualifying result of the year. Schumacher lined up alongside his title rival, just six-hundredths of a second slower, and Irvine backed him up in third.

McLaren’s fast-starting cars had been a threat in recent races and Mika Hakkinen threatened to get involved in the title fight from fourth on the grid. David Coulthard was well down in the team’s other car, however.

While Schumacher could count on help from Irvine, Villeneuve’s team mate Heinz-Harald Frentzen was down in sixth, edged out by an on-form Gerhard Berger. Next came Jean Alesi in the second Benetton.

Bridgestone weren’t able to recreate their giant-killing form from Spain and Hungary at their home race. Olivier Panis was the highest Bridgestone-show qualifier in tenth place despite his Prost benefiting from a new S-specification Mugen-Honda engine.

Qualifying was red-flagged after Gianni Morbidelli crashed heavily at Dunlop. The Sauber driver, who’d been forced out early in the season with an arm injury, was unable to start the race.

Villeneuve’s predicament created the circumstances for a strange race. He knew that he was unlikely to keep any points he scored at Suzuka, so the best he could do was limit Schumacher’s potential to increase his score.

The scenario was similar to last year’s championship deciding race where Lewis Hamilton needed two of his rivals to overtake Nico Rosberg, so he backed the field up at key points during the race. But Villeneuve could afford to take greater risks and didn’t have to respect the fact he was racing his team mate.

All year long Schumacher had been in the advantageous position of being able to rely on help from his team mate. But Irvine would play a more crucial role than usual in what turned out to be a strange race.

“We have been speaking about [team orders] all year,” said Irvine. “I know the situation. I have to help Michael as best I can.”

The tone of what was to come was set immediately as the starting lights went out and Villeneuve swerved across Schumacher’s bows, determined to keep the Ferrari back. Sure enough, he hadn’t made it halfway around the first lap before he began slowing the field in the hope someone would try to pass Schumacher.

Villeneuve’s hopes improved from the start when Hakkinen used another rapid McLaren start to split the two Ferraris. He was sat on Schumacher’s tail as Villeneuve brought the field around at the end of a steady first lap, two seconds covering the top six cars.

Ferrari, however, had planned for this. As Villeneuve slowed the field exiting the Esses, Schumacher appeared to briefly lift in front of Hakkinen, and Irvine darted around the pair of them. He was now on Villeneuve’s tail, who had no interest in fighting him, so he let the Ferrari go.

At this point the race was verging on the comical. While Villeneuve backed up the field again hoping Hakkinen would take a pop at Schumacher, Irvine pulled five seconds clear in a single lap. By lap six he was 12 seconds ahead and last-placed Ukyo Katayama was 12 second behind Villeneuve.

Now Villeneuve put his foot down. Either he’d given up on anyone passing Schumacher or he was wary of Irvine getting so far ahead he could make his pit stop and come out ahead. But the race swung in Ferrari’s favour as McLaren and Benetton pulled their cars in between laps 13 and 14. Now Ferrari could pit Irvine and bring him out with minimal traffic ahead of him, which they did on 16.

Williams were running out of options. Keeping Villeneuve ahead of Schumacher was their last best chance to influence the race in his favour but here too they slipped up. When Schumacher came in on lap 18, Villeneuve was left out for an extra lap as the Ferrari driver set a new fastest lap of the race. Villeneuve left the pits fractionally too late to keep Schumacher behind, though the Ferrari driver dived inside the Williams as Villeneuve drifted towards the racing line at turn one.

Schumacher pointed an accusing finger at Villeneuve afterwards. “I am not sure whether it was the correct thing to do, to come across the road and try to push someone,” he said. “I was able to correct my own situation and took him on the inside, but it could have been very dangerous.”

At this point Irvine was 14 seconds up the road. “I was just waiting for the phone call,” he explained. Sure enough Ferrari quickly told him to back off and let Schumacher through to maximise his drivers’ championship score. Irvine duly cut his pace by six seconds a lap and the pair swapped places again at turn six. Now it was Irvine’s turn to keep Villeneuve bottled up, but doing this cost him time which eventually helped Frentzen to get ahead. He beat Irvine to second place and by doing so sealed the constructors’ championship for Williams.

The final kick in the teeth for Villeneuve came when he made his second pit stop early, in a bid to get out from behind Irvine, but the refuelling hose didn’t go on properly. That dropped him to fifth behind Hakkinen.

Frentzen made a fight of it in the closing stages, closing in on Schumacher and perhaps giving the Williams pit wall cause to wonder why they’d let him lose so much time in the queue behind his team mate at the start. His cause was aided by the driver he’d replaced at Williams, Damon Hill, who didn’t exactly dive out of the way when Schumacher prepared to lap him. The Arrows driver, grappling with a gearbox fault and a broken head rest, later said he was waiting to let Schumacher through in a safe place.

Villeneuve took the flag just in front of the three-stopping Alesi, with Johnny Herbert close behind. Fisichella, Berger and Ralf Schumacher also finished on the lead lap, while Coulthard went off at 130R on the final tour.

Schumacher’s victory meant a championship which seemed to be lost was back within his grasp. And he admitted he owed a debt to his team mate. “I have said many times that Eddie is a great driver and a fine team mate,” he said. “I really have to thank him for this victory. And if any question marks have been raised about his future, I think they should be forgotten now.”

Nine days after the race, to no great surprise, the FIA rejected the appeal from Villeneuve and Williams. This meant he did not score two points for fifth place and instead of heading to the final round with a one-point lead, Villeneuve was one point behind Schumacher with just the final race at Jerez left to run.

17 comments on “Villeneuve disqualification sets up championship showdown with Schumacher”