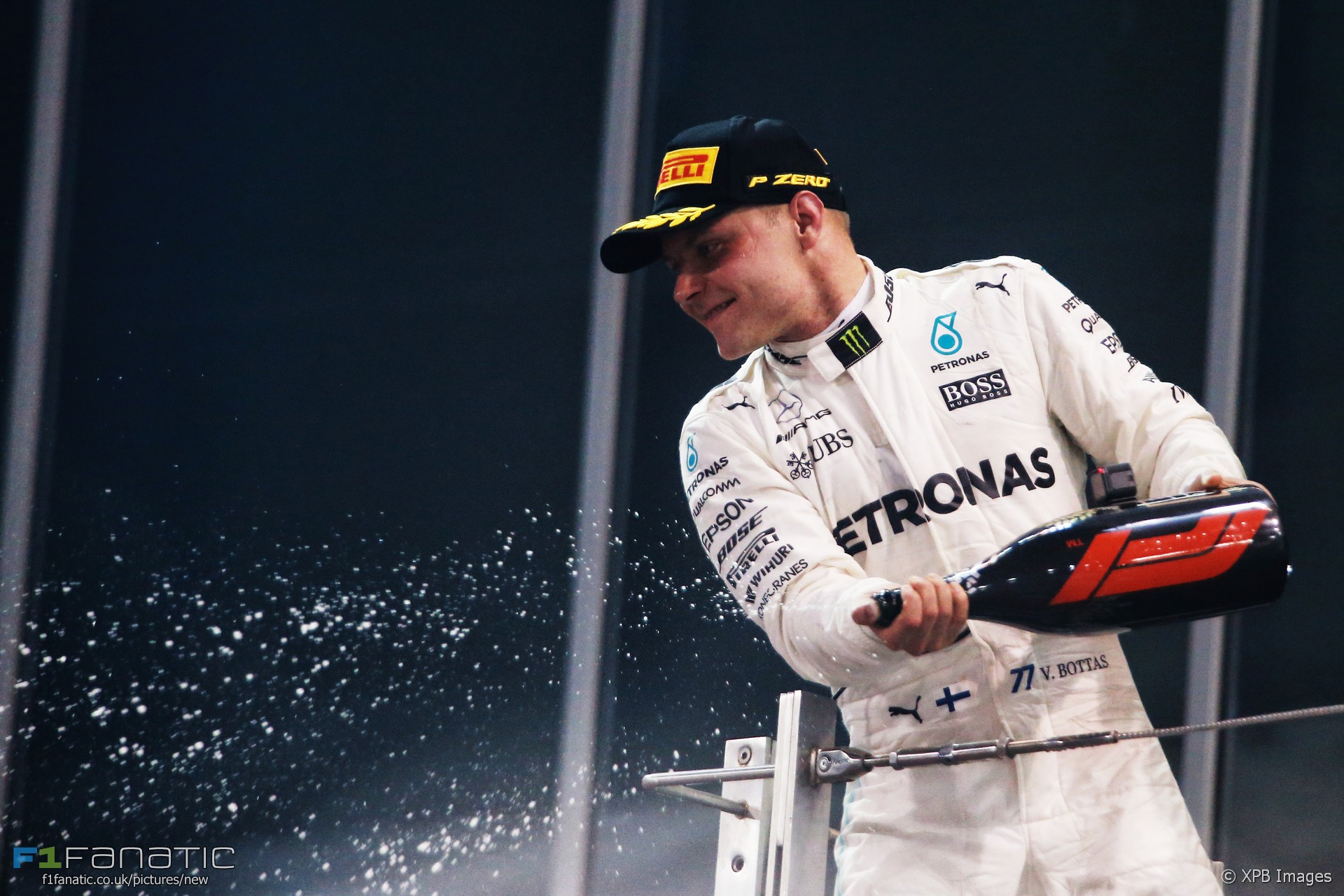 The 2017 F1 season deserved a better ending than this.

It was the year Mercedes finally had proper competition. For more than half the season the driver at the top of the points table wore red overalls instead of grey ones.

Then Sebastian Vettel’s title hopes collapsed. A championship battle which for so long looked certain to come down to the final race was over with two races to spare. Lewis Hamilton’s superb post-summer break run ensured that.

Yas Marina has only ever produced memorable races when the championship was still open. So it can’t have surprised anyone that this dead rubber race was instantly forgettable.

Bottas stays ahead this time

First among those with a reason to remember this one was Valtteri Bottas. Whether he was back to his best or merely being flattered because his team mate was no longer giving it a hundred percent after sealing the title, Bottas had clinched his second consecutive pole position.

That counts for a lot at Yas Marina, where the run to turn one is a brief 300 metres and the braking zone is short, leaving little opportunity for position-swapping. Sure enough, he easily converted his pole position into the lead. This would have come as a great relief after he lost the initiative at the last race in Brazil.

At the end of lap one the whole top 12 was still in the same position they had started. Vettel was pursued by Daniel Ricciardo, then their team mates. Nico Hulkenberg had regained seventh places from Sergio Perez through the simple method of declining to go around turn 12, for which he would shortly be penalised five seconds.

Through the opening stint Hamilton sat around two seconds behind Bottas. By lap 16 it was becoming clear that a gap behind them was opening up which they could use to make their pit stops and rejoin in clear air. Bottas edged his lead out by a few tenths more than came in on lap 22.

Hamilton’s brief spell in the lead lasted three laps. He took four tenths out of Bottas on his team mate’s first full lap out of the pits, but the next time around Bottas was quicker in the middle sector and that meant it was time for Hamilton to come in. Despite a fractionally quicker pit stop, Hamilton rejoined back in second place.

Tyre degradation was so low that further pit stops were not going to happen unless there was a Safety Car or VSC interruption. Hamilton therefore had to pass Bottas on the track.

Hulkenberg had demonstrated this wasn’t necessarily the case. Following his off-track pass of Perez he had pulled out enough of a gap over the Force India that he was able to serve his five-second penalty in the pits without losing his position.

Had there been a championship at stake perhaps Hamilton would have tried it. As a five-second penalty is the standard tariff for such a move, it’s surely only a matter of time before someone gives it a go.

As it was Hamilton couldn’t stay close enough to attempt a pass. And there was nothing to be gained from trying to stay out longer than his team mate – he tried that two years ago on Nico Rosberg.

On lap 30 Hamilton locked up and ran wide at turn 17, giving Bottas some breathing space again. On the 49th tour Bottas slipped up, running fractionally wide at the turn five chicane, bringing Hamilton within range. But again it was only temporary, and as he watched his team mate edge clear again Hamilton finally threw in the towel.

“Are you sure you’re supposed to be there?”

Behind them Vettel had a lonely cruise to third place. He hadn’t been under threat from Ricciardo before the Red Bull driver dropped out on lap 21 with a hydraulic failure, the latest in a string of technical problems which ruined his end to the year.

Kimi Raikkonen saw off an attempt by Max Verstappen to undercut him at the first round of pit stops. Verstappen cursed a fumbled gear-change on his out-lap. He spent the rest of the race distance starting at the SF70-H, unable to attempt a pass even as Raikkonen backed off in the braking zones to save fuel.

Hulkenberg collected sixth ahead of a distinctly unimpressed Perez. Next came Esteban Ocon who, notwithstanding the occasional animosity between the Force India pair, had also got on the radio to report Hulkenberg’s corner-cutting at the start. He ran a long first stint in an attempt to do what few achieved on Sunday: Gain a position from a rival at Yas Marina.

One driver who succeeded was Fernando Alonso. He and Felipe Massa renewed their battle from Brazil but this time it was Alonso who triumphed over his retiring rival. He pounced on Massa after the Williams left the pits, and despite a 10kph straight-line speed deficit he stayed ahead to the flag.

Massa took the final point in his final race, and even followed the Mercedes drivers to the start/finish line where they were performing doughnuts. “Are you sure you’re supposed to be there?” asked Rob Smedley on the radio after Massa was congratulated by his son and wife.

Another driver who overcame the difficulties of passing at Yas Marina was Romain Grosjean. After a couple of failed attempts he stuck a move on Lance Stroll for 13th. Later in the race pulled off an improbable pass on Nico Hulkenberg to briefly re-take a place from the Renault at turn one, before he was inevitably re-passed in a DRS zone.

He took the chequered flag 50 seconds ahead of the next car, driven by Stoffel Vandoorne. The McLaren driver was carrying damage, yet despite his poor pace was able to keep a five-car train comprising Kevin Magnussen, Pascal Wehrlein, Brendon Hartley, Pierre Gasly and Marcus Ericsson behind for 15 laps until the finish. Stroll followed a further eight seconds behind after a miserable race featuring no fewer than three pit stops.

Carlos Sainz Jnr was the only other driver who didn’t see the chequered flag after Renault failed to attached his front-left wheel correctly following his lap 32 pit stop.

The chequered flag fell on the 2017 season with fireworks at Yas Marina. As usual, these were only of the literal kind.

But as Bottas admitted afterwards, his win was a well-timed end to a difficult second half of the season. It will allow him to head into the winter break with renewed confidence.

After the fanfare of the podium ceremony Formula One’s new owners took the opportunity to reveal a revised logo as part of a major overhaul of the sport’s branding for next year. It was immediately met with predictable derision from fans on social media.

The disappointing end to the season was a reminder the sport is in need of much deeper changes than a new logo.