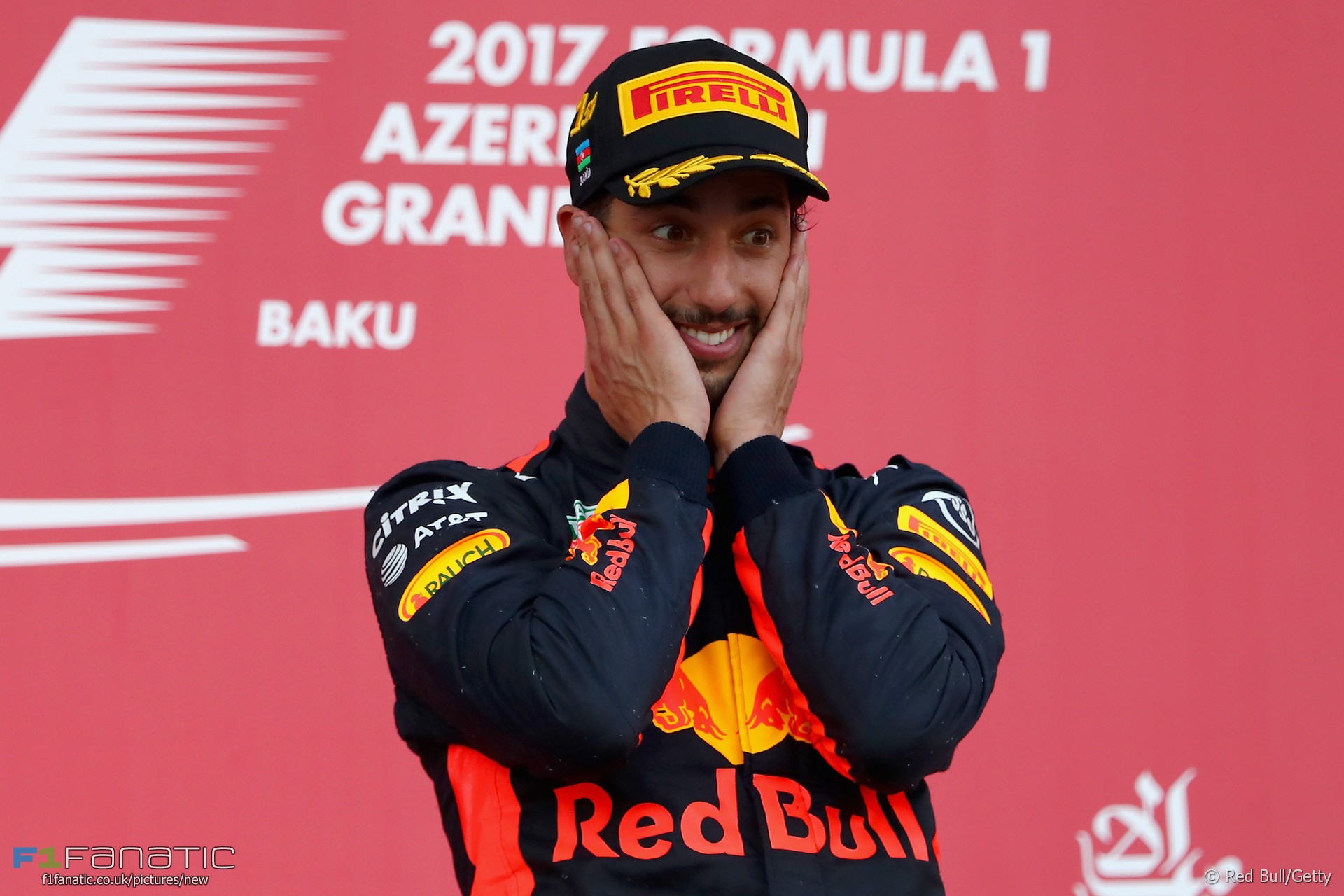 Daniel Ricciardo scored more points than team mate Max Verstappen this year despite having more race-ending technical failures. So how can it possibly be fair to rank Verstappen ahead of him?

Both Red Bull drivers suffered poor reliability during 2017, especially from their (TAG Heuer-branded) Renault power units. Verstappen endured an excruciating series of mid-season retirements while Ricciardo almost needn’t have bothered showing up for the final races. His third retirement in four races in Abu Dhabi cost him fourth in the championship to Kimi Raikkonen.

Better then than earlier in the season, however. In Baku it was Verstappen’s car who failed while he was running in front of Ricciardo, who went on to take his sole win of the year at the track.

The two Red Bulls were on track together for less than half of the 1,196 racing laps in 2017. As the pair scored most of their points when the other car didn’t reach the chequered flag the points difference is a poor basis for comparison.

Ricciardo had a difficult start to the year. He crashed in qualifying at his home race and next time out was beaten by Verstappen despite his team mate starting 11 places behind him. This was one of just seven occasions the pair saw the chequered flag in the same race. Ricciardo only came out on two of those occasions and in Monaco he was fortunate to jump ahead of Verstappen thanks to his strategy.

However Ricciardo was more than capable of holding his own against the rising star in the other half of the Red Bull garage. The qualifying margins between the pair were often razor-thin, and seven times Ricciardo came out on top.

And while Verstappen has deservedly been praised for his wheel-to-wheel racing, Ricciardo produced some of the season’s most memorable moves. His pass on Kimi Raikkonen at Monza was extraordinary, as were his late-braking moves as he carved through the pack at Interlagos.

He was also very consistent, often getting in among the Ferraris to grab podium finishes when his car held up. He took his ninth in Japan and surely would have hit double figures had his car ran better in the final four races. He still ended the year with more than Raikkonen.

Ricciardo is a top-class driver but he also has a top-class team mate. In 2017 Verstappen was a little bit too good for him and it appears the vagaries of Red Bull’s reliability meant that wasn’t reflected in the final points tally. With a more reliable and competitive car next year this rivalry will surely remain one of F1’s biggest talking points.

It can’t be easy being team-mates to Max Verstappen, what with the media frenzy and his performances on track, but Ricciardo has carried on regardless this year, racking up podiums and even a win. That he has more podiums and wins than Raikkonen’s Ferrari despite more retirements is a sign of his consistency, which is an interesting compliment to Verstappen’s “all or nothing” approach. Clever, but still stunningly fast, Ricciardo won’t let Verstappen have it all his own way just yet.
@Ben-n

What’s your verdict on Daniel Ricciardo’s 2017 season? Which drivers do you feel he performed better or worse than him? Have your say in the comments.