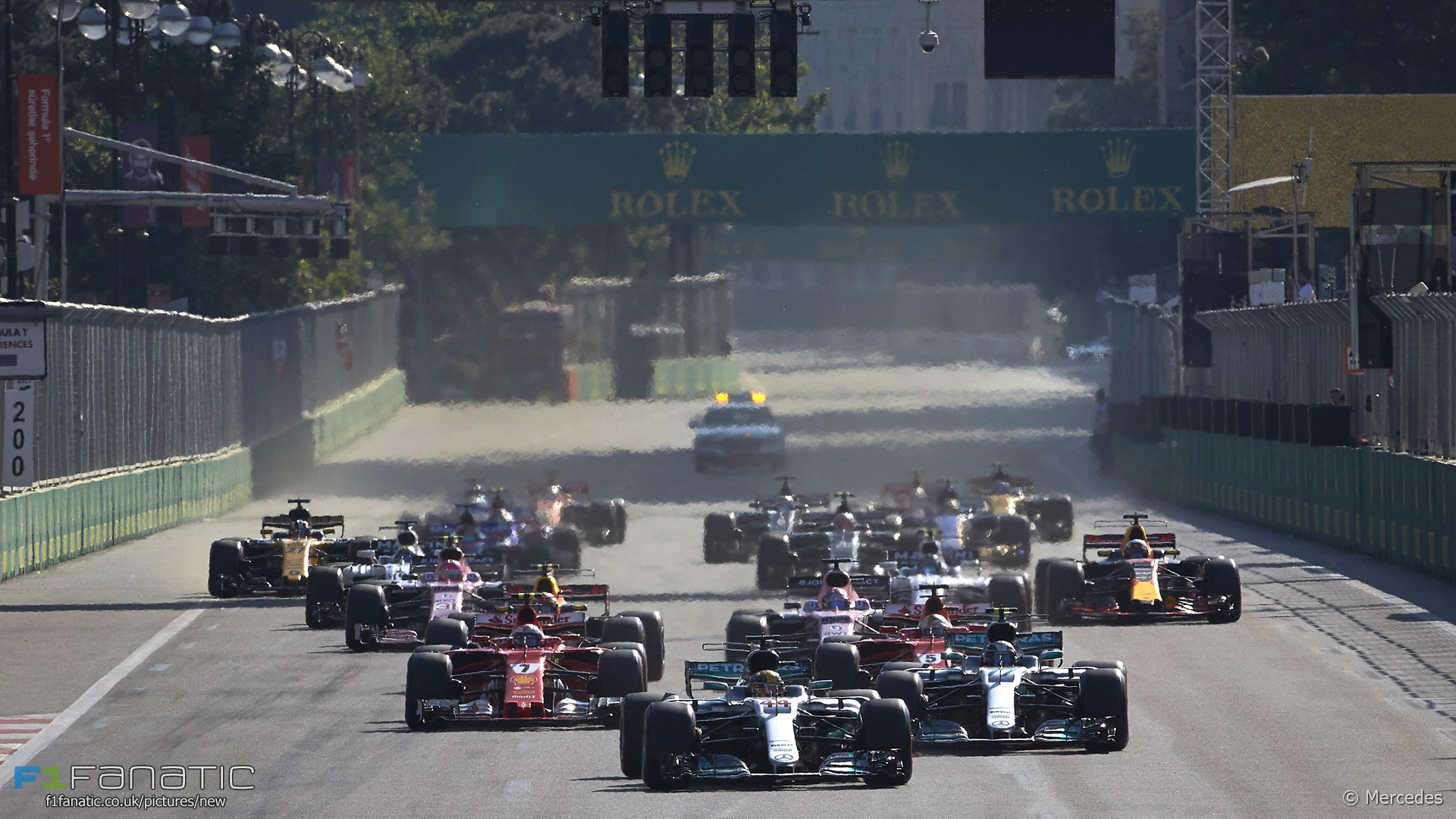 No one managed to go from last place to first during a race in 2017 but one driver came close. Here are the ten best charges through the field we saw in 2017.

The Red Bulls should have lined up second and third on the grid at Monza, the RB13s reaping the benefit of a rain-hit qualifying session. But having expected this would be one of their weakest venues the team had already decided to fit new power unit components to both cars, incurring grid penalties. Daniel Ricciardo therefore lined up 16th, three places behind his team mate.

Max Verstappen made up five places on the first lap alone but then tangled with Felipe Massa, incurring a puncture and dropping to the tail of the field. Meanwhile Ricciardo was making steady progress. Still only 15th at the end of lap one, he passed a car on average every lap until, by the seventh tour, he had demoted Kevin Magnussen for ninth place.

Ricciardo didn’t gain another place until Kimi Raikkonen made his pit stop. The Red Bull driver, who had started on the harder soft tyres, stayed out much longer than his Ferrari rival. By lap 40 the pair were disputing fourth place, Ricciardo with the advantage of fresher tyres.

Approaching the Rettifilio chicane, with a huge distance between the two cars, Ricciardo launched his Red Bull down the inside. Raikkonen saw him coming and allowed his rival just enough room to make the audacious pass stick. Ricciardo took the chequered flag in fourth place.

Verstappen took the chequered flag at the Circuit of the Americas 13 places higher than he started, but was stripped of the final place he had gained. His move on Raikkonen at turn 17 was bold and audacious, but also clearly completed out of bounds. A five-second penalty dropped him from fourth to third.

This meant a fine recovery drive ended in controversy. Verstappen had started 16th due to a power unit penalty, gained two places on the first lap and then scythed through the pack.

He was helped by an aggressive tyre strategy which moved him back onto a set of super-soft tyres for the final stint, allowing him to attack Valtteri Bottas and then Raikkonen.

In China Verstappen also started 16th and finished third, but this time he was allowed to go on the rostrum. Again technical problems were to blame for his lowly qualifying position. But having started 11 places behind Ricciardo the pair were separated by just three cars at the end of a storming first lap by Verstappen.

This was the best start of the year: Verstappen ended lap one nine places higher than he had begun it. It was a stunning display of his driving prowess on a damp circuit.

He now had the leaders in sight. Next Verstappen swept around the outside of Raikkonen at turn seven, and shortly afterwards he demoted his team mate too. He was on course for second place until a lock-up at the hairpin allowed Sebastian Vettel by. Nonetheless Verstappen clinch a podium finish which had seemed very unlikely 24 hours earlier.

Twice during 2017 Vettel had his race compromised by a first-lap tangle with a rival. In Canada he tangled with Verstappen, losing part of his front wing and falling to last place.

The Ferrari had the grunt to pass the midfielders with ease. He also passed Raikkonen with little difficulty, his team mate struggling with a brake-by-wire problem having gone off earlier in the race.

But Vettel had to work harder as the big points positions came within reach. The hard-fighting Force Indias proved difficult to separate, but he split them with an audacious move on Esteban Ocon. Sergio Perez fell next, though Vettel ran out of time to catch Ricciardo for third.

Ricciardo looked in good shape as he was on the pace in a rain-hit qualifying session at Silverstone. Then he suffered yet another Renault power unit problem.

Nonetheless from 19th on the grid, and despite throwing five places away by going off on lap five, he climbed an impressive 14 places at a track where overtaking isn’t always straightforward.

The tyre problems which hit the Ferraris late in the race handed him one position, but he had to fight for the rest. This was one of four occasions during 2017 where Ricciardo finished at least 11 places higher than the lowest position he had run in during a race. No wonder he also made the most overtaking moves of any driver this year.

As in Canada, Vettel tangled with a rival at the start in Mexico which left him with a lot of work to do. This time it was title rival Lewis Hamilton he clashed with, and the pair ended lap two at the rear of the field.

Hamilton had suffered the greater setback and went on to finish ninth. Vettel pressed on in pursuit of an unlikely top two finish which could keep his title hopes alive.

By lap 25 he had passed most of the midfield. His next target was Fernando Alonso, who fought hard in his McLaren, but eventually the Ferrari found a way by.

A Virtual Safety Car period handed Vettel the chance to switch back to ultra-soft tyres, giving him a further edge in his pursuit of the podium. But once he’d cleared the Force Indias he was told just how far ahead his team mate was in third place.

“Oh mamma mia,” Vettel replied. “That’s a little bit too much.” It had been a great recovery drive but the championship was gone.

If Vettel had been the architect of his own problems in Canada and Mexico, in Malaysia the blame rested with his team. Power unit failure on Saturday meant he lined up last at Sepang.

He made up one place before the race began when his team mate’s car was pushed off the grid. He had to do the rest himself, and got off to a great start by ending lap one in 13th place.

As in Mexico he took a few laps to find a way past Alonso. After that several drivers in front of him headed for the pits, so that by lap 13 he was up to sixth place. He demoted an unwell Sergio Perez for fifth and an off-form Bottas yielded fourth. That meant a race which started badly for Vettel ended with just one car between him and his title rival.

It was as if once Vettel had shown he could start last and finish fourth, the driver who beat him to the championship felt he had to prove he could do the same. To widespread astonishment, Hamilton binned his Mercedes in Q1 and had to start the Brazilian Grand Prix from the Interlagos pit lane.

Not being on the grid cost Hamilton an immediately opportunity to gain places on lap one. Fortunately for him a series of crashes eliminated three cars and brought out the Safety Car. When it came in he was already up to 14th and had lost little time to the leaders.

Inevitably the Mercedes W08 made light work of the cars ahead. He gained five places in four laps, then moved past Nico Hulkenberg and Sergio Perez for seventh. The latter was the first driver to offer the Mercedes anything more than token resistance.

To claim a Vettel-matching fourth place, Hamilton had to pass Max Verstappen. The pair were the two drivers who were overtaken fewer times than anyone else on the grid during 2017. But on this occasion Hamilton was able to pass Verstappen, whose Red Bull wasn’t working well. He then put Raikkonen under pressure for third but ran out of time – and tyre life – before he could put a move on the Ferrari.

It says everything about how chaotic the Azerbaijan Grand Prix was that the drivers who finished first and second had been as low as 17th and 20th at different points in the race. And once again Ricciardo was among the drivers who made the most progress.

A crash in qualifying left him tenth on the grid. His situation became more challenging soon after the start when rising brake temperatures forced him to make an early pit stop, dropping the Red Bull to 17th place.

A series of collisions and incidents ahead prompted a series of Safety Car periods and a red flag. Hamilton and Vettel had clashed behind the Safety Car, leading to the latter receiving a penalty while Hamilton was forced into the pits when his headrest failed.

Ricciardo appeared behind them on lap 24 with a brilliant pass on three cars at once at the end of Baku’s long run to turn one. Another dazzling display of late braking took him past Lance Stroll, Felipe Massa and Nico Hulkenberg. It ultimately won him the race.

Bottas started second and finished there in Azerbaijan. Not much to get excited about?

Hardly. Bottas snatched his second place by one-tenth of a second from Lance Stroll, who he passed as they crossed the finishing line. And 44 laps earlier he was still 20th and stone last.

Bottas ended up at the back of the field following a first-lap tangle with Raikkonen which left him with a puncture. In between the various Safety Car interruptions he found time to haul himself back into podium contention.

Of course it helped that he had the best car of the year and Baku is a track which suits the Mercedes particularly well. But while no one managed to go from last to first in 2017, Bottas was the driver who came closest.

Just outside the top 10

All the drivers in the top 10 enjoyed the advantage of driving the most competitive cars in the field. However a couple of drivers in the midfield almost did well enough to gain a place on this list.

Carlos Sainz Jnr twice made up 11 places during the course of a race. A brave gamble on slick tyres in China saw him climb from 18th to finish seventh. He held fifth at one point before inevitably being passed by a Ferrari and a Mercedes. Sainz also emerged from the Baku chaos with a good result, rising from a low of 19th to take eighth.

The only other driver not in a ‘big three’ car to make up 11 places during a race was Sergio Perez. The Force India driver took an excellent seventh in Bahrain from 18th on the grid, passing his team mate on the way.

Two other drivers also made up 11 places in a race: Ricciardo in Brazil (17th to sixth) and Hamilton in Mexico (20th to ninth).

Which of these recovery drives impressed you the most? Have your say in the comments.