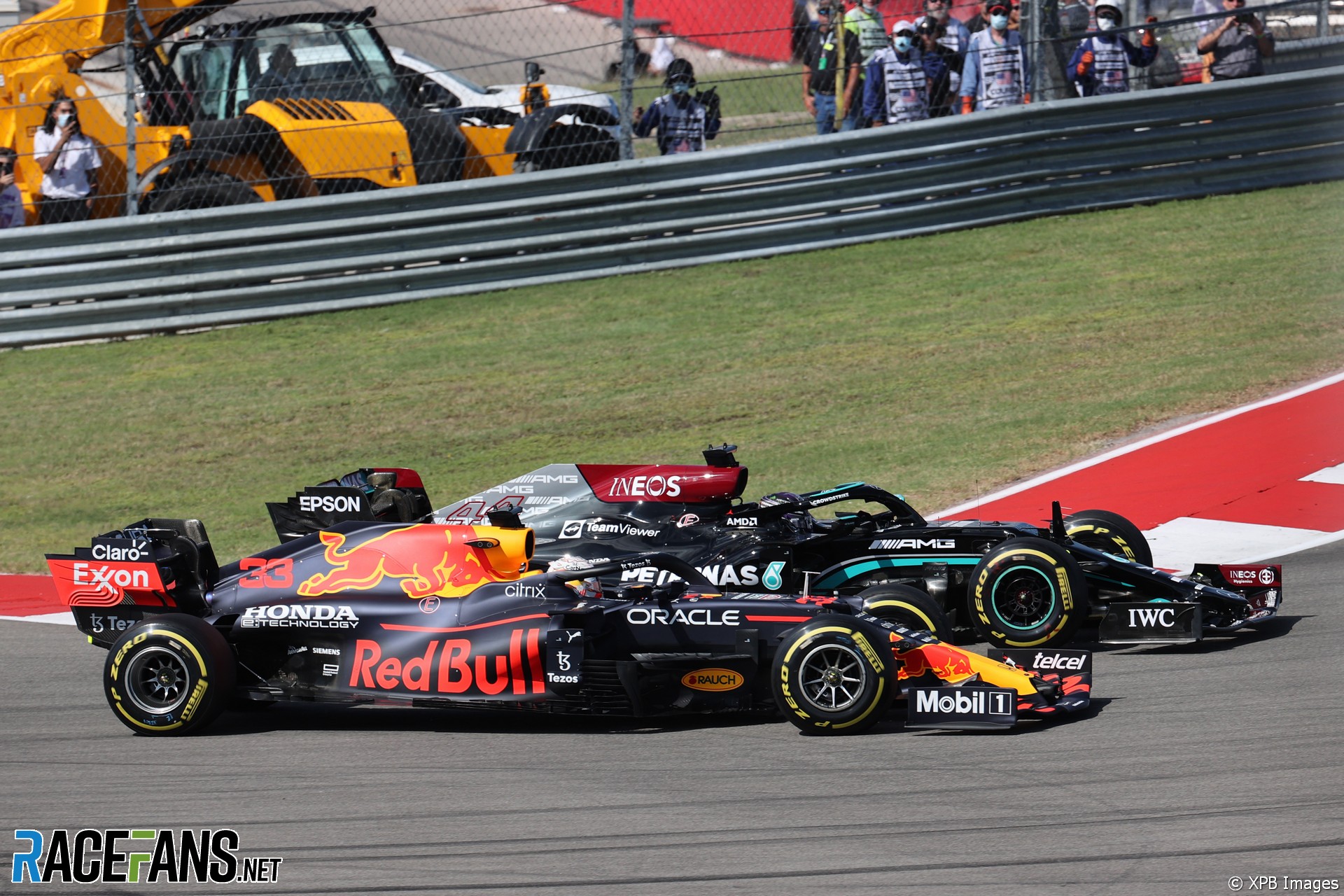 Formula 1’s championship contenders Lewis Hamilton and Max Verstappen have already been forced to take grid place penalties for exceeding their quota of power unit elements this year. Further penalties could yet decide the destiny of this year’s world championship.

Their Mercedes and Red Bull team mates have also taken power unit grid penalties, as have many other drivers. Each car is allowed to use three examples each of their internal combustion engines, MGU-H, MGU-K and turbochargers, plus two each of their batteries and control electronics units. In addition, from 2021 a rule was introduced to limit the number of exhaust systems used per year to eight per car, after which grid penalties would apply as with the other components.

Of the Mercedes and Red Bull drivers, Bottas has used six new internal combustion engines, twice the number permitted per season, and has taken grid drops in three of the last four races as a result. Max Verstappen, Sergio Perez and Lewis Hamilton have only used four.

If a driver exceeds the limit with more than one element, they get a stiffer penalty. So while some drivers have had to start at the back of the grid for changing multiple parts in one weekend, Hamilton took a single, 10-place grid drop in Turkey because Mercedes decided to only go beyond his allocation on one component: the internal combustion engine. The team have been chasing a reliability problem on this area of the car, which is why Bottas has got through so much hardware.

But at a time when the fight between the contenders is nail-bitingly close, power unit penalties which send one of them to the back of the grid can be an unwelcome distraction from the competition.

As Formula 1’s race director Michael Masi points out, the teams have to work within the framework of the regulations in this respect as in all others.

“They all know from the start of the year how many power units, how many gearboxes, how many various elements – exhausts, et cetera they’re going to have,” said Masi. “So everyone’s on the same level of understanding of what they need to do.

“Any team – particularly in the championship fight, but anyone – you’re always going to try and get as much of a competitive advantage you need, be it power unit updates, aerodynamic updates, gearbox, whatever it might be.”

Whatever rules framework is put in place, teams will inevitably try to work it to their maximum advantage, such as by tactically taking penalties at circuits where overtaking is easier than others.

“We’ve seen that it depends on each team’s strategy, reliability, what they’re playing with, what they’re doing,” said Masi. “So I know that’s a choice that they all make.”

Formula 1 has relaxed its penalties system since its V6 hybrid turbo power units were introduced in 2014. Previously drivers were given larger grid drops and, if they could not serve them all in a race, they were converted into time penalties in the race potentially as serious as a race-ruining 10-second stop-and-go. A similar system is still used in Formula E.

Another undesirable feature of F1’s penalty system is that teams can blamelessly incur grid drops. Verstappen and Perez both lost power units to crash damage (Verstappen at Silverstone and Perez in Hungary) during collisions with, respectively, Hamilton and Bottas.

The impact of these penalties can vary from track to track. Perez recovered to eighth place from a back of grid start in Zandvoort, after taking a full replacement Honda power unit. Verstappen went from last to second in Sochi.

Similarly Bottas started at the back in Monza but finished third, whereas he could only rise from ninth to sixth last time out. Hamilton started 11th and finished fifth in Turkey.

The power unit penalties system exists to discourage teams from plugging fresh hardware into their cars every race at gigantic costs. F1 power units are therefore designed to perform for thousands of kilometres instead of a few hundred.

While the potential implications for the title fight are undesirable, the system is an effective deterrent to sky-rocketing engine expenditure according to Mercedes team principal Toto Wolff.

“The penalty system on power units is pretty robust because what we need to avoid is that we are building power units in a way that they perform at peak performance for only a few races,” he said.

“If you change the regulations and you say, okay, there is no grid penalty for the driver, but just constructors’ points, it will still mean that if you’re in a fight for a driver’s championship, you will just throw engines at the car.”

But if another idea could be devised Wolff believes “it’s definitely worth looking at it” as the current system is potentially confusing to new fans.

“Why, out of the driver’s responsibility, an engine penalty puts him at the back of the grid or ten or five places away? That’s clearly not great, but I haven’t got the solution.”

For all drivers who have received penalties so far, further sanctions will be less damaging from here on in. As was the case for Bottas in Austin, changing a single part for these drivers may only mean a five-place grid penalty.

However all will be anxious to avoid the double whammy of an in-race reliability failure, as happened to Hamilton in the latter stages of the 2016 championship fight. Not only would that hit their points total in that race, but fitting replacement parts for the following round would mean a further penalty.

But championships have been won and lost due to reliability problems in the past. F1’s power unit penalty structure is an extension of that, and no one has yet conjured up a superior alternative which would allow the series to keep a lid on development costs without potentially affecting the championship fight. In that respect, the penalties are a necessary evil.