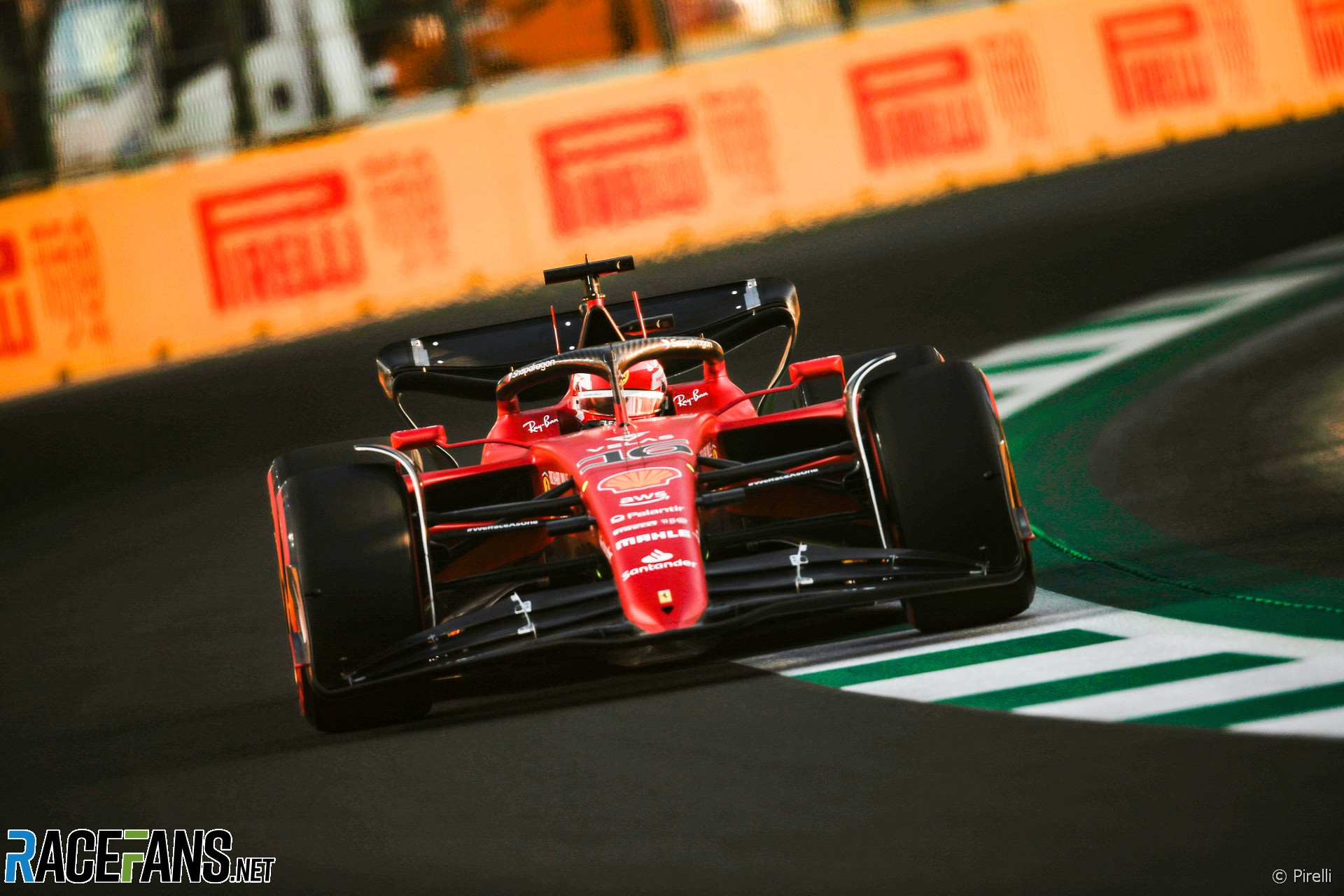 For a while on Friday night it seemed the practice times at Jeddah Corniche Circuit would be relegated to an obscure statistical footnote to a race which never happened.

However at the time of writing, despite the shock of a missile exploding a mere 10 kilometres from the track shortly after cars began lapping, all signs are the race weekend will continue as planned.

After winning the Bahrain Grand Prix with a one-two victory to start the 2022 season in perfect style, Ferrari and Charles Leclerc kicked off the Saudi Arabian Grand Prix weekend by topping both practice sessions to position themselves again as the early favourites for Sunday’s race.

It didn’t all go to plan, however. Two deceptively minor-looking brushes with the barriers for both Leclerc and team mate Carlos Sainz Jnr ultimately ended the Ferrari drivers’ second practice sessions early.

While the two F1-75s will be easily repaired in time for Saturday’s final practice, both Ferrari drivers will rue missing out on their only opportunity for meaningful high-fuel race simulation runs.

For the second weekend in a row, Friday’s evening session will be the only truly representative hour of running for the teams in which they can dial in their cars for Sunday’s race. The significantly cooler conditions after the sunset – track temperature fell by as much as 10C – made it paramount for teams to gain as much data from second practice as possible.

In comments issued by the team – all drivers’ media sessions were cancelled as the implications of the attack not far away from the track emerged – Leclerc accepted that it had been a “bit of a shame we couldn’t get the high fuel laps done.” However he remained confident Ferrari “should be in the mix” come qualifying on Saturday.

Among those who did log some longer runs on the medium tyre, there was little surprise as to who appeared to look the strongest. Max Verstappen put in the best seven-lap representative stint of the field, with an average lap time of a 1’35.502, just over a tenth of a second quicker than team mate Sergio Perez’s comparative run in the second Red Bull.

But despite being clearly the strongest of those who ran race simulations over the final phase of second practice, both Red Bull drivers remained cautious about their chances of overcoming the Ferraris on Sunday. Verstappen reckoned that Ferrari seemed “quite competitive again” after Leclerc topped both Friday sessions, while Perez predicted that qualifying would likely be “another straight shootout” between the two teams.

After clearly being behind their main rivals last weekend in Bahrain, Mercedes’ Friday pace seemed more promising than it did seven days earlier. With Lewis Hamilton’s average race sim lap time deficit just over half a second to Verstappen around the 27 corners of the Jeddah circuit, there was reason for Mercedes’ trackside engineering director, Andrew Shovlin, to feel somewhat more positive about the potential performance of the team’s W13.

“Compared to Bahrain, the car balance is in a better place and in terms of degradation we’re quite happy with what we have seen today,” said Shovlin. “Our single lap still needs a bit of work but we’ve got the session tomorrow to do that. Overall though, a reasonable day but clearly we still have a bit of work to do before we’ll be troubling Red Bull or Ferrari.”

For McLaren, who began the season in dismal form in Bahrain, there was also more reason for confidence at the end of the first day in Saudi Arabia. As well as ending the day in the ‘best of the rest’ sport of seventh, Lando Norris’s long run lap times were also encouraging, faster than Esteban Ocon’s Alpine and only two tenths slower on average than Russell’s Mercedes.

“A few things [are] feeling a little bit better because of the type of track – much quicker and a lot smoother, so there are definitely some differences,” Norris explained. “We’re feeling a little bit more confident, but it’s all very close and we’re still lacking in many areas, so we’ll continue to work on some of the progress we’ve made, and see if we can get even more performance out of the car tomorrow.”

Once again, tyre performance and degradation looks like playing a big role in the outcome of this weekend’s grand prix. The C4 soft tyre is making its first appearance of the season in Jeddah, but Pirelli motorsport director Mario Isola believes that teams may aim to stay away from the red-walled tyre when it counts most.

“It’s hard to get an exact read on tyre performance as there was plenty of track evolution today, in FP1 and also in FP2, with sand blowing onto the track and the cars sliding around, especially at the start of each session,” Isola explained.

“We’ve seen the majority of long runs on the medium tyre, which the teams probably consider to be a strong race tyre along with the hard, which showed plenty of consistency. The soft is probably less suited to this circuit as the graining will lead to increased degradation, but it’s only Friday and we’re yet to see the full picture this weekend.”

The three compounds are closer in performance in Jeddah than the slightly harder trio of tyres used last weekend. Pirelli say the hard compound is nine tenths of a second a lap slower than the mediums, with the soft six tenths a lap faster than the mediums. That could make track position even more desirable, especially if there’s a high chance of Safety Car interventions throughout the 50 laps of the race.

But before then, qualifying comes first. While the race pace of the Ferraris remains unclear, their one lap pace has looked strong over these opening two rounds. However, while Leclerc went fastest of all on Friday, Verstappen’s early mistake on his sole push lap on the soft tyres midway through the session prevented Red Bull from showing their hand.

Expect Perez’s predictions of a “shootout” on Saturday to come to fruition. But after that, the likely outcome of the second Saudi Arabian Grand Prix becomes much harder to call.

Become an RaceFans Supporter today and browse the site ad-free. Sign up or find out more via the links below: