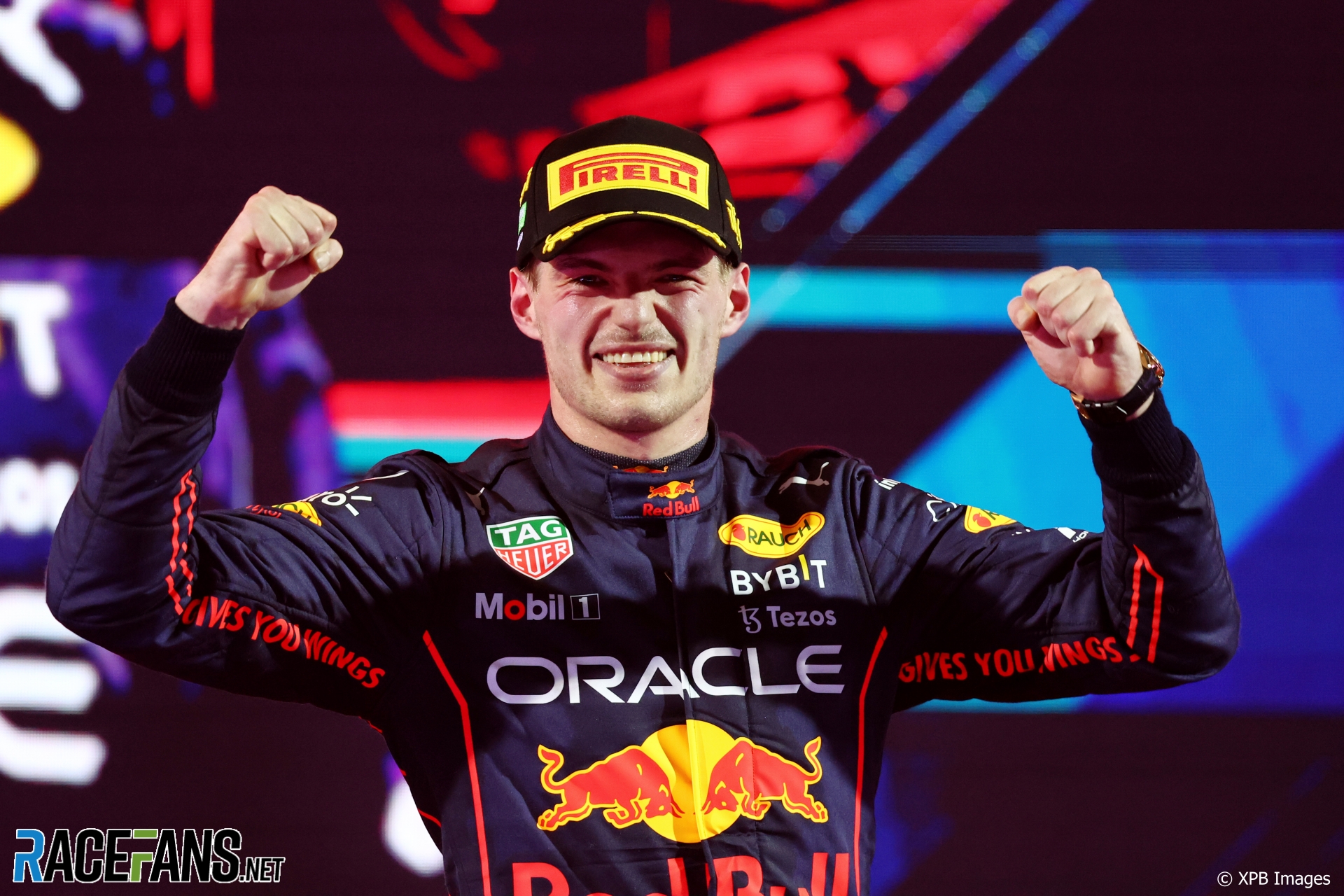 Max Verstappen held on to beat Charles Leclerc to victory at the Saudi Arabian Grand Prix following a dramatic late race battle between the pair.

The world champion passed Leclerc after a multi-lap duel in the closing laps before holding off the Ferrari to win by half a second at the finish. Carlos Sainz Jnr took third, with Sergio Perez finishing fourth in the second Red Bull.

When the lights went out, Perez led the two Ferraris of Leclerc and Sainz onto the run to the first corner. Zhou Guanyu fell to the back of the field after falling into anti-stall when he bounced over the sausage kerb at the apex of the first turn, while Verstappen muscled his way past Sainz to take third place as his team mate pulled a lead of just over a second by the end of the first lap.

Esteban Ocon had held onto fifth place at the start, but was passed by George Russell’s Mercedes at turn 13 in the early laps. He then came under intense pressure for sixth from his team mate, Fernando Alonso. Ocon shut the door on Alonso as his team mate attempted to slipstream past him down the pit straight.

The two Alpines engaged in a fierce multi-lap duel, trading sixth position several times, before Alonso was eventually able to take the place and stay ahead, while Valtteri Bottas began to pressure the pair of them behind.

As the pit stop window for the medium tyre runners opened on lap 15, Ferrari told Leclerc to pit and undercut the race leader. Red Bull immediately responded and brought Perez in first to cover off the attempt, as Leclerc continued out on the track.

As Perez rejoined the circuit with the hard tyres, the yellow flags suddenly flew as Nicholas Latifi had crashed his Williams exiting the final corner. The Virtual Safety Car was deployed, allowing Leclerc, Verstappen and Sainz to all come into the pits as the field slowed.

That enabled Leclerc to keep the lead after leaving the pitlane, with Verstappen promoted to second place. Sainz exited the pitlane with Perez rounding turn one. Despite crossing the Safety Car line after the Ferrari, Perez took third from Sainz as the pair began to catch the leaders under the now full Safety Car conditions.

At the restart, Leclerc led away from Verstappen as, behind them, Perez blended out of the throttle exiting turn three and allowing Sainz to retake third place.

With the entire field now either on new hard tyres on still on the hard tyres they started the race on, Leclerc and Verstappen began to gradually pull away out front just as they had the previous weekend in Bahrain.

On lap 39, Alonso began slowing in the Alpine with his steering wheel dashboard informing him to “cool the car”. Then, Daniel Ricciardo’s McLaren slowed to a crawl exiting the final hairpin before coming to rest just before the pit entry. The Virtual Safety Car was deployed for several laps as both cars were recovered.

The race resumed with nine laps remaining, with Leclerc only just ahead of Verstappen. As the pair rounded turn 26, Leclerc backed off to allow Verstappen through before the DRS detection zone, allowing the Ferrari to use the device to repass the Red Bull along the main straight.

After more close battling between the pair – including both drivers coming close to a stop before the DRS detection zone – Verstappen eventually passed the Ferrari along the pit straight. While Leclerc stayed close to the Red Bull, Verstappen was able to hold on to take the chequered flag by half a second from the Ferrari, who added an extra point to his 18 for second place with the fastest lap.

Kevin Magnussen and Lewis Hamilton rounded out the points in ninth and tenth, respectively, the latter glumly asking “is there even a point for that position?”

After the chequered flag, Sainz, Magnussen and Perez were all announced to be under investigation by the stewards for allegedly failing to slow under yellow flags over the final two laps, after a late collision between Lance Stroll and Alex Albon.

Long before the start of the race, Yuki Tsunoda was struck with a problem on his AlphaTauri during his reconnaissance lap to the grid. Coupled with Mick Schumacher’s withdrawal yesterday, that left only 18 cars to line up on the grid for the second race of the 2022 season.