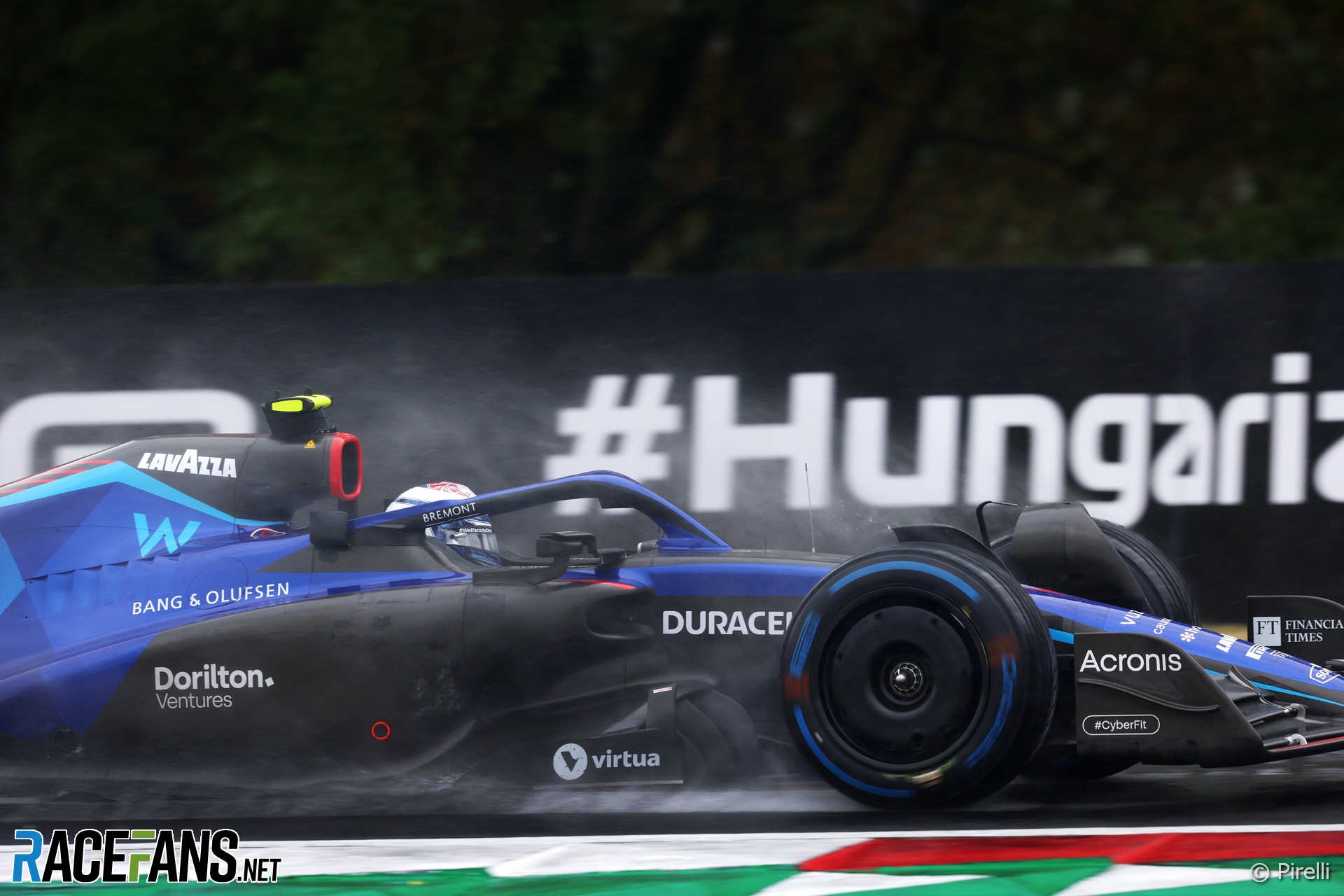 Nicholas Latifi went fastest overall in the dying moments of a wet third practice session at the Hungaroring.

The Williams driver beat Charles Leclerc’s previous benchmark time by six tenths of a second quicker on his final lap on a drying track, putting him on top in a practice session fastest for the first time in his F1 career. Latifi’s team mate Alexander Albon was third, one place ahead of Max Verstappen.

The promised heavy rain for Saturday arrived over the Hungaroring just 45 minutes before the third and final practice session was due to begin. Unsurprisingly, the track was soaked when the green light appeared at the end of the pitlane, but there was no active rain falling as the session began.

Drivers were in no rush to take to the treacherous track, until the two Ferraris of Leclerc and Carlos Sainz Jnr ventured out, both on the wet tyres. Eventually more cars trickled onto the track, Fernando Alonso taking the unique decision to head out on intermediate tyres.

Leclerc was the quickest car on the sodden surface in the early minutes of the session, ahead of team mate Sainz. Alonso was as high as third fastest on his intermediate tyres before the two Aston Martins of Sebastian Vettel and Lance Stroll beat his best time by a matter of tenths on their wet tyres.

With the rain picking up again, the level of water on track increased. Alonso abandoned his intermediate tyre run and returned to the pits. Only the two Alfa Romeos, two Williams and Yuki Tsunoda’s AlphaTauri continued to circulate on the heavily wet track. Gradually cars returned to the pits until only the two Haas of Kevin Magnussen and Mick Schumacher remained.

Around halfway into the session, the rain had started to ease off again. That prompted more cars out on the track, including Lewis Hamilton, who headed out onto the track for the first time in the hour. Drivers began to improve for the first time since the early runs, with Sebastian Vettel moving to second in the times in the Aston Martin.

The track was still difficult, however, with Pierre Gasly having a 360-degree spin exiting the chicane in the middle sector before continuing. George Russell headed out on the track on intermediates, but abandoned his run after complaining of a lack of grip.

As the track began to slowly dry, drivers all switched to the intermediate tyres for the final 20 minutes as they grew more confident with the grip levels. However, the water on track still required respect as Leclerc found out when he spun his car through a full rotation on the exit of turn three – fortunately avoiding the barriers.

Russell slipped off the track under braking for turn 12 but continued, while Verstappen complained about the lack of grip he was finding from the intermediates. But Vettel was struggling more than Verstappen for grip and, with nine minutes remaining, the Aston Martin driver lost the rear of his car entering turn ten, skidding into the outside tyre barrier.

The session was stopped with the red flags while the Aston Martin was freed out of the gravel trap. After a delay of a few minutes, the session restarted with just under four minutes remaining. The majority of the field chose to head back out for a handful of laps before qualifying, with the track as dry as it had been for the final hour. Leclerc and Verstappen both improved on their final efforts, with Leclerc a full second faster than the Red Bull to lower his own personal best time.

That appeared to settle matters, until Nicholas Latifi suddenly began setting purple sector times in the Williams on his final lap. Latifi crossed the line to set a 1’41.480, which was quick enough to see him jump right to the top of the times, over six tenths faster than Leclerc. Latifi’s team mate Alexander Albon also improved dramatically and jumped to third position, nine tenths behind Latifi.

The chequered flag flew and ensured that Latifi finished top of an official timed Formula 1 session for the first time in his career. Leclerc ended the hour in second, with Albon third and Verstappen in fourth, over a second slower than Leclerc’s Ferrari. Russell was fifth for Mercedes, ahead of Alonso, Sainz and Norris.

Despite crashing out, Vettel sat ninth in the timings at the chequered flag. Magnussen was the last of the top 10, one place ahead of Hamilton.