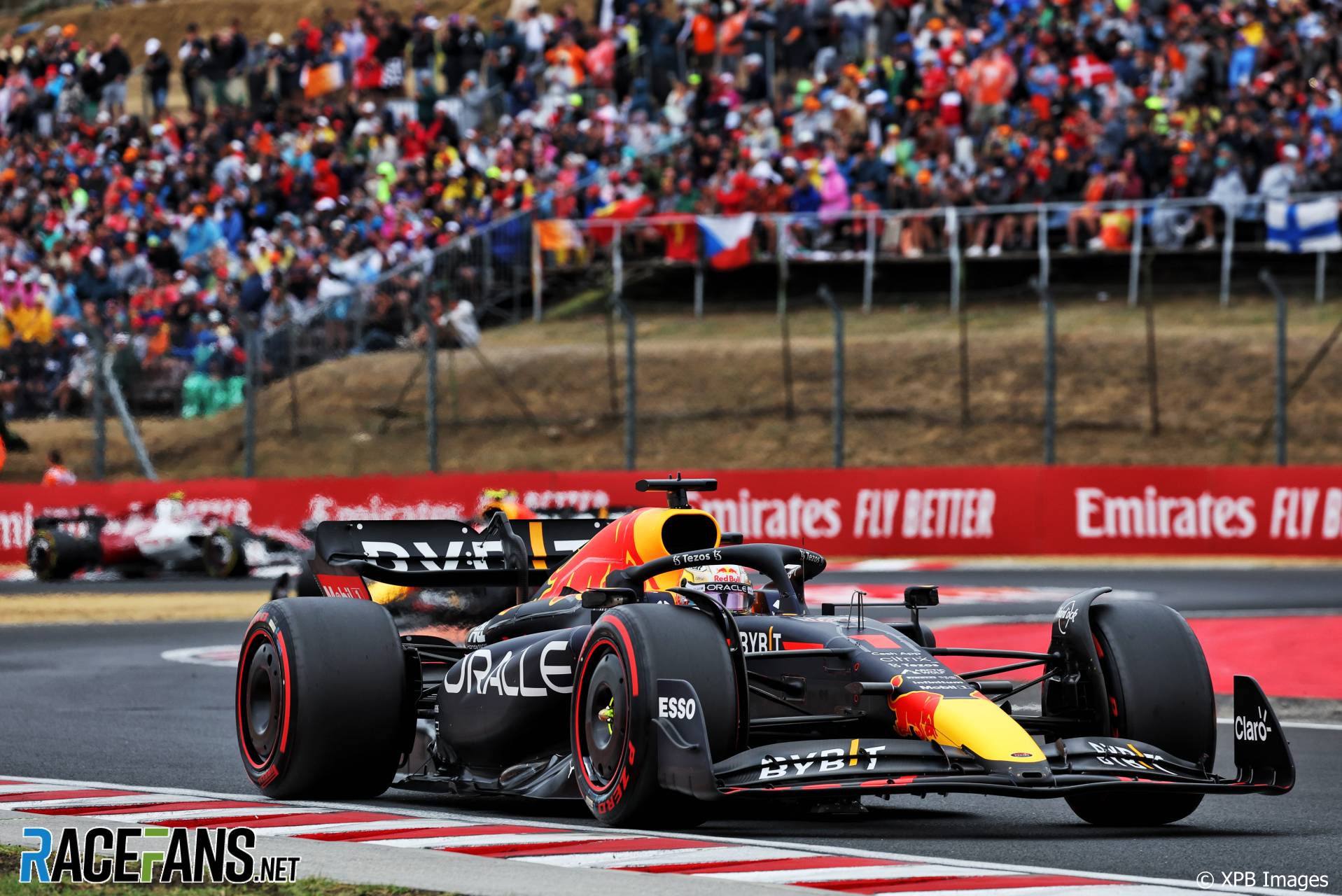 Max Verstappen recovered from 10th on the grid to win the Hungarian Grand Prix despite a mid-race spin as Ferrari failed to finish on the podium.

Verstappen successfully undercut Carlos Sainz Jnr and George Russell on his final pit stop, before passing Charles Leclerc twice on-track to take the lead of the race. Lewis Hamilton passed Russell late in the race to take second, with Russell completing another double podium for Mercedes.

Sainz finished fourth, while Leclerc fell to sixth place after pitting for soft tyres inside the final 20 laps.

After earlier rain had left the circuit wet, the track was dry as the field prepared for the formation lap. However, it began to spit lightly with rain over the grid in the minutes before the green lights, only inflating the tension prior to the start.

Russell opted to start on the soft tyres, while the Ferraris of Sainz and Leclerc chose the medium tyres for the first stint. When the lights went out, Russell kept ahead of Sainz but the Ferrari made a look for the lead around the outside of turn one. However, Russell held firm to retain the lead.

In the pack, Sebastian Vettel and Alex Albon made contact through turn two, causing damage to the Williams’ front wing and leaving debris on the circuit. The Virtual Safety Car was deployed to allow the debris to be cleared, while Albon was shown the black-and-orange mechanical flag, obliging him to pit for repairs and dropping him to the very back.

The green flag was shown shortly after, with Russell safely out of DRS range of the Ferraris behind. Further back, Kevin Magnussen was called into the pits having also received a black-and-orange flag for front wing endplate damage which was sustained through contact with Daniel Ricciardo at the start.

Having started from 10th and 11th on the grid, the Red Bulls of Verstappen and Sergio Perez began to make progress through the field on their soft tyres, passing both Alpines of Estaban Ocon and Fernando Alonso to move into sixth and seventh.

On lap 12, Hamilton used DRS along the pit straight to take fourth place off Lando Norris into turn one, with Verstappen quickly following the Mercedes by the McLaren and into fifth. The next lap, Norris lost a third spot when he was passed by Perez on the approach to turn one.

With Norris losing pace, McLaren opted to pit him for medium tyres at the end of lap 14. Out front, Russell was beginning to struggle with rear tyre wear and slowly fell back into the clutches of the Ferraris. With Sainz within DRS range on lap 16, Mercedes called Russell into the pits for medium tyres. Russell rejoined in sixth, between the two Alpines.

Leclerc had stayed out and taken the lead and when he eventually pitted for a second set of mediums at the end of lap 21, he rejoined behind Russell in second having successfully jumped team mate Sainz. Russell’s lead sat at around two seconds, but Leclerc gradually reduced the gap until getting within DRS range by lap 27.

A half-hearted look into turn one did not pay off for Leclerc, but Russell was visibly struggling to match the pace of the Ferrari. As they began lap 31, Leclerc had his best run on the Mercedes of the race, and dived around the outside of the leader entering turn one to move into the lead of the race.

Russell fell back from Leclerc to within DRS range of Sainz behind. Verstappen in fourth was also catching the pair of them and got to within a second before Verstappen pitted for mediums at the end of lap 39. Leader Leclerc and Russell both pitted on the next lap, with Leclerc switching to hard tyres. However, Verstappen’s out-lap was so strong he beat Russell out of the pit lane to move into a next second place.

With softer tyres, Verstappen caught up to the back of Leclerc ahead and easily passed the Ferrari along the pit straight to jump into the net lead of the race for the first time. However, at the end of the lap, Verstappen lost control of his car under throttle on the exit of turn 13, spinning through 360 degrees and managing to continue, although having dropped behind Leclerc.

Verstappen regained the ground he lost to Leclerc and eventually repassed the Ferrari to re-take the net lead of the race out of the first corner. Sainz eventually pitted at the end of lap 48 for soft tyres, rejoining in fifth behind Russell and handing the lead to Hamilton who was the only leading driver yet to make a second stop.

Hamilton eventually pitted on lap 51, taking a set of soft tyres for the final 19 laps and emerging behind Sainz in fourth. That promoted Verstappen into the overall lead of the race for the first time, while Leclerc behind was coming under increased pressure from Russell on his medium tyres.

Russell passed Leclerc for second place on lap 54, with Ferrari opting to bring Leclerc in for a third pit stop at the end of the lap. He rejoined in sixth place on the soft tyres, over half a minute adrift of leader Verstappen.

Hamilton used his fresher soft tyres to catch up to the back of Sainz in third, eventually slipstreaming by the Ferrari along the pit straight to take the final podium place. Hamilton then caught up to the back of team mate Russell in second, passing his team mate into turn one to move into second.

Light drizzle began to fall in the closing laps. With four laps remaining, Valtteri Bottas pulled off the track at turn 11 reporting a loss of power. That brought out a Virtual Safety Car to allow the Alfa Romeo to be cleared.

The rain began falling harder as the race resumed with just over a lap remaining, but Verstappen managed to tip-toe his way around the final tour and take the chequered flag to complete a remarkable recovery from tenth to win by over eight seconds from Hamilton in second, with Russell completing a double podium for Mercedes.

Sainz finished fourth, with Perez holding onto fifth place by four tenths from Leclerc in sixth. Lando Norris finished a minute behind the Ferrari in seventh, ahead of the two Alpines of Alonso and Ocon. Sebastian Vettel claimed the final point in tenth after a late race battle with team mate Lance Stroll.