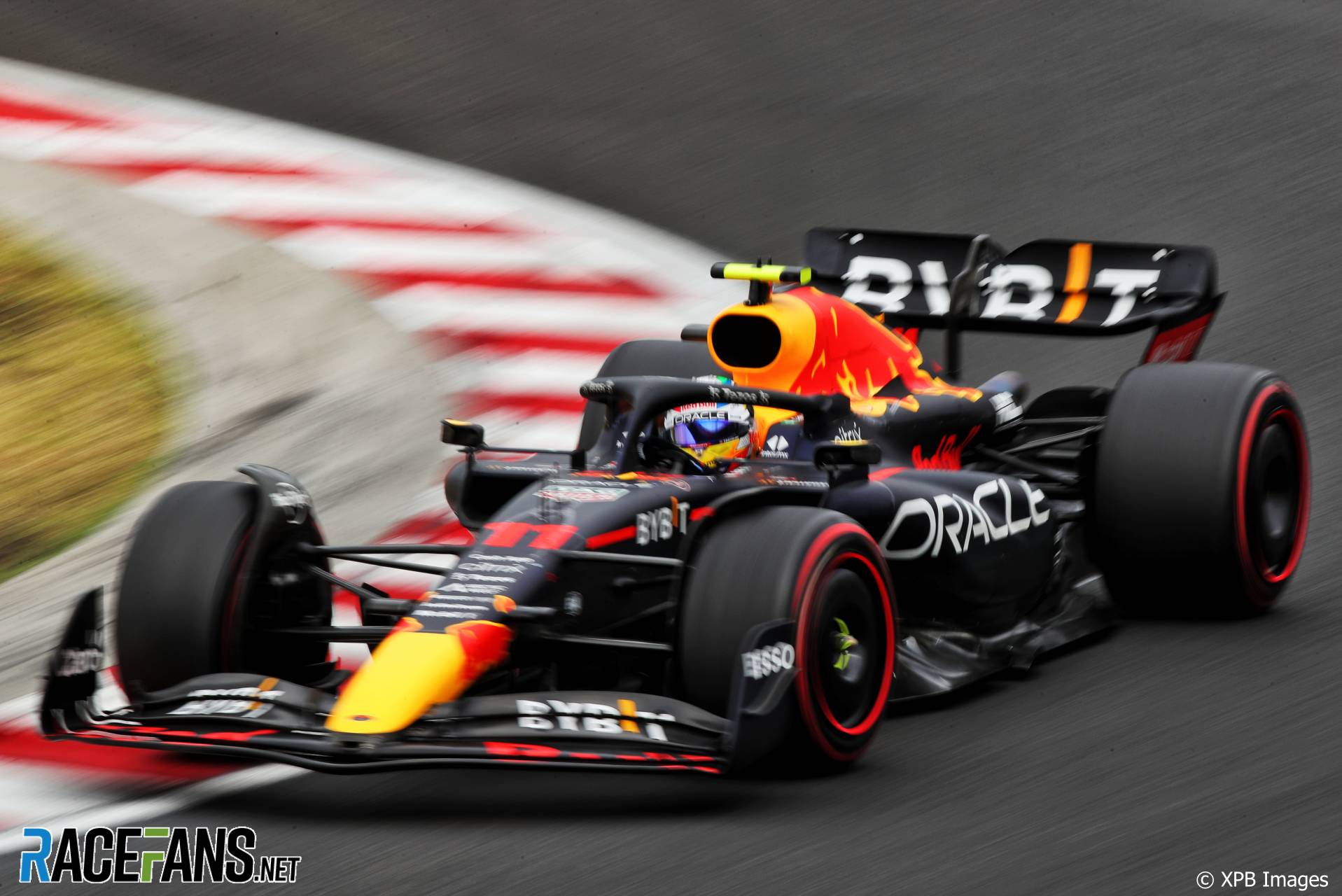 In the round-up: Sergio Perez believed going from eleventh to third in Hungary was possible were it not for a late-race neutralisation.

Could Perez have matched Verstappen’s charge?

Red Bull had a lot of work to do with their two cars starting 10th and 11th for the Hungarian Grand Prix, but Max Verstappen was able to climb nine places to win. His team mate Sergio Perez rose into fifth place a few laps after Verstappen took the lead, but then he made no further progress.

Once those who would finish ahead ahead had pitted, Perez had a 15.4-second gap to a podium result to make up during his final stint, and he had closed that down to 5.3s prior to a two-lap Virtual Safety Car period. Green flag action resumed on the race’s last lap, leaving him with little time to reduce the gap further and he ended up finishing fifth.

“On the second stint, we were looking to do the one-stop,” he explained. “So we didn’t push as hard, and just towards the end I think we had pretty good pace, especially under this cold, cold weather. But unfortunately I just missed out on the podium. George and Carlos was within a couple of seconds. I think without the VSC it would have been a lot closer.”

Haas’s drivers were not impressed with Pirelli’s hard compound tyre available at the Hungarian GP, with both using it during the race and only returning negative feedback.

“I think at some point it felt like it [was possible to score], but then we put on the C2 [hard tyre] and things changed pretty quickly,” said Mick Schumacher. “That C2 just didn’t work for us, especially the rear tyres. It never really seemed to switch on, and therefore we kind of tried to go off it and then go on to the C3. The last three laps were tough.

“I was hoping that the tyre would improve at some point, but it just never did. So it felt like ice in the rear for most part of the stint, really. And then I put the medium on and everything felt a lot better.”

His team mate Kevin Magnussen expected Haas to be stronger in the race than qualifying but was proven wrong. “The hards didn’t work, couldn’t switch them on,” he said. “So I was driving around on cold tyres and then we swapped to medium. It was a bit better, but mostly the pace wasn’t there in the race so we’ve got to try to understand why.”

Paretta Autosport back on IndyCar grid with new sponsor

The female-led and Ed Carpenter Racing-supported Paretta Autosport outfit, makes its third and last planned appearance in IndyCar this year on the streets of Nashville this weekend, has announced Acumatica as its new title sponsor.

The cloud software company brings funding to the car driven by Simona de Silverstro, who contested the team’s first two races this year and finished them in 21st and 18th.

AlphaTauri driver Pierre Gasly says Formula 1’s ever-growing schedule has put him off getting a dog.

Following rumours F1 CEO Stefano Domenicali intends to put a record-breaking 24 races on the 2023 F1 calendar, Gasly admitted he is reconsidering his plans.

“Based on what Stefano is planning for us next year with 25 races, I’m not sure,” he said in Hungary. “The dog is getting lower down the list in the priority list. I’m still negotiating with my family to get one for themselves, But then I think for me, my personal life will not. Otherwise I’ll need to get a pass like Roscoe [Lewis Hamilton’s pet dog] got. For now I’m saying it’s not my priority.”

When @OscarPiastri won the F2 title last year I was a bit frustrated he didn't have a drive so shouted on the commentary "F1 sign him up" I didn't mean *every* team.

I had to double check it’s not 1st of April 😳

#OTD in 2021, the FIA brought an end to over 70 years of motorsport history as Formula 3 as a contemporary single-seater category became no more.

BRDC British F3 rebranded to @GB3Championship in the middle of its season, starting a new era for the serieshttps://t.co/FMH1Q3plWK

Changes made for IndyCar's return to Nashville (Racer)

'To reduce the likelihood of the traffic jams and multi-car crashes that caused mayhem during restarts at the inaugural event, restarts have been moved from the stretch between turns 11 and one – in front of Nissan Stadium – to the long straight exiting the Korean Veterans Bridge that feeds into turn nine which served as the zone where the 2021 race was started.'

'I was happy with our pace in qualifying, but the red flag was timed poorly for us and that was disappointing.'

'Johnson, 46, is still searching for his first IndyCar win and heads into the Music City Grand Prix with more momentum than he had in his rookie season in 2021. After that he will consider a possible return to NASCAR.'

'The Scot, from Oban, made it all the way from kart racing as a child with Lewis Hamilton, to test driving for Williams in Formula 1. But knowing she was unlikely to progress further in the sport, she called time and started looking for a new challenge.'

'I can’t see any issue,' Ben Sulayem said. 'When we talk about F1 or any other discipline of the FIA, that is F1 or F2 or F3, or even Formula E, we talk a lot about diversity.'

James Coulee thinks there’s a Porsche-focused logic in Red Bull’s announcement that they will continue to have Honda support for their self-branded powertrains until the end of 2025, when Porsche is anticipated to become Red Bull’s engine supplier.

Though I understand Porsche is more than capable of developing an F1 engine on their own, they may prefer to have Red Bull Powertrains as a starting point:

– it’s more economically interesting as neither new facilities need to be developed nor a new team assembled (as their current teams and facilities will continue with their current programs, as far as I know);
– Red Bull Powertrains has specific F1 engine expertise (particularly regarding its personnel but also its tools) that Porsche doesn’t currently have;
– Porsche’s engine development doesn’t have to start from scratch, with better economical and sporting results for sure (we just need to remember Honda’s difficulties when trying to go down that path).
James Coulee