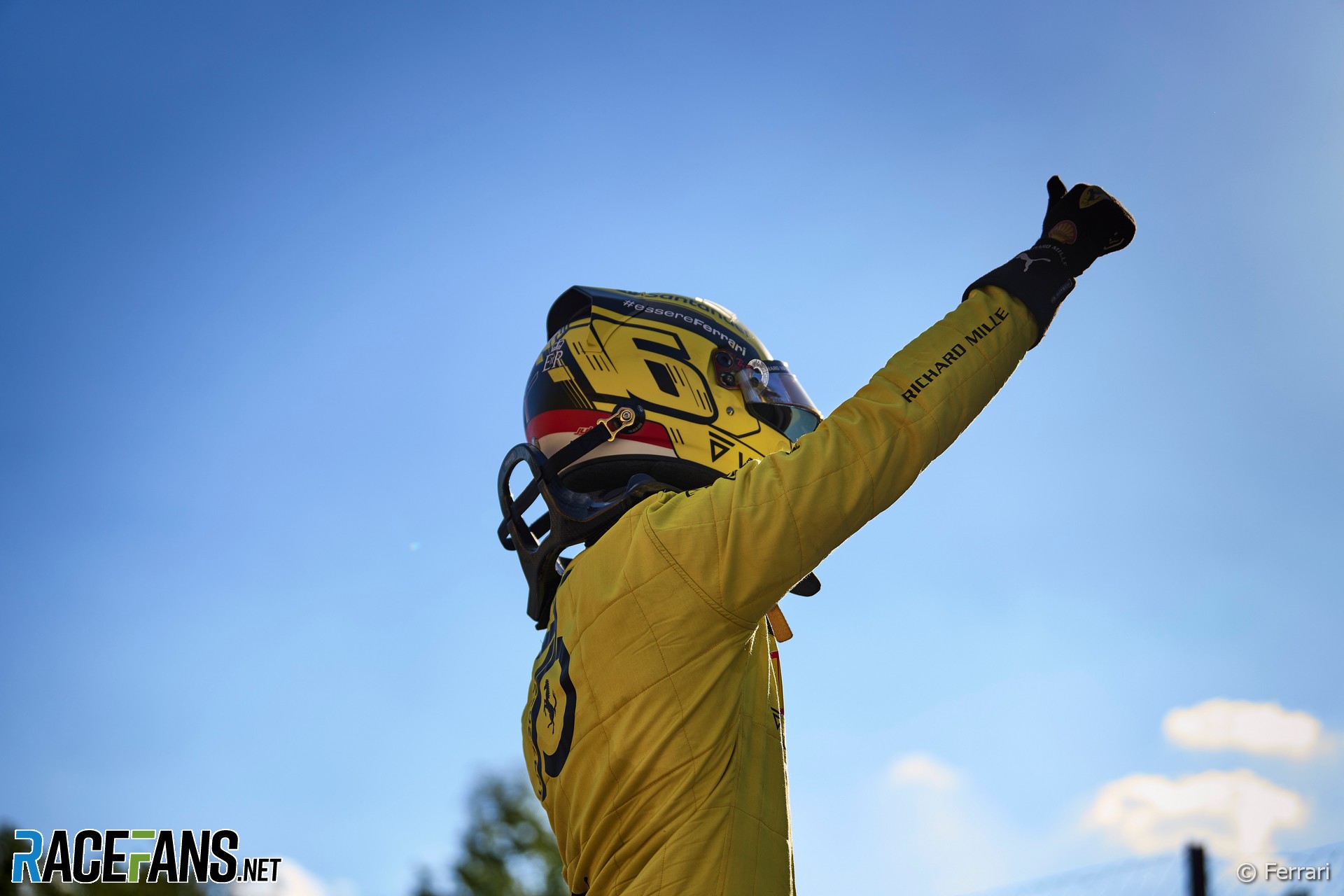 Charles Leclerc did not need to put himself under intense pressure in qualifying at Monza in order to secure the most advantageous starting position on the grid and, with it, the best possible chance of victory heading into the Italian Grand Prix.

With the majority of his rivals already doomed to drop significantly further back from wherever they ended up on Saturday, this was certainly the least challenging of the eight pole positions that the Ferrari driver had secured in 2022. However, Leclerc’s roar of delight at beating Max Verstappen to being fastest in qualifying demonstrated just how important securing that moral victory over their rivals was to the Scuderia.

The titles may be all but decided in Red Bull’s favour, but that will only make a Ferrari win at Monza all the more imperative – not just for the Tifosi watching expectantly from the grandstands, but to avoid another blow to the morale of the team and its drivers. It was little surprise Leclerc was so pleased to earn pole on merit.

“We still need to finalise this tomorrow, otherwise it’s pointless to do the pole on Saturday,” the pole winner said. “But it is a very good surprise today, considering where we come from, especially in Spa.

“We were not expecting to fight for pole here. So it’s a very good surprise at home. There’s a special motivation for this weekend and it’s great that we managed to do a good job today.”

With Verstappen’s relatively minor five-place grid penalty, Leclerc has effectively secured a 48-metre head start in what will surely be a straight fight between the two over 53 laps of Monza. Despite Verstappen being on unstoppable form in recent rounds, Leclerc – decked out in commemorative Modena yellow for the 75th anniversary of Ferrari – is confident he can give his team even more reasons to celebrate at the end of the weekend.

“I think the race pace is strong, the feeling was really, really good,” he said. “So, whatever happens in the first lap, I think we still have the pace to win this race, so we’ll try to put everything together, no mistakes during the race and I think we can have a good Sunday.”

The theme throughout the season so far has been that Red Bull are unbeatable at circuits where top speed is critical. From Jeddah way back in March to Spa just two weeks ago, where Verstappen won from as far down as 14th on the grid, Verstappen has made a habit of breezing past Leclerc down a straight on his way to victory around the faster circuits on the calendar.

Nowhere else on the calendar demands a low downforce setup quite as strongly as Monza – the fastest circuit in terms of average lap speed in the championship. So with Red Bull’s slippery, low-drag car making it the perfect match for Monza, it would be easy to assume that the team would simply trim their wings to make the most of their advantage and give Verstappen a boost as he made he way past his rivals.

However, they ended up going a different route, cranking more wing angle on the car before qualifying. But despite flying against conventional wisdom, Verstappen is convinced Red Bull have made the wisest choice.

“We chose, of course, the downforce level a bit higher, compared to some other cars,” Verstappen said, “but it felt alright.”

“Of course, you know around here qualifying to race can always feel a bit different and my race runs, they felt really good, so very happy with that pace. So, I’m actually really looking forward to the race tomorrow.”

With Verstappen demoted to seventh, George Russell inherits a front row start despite only ending qualifying sixth quickest, milliseconds behind team mate Hamilton. Russell was under no illusion that he would be in with a fighting chance of securing Mercedes’ first win of the season and fully expects Verstappen to keep his streak of wins well and truly alive, but he also anticipates Hamilton, Carlos Sainz Jnr and Sergio Perez all being able to join him during the race despite starting from the lower end of the field.

“There’s three drivers from three front teams all on their own and their team mates right at the back of the grid,” Russell explained. “So we will be in kind of two separate races.

“Those guys should be slicing through the field very quickly and if there’s a Safety Car midway through the race or whatever, they’ll be in the fight as well, if it’s timed perfectly. But I’m sure they’ll be on an offset strategy as well, so there’s still no reason that those three are out of the race because we’ve seen a few Virtual Safety Cars, a few Safety Cars, that can easily play into other people’s favour.”

Asked what he could achieve from down in 18th on the grid, Sainz had to admit he couldn’t be sure whether he could emulate his Paul Ricard recovery and reached the top five.

“I’m going to push, obviously, flat-out from the beginning, try to make as many positions at the start, and just get to the front as quick as possible,” Sainz said. “Because then, if there’s a Safety Car or anything, then anything can happen around Monza.

“I think it’s going to be a very mixed race, there’s a lot of cars out of position. So there’s going to be a lot of battles during the whole race. Where can I get to? I wish top five like in France would be a good result. But given how quick the Mercedes are lately, is going to be a bit more tricky.”

As ever, the Italian Grand Prix is shaping up to be a one-stop race with little to be gained from trying an extra stint due to the hefty loss of time through the pit lane due to the extreme speeds out on track. Pirelli predict that an opening stint on the soft tyres before switching to the hards will be the most effective strategy, but those starting out of position near the back of the field could try to run softer compounds near the end of the race to make their progress up the order easier.

But while Perez, Sainz and Hamilton will all be trying to slipstream their way through the field, Leclerc knows he will have an almighty challenge to keep ahead of Verstappen and secure his second visit to the top of the famous Monza podium. But if he succeeds, it could well be his best victory of his career so far – and a much needed boost for his team.

“It’s not going to be easy because for sure Max will be extremely quick and will be coming back,” Leclerc said. “But I’m sure that we can make this work.”

Will Ferrari stop Verstappen winning his fifth grand prix in a row? After wins for Daniel Ricciardo and Pierre Gasly in the last two years, will Monza serve up another surprise?

Share your views on the Italian Grand Prix in the comments.