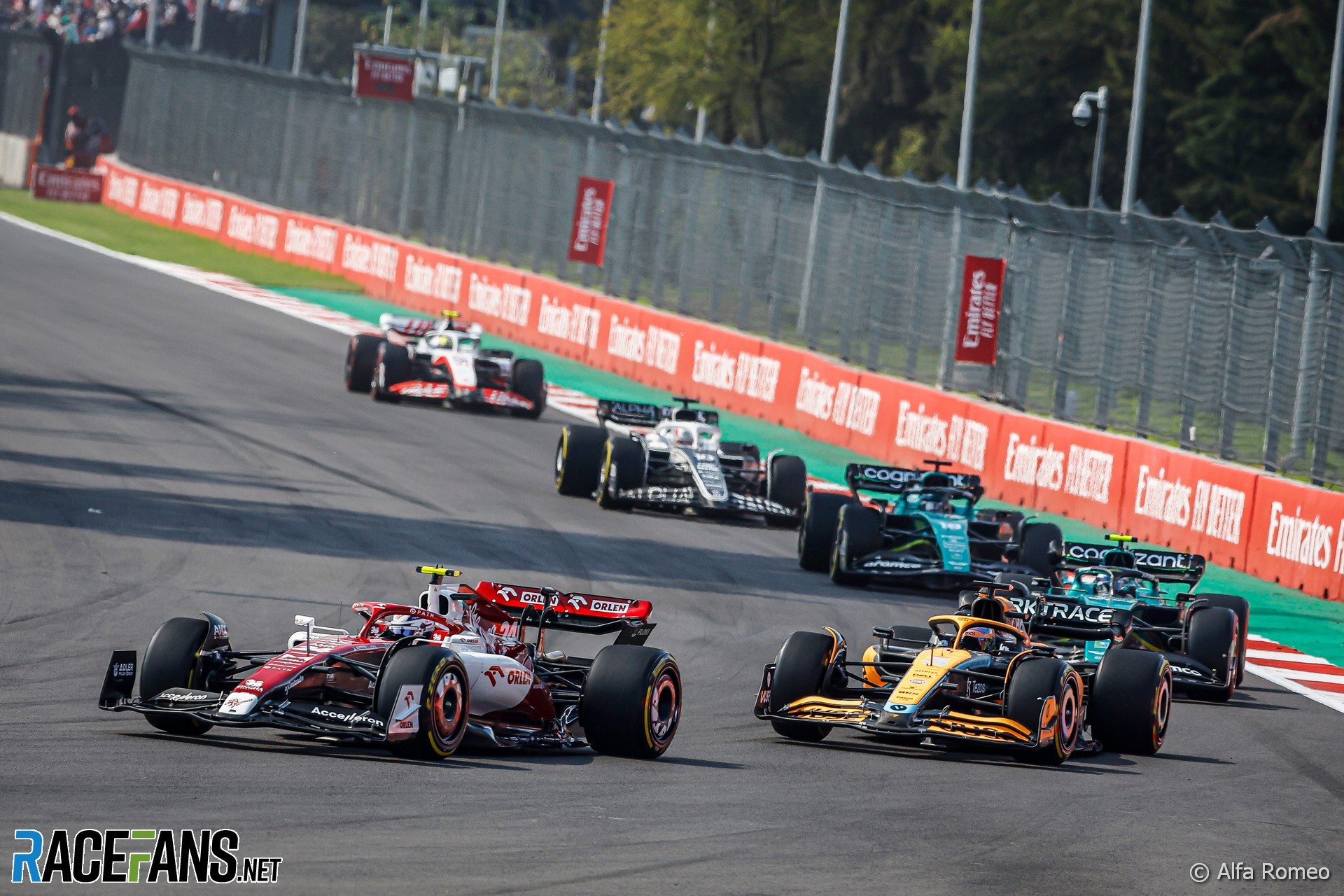 In the round-up: Zhou Guanyu says he played the team game to help Alfa Romeo take a point in Mexico.

Zhou “tried to play the team game” in Mexican GP

Zhou qualified 12th and finished 13th in the Mexican Grand Prix, but his latest non-score may have proven beneficial for Alfa Romeo as team mate Valtteri Bottas scored his first point in 11 races. The rookie revealed he compromised his own race to try to support Bottas, who qualified sixth and finished tenth.

“I tried to play the team game, and I had a good stint in the mid-part with the medium,” said Zhou. “It was going well and then after I tried to give Valtteri some positions with the Alpine, which I was happy to compromise a little bit my race,” he said.

“But it was a bit frustrating in the end because I was so close to being ahead of this DRS train and unfortunately stuck behind and then it was hard to overtake them.”

He explained that Alfa Romeo “tried to use me like slowing the pack down, which makes sense waiting for maybe a Safety Car window” and he thought it was “worth a gamble” when it looked unlikely he would be finishing out of the points-paying positions anyway.

The Mexican Grand Prix promoter claimed it attracted its highest-ever attendance of 395,902 over the three-day event. A total crowd of 145,934 was recorded on Sunday alone.

Marcus Ericsson spoke about the difficulty of moving from Formula 1 to IndyCar as he unveiled his face on the Borg-Warner Trophy, the silverware awarded to the winner of the Indianapolis 500 each year.

After five seasons in F1 with a best finish of eighth, Ericsson switched to IndyCar in 2019 and initially was also light on success. He claimed one podium in his first two seasons, won two races last year, and then was victorious in this year’s Indy 500.

“I wouldn’t say I underestimated IndyCar, but I thought I would be a bit stronger a bit earlier than I was,” he said. “My first two seasons were pretty tough, and the first year was really tough. I guess you could say the second year I thought I was sort of finding my way a little bit, but it was still a bigger challenge than I think I expected.

“But when you think about it, you’re up against guys who have been racing here for 10, 15, up to 20 years, and they know these cars and these tracks. You know naturally it’s going to take a bit of time to get on top of that.”

On his form over the past two seasons, both of which he has come sixth in, he added: “Years three and four here have been really, really strong for me, and I’ve been running up front. And this is a great series; I love it. It’s so competitive now with so many good cars and drivers, and you know every time you go out there it’s going to be a fight. I love racing in a series like that.”

'Lewis Hamilton was robbed. I think we should make that plain at the start of this column. I emphasise this because Christian Horner and Max Verstappen of Red Bull decided to boycott Sky Sports after one of their reporters used this word in relation to the finale of the 2021 season, after a controversial safety car restart in the last moments of the race.'

'F1 is a male-dominated sport, but there are growing calls to change the status quo. One of the women hoping to lead that charge is 19-year-old Abbi Pulling from Spalding, Lincolnshire. She's been impressing on the track in the W Series, and despite the final races in that tournament being pulled, she told BBC Newsbeat she's hopeful that she'll one day see a woman behind the wheel of an F1 car.'

'Further details of Oscar Piastri’s ongoing position within the Alpine F1 team are set to be decided in the coming days. The Australian has been notable in his absence from the track since the revelation that he would not drive for the Enstone operation in 2023 and would instead race for McLaren.'

'The departure of decade-long sponsor NTT Data to rival McLaren SP will not jeopardize Chip Ganassi Racing’s No. 10 Honda. Racer understands CGR, which has expected the change for some time, has a full roster of sponsors assembled that will be announced in the near future to replace NTT on the entry driven by 2021 series champion Alex Palou.'

'The convergence between British F4 and European series in 2022 made it easier for drivers to include it in double programmes. Alex Dunne did just that, and it meant he won the British title in a very odd way.'

For the avoidance of doubt my friend and colleague for the past 26 years @tedkravitz has my full support. Face to face dialogue is the only way to sort out issues and disputes in the relentless crucible of the F1 paddock. We all have opinions and different jobs to do, that’s life

Difficult to find any other way of describing the @fia departed #MichaelMassi decisions @AbuDhabiMedia 2021 as @LewisHamilton being robbed! Don’t blame @tedkravitz @SkySportsF1

Congrats Stoffel. What a great reinforcement and mega talent for the team. It will be a pleasure to work with you again. 🙏

At the Royal Automobile Club, what what. Mercedes AMG wins the 2022 Dewars trophy for this insane powertrain taken from F1 to a road car. In case you want an AMG ONE hypercar, you’re out of luck. The 275 units have all been sold at £2.4 million each pic.twitter.com/Vp8RRzFoDc

We’re with @karting at their Reading track today, welcoming 100 girls!

A new and exciting experience into the world of motorsport for a lot of these girls! #GirlsOnTrackUK pic.twitter.com/MxDfyhxPBQ

After finishing in the top 15 out of over 100 drivers last year, being back out with @GBRTeam_ will make it my fifth Hayes and every year we go back we do better than the year before, so top 10?😁 pic.twitter.com/XrjTGAbYJB

Para Karajan: “There’s no orchestra conductor in the world who would be able to replicate the melody of Ferrari 12-cylinders.” pic.twitter.com/ZCtwlkN7db

Red Bull refused to speak to Sky over the Mexican Grand Prix as the team was unhappy with a broadcast segment involving voiced by Ted Kravitz which referred to Lewis Hamilton being “robbed” of the 2021 world championship.

I think the point with Ted Kravitz in particular is that it’s not the first time he has thrown shade at Red Bull. The conspiracy theory that Yuki Tsunoda’s retirement at Zandvoort was engineered to help Verstappen win – and led to abuse and threats directed at Red Bull’s chief strategist – was voiced by Kravitz early on, without evidence, in a Sky broadcast.

I don’t think it’s a Red Bull thing in particular, I think Ted just likes the drama – he was also an advocate of the equally baseless conspiracy theory that Charles Leclerc deliberately crashed in qualifying for Monaco last year to guarantee himself pole position.
Red Andy