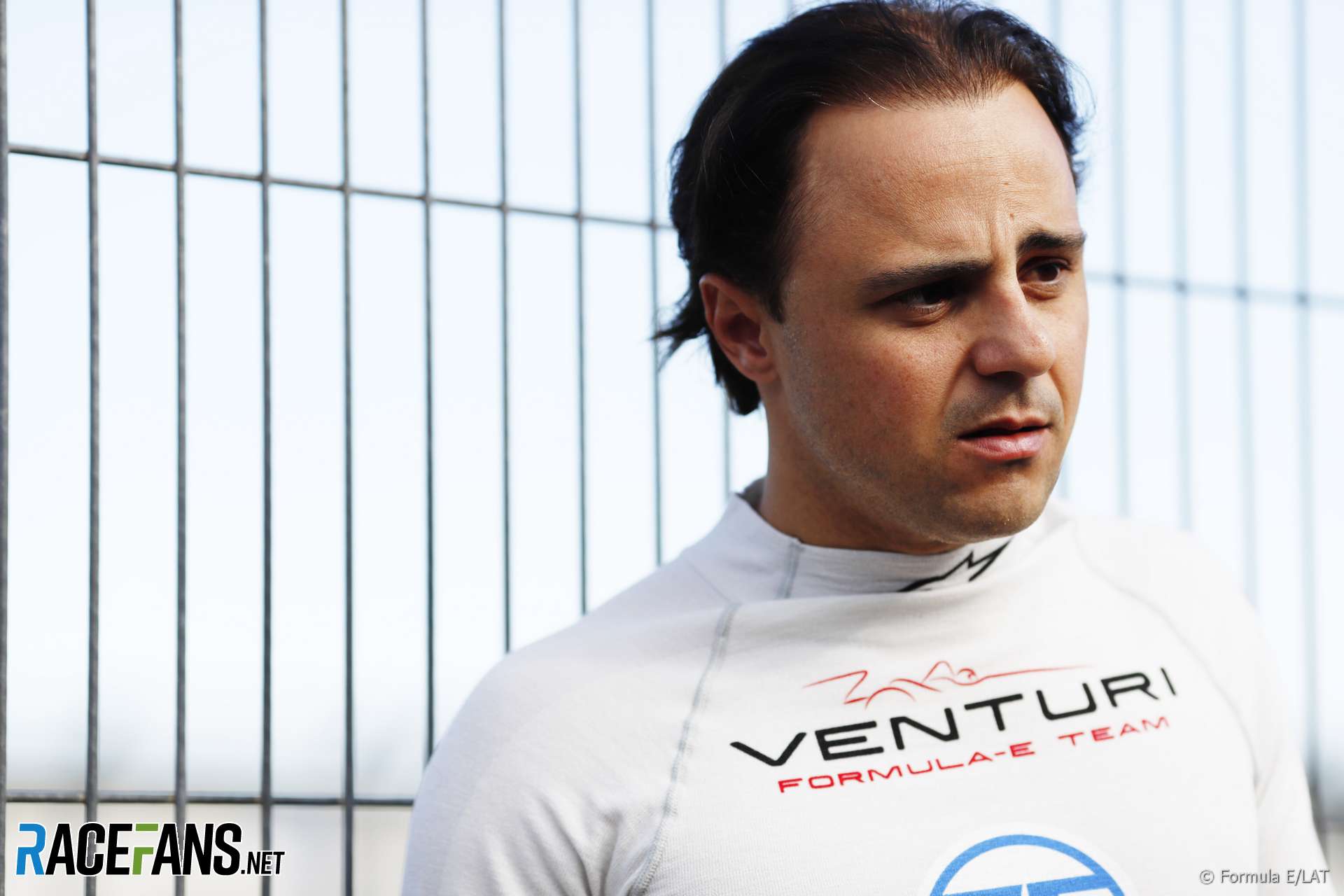 Felipe Massa narrowly lost the 2008 world championship to Lewis Hamilton despite winning the final race of the season on home ground in Brazil. Hamilton’s last-pass pass for fifth place denied Massa a crown his team briefly thought he had won.

It was a far cry from his hair-raising debut at Sauber six years which included flashes of speed and more than a few moments of youthful exuberance. He spent a year on the sidelines before returning in 2004 as a much more accomplished racer. Two years later he landed a place at Ferrari and became an F1 race-winner.

Massa arrived in F1 from Italian F3000 where he won the 2001 championship with six wins from eight races. The year before he clinched the Italian and European Formula Renault championships, taking the former despite missing two races.

Massa was the European Formula 3000 champion when Peter Sauber hired him for 2002 to replace McLaren-bound Kimi Raikkonen. An error-strewn first season for the 20-year-old culminated in a collision with Pedro de la Rosa at the Italian Grand Prix which earned him a one-race suspension. Sauber replaced him with Heinz-Harald Frentzen at the next round, a place Frentzen kept throughout 2003 while Massa spent a year on the sidelines.

However Massa had scored a major coup by landing a Ferrari testing deal for 2003 courtesy of his manager Nicolas Todt, son of Ferrari boss Jean Todt. Massa developed not only the car but also his driving style, modelling himself on Michael Schumacher who won his sixth championship that year with Ferrari.

Massa returned to Sauber in 2004 with a lot more polish in his driving and considerably better results along with it. He finished fourth at Spa after a memorable tussle with Juan Pablo Montoya, and qualified fourth at Shanghai and Interlagos in the closing stages of the season.

Although Massa was roundly beaten by more experienced team mate Giancarlo Fisichella, Massa remained with the team for 2005 as Fisichella moved to Renault. Jacques Villeneuve joined Massa at the team and the pair scored a fourth place apiece as their best results of the year, with Massa slightly ahead on points, 11-9. With his fellow Brazilian Rubens Barrichello leaving Ferrari at the end of the year Massa joined Schumacher in the team’s race line-up. He was widely seen as a ‘number two’ hiring and the first half of 2006 seemed to support the widely held belief that Massa had been promoted beyond his ability.

At Bahrain, Massa spun off while chasing Alonso. He crashed at Melbourne and in qualifying at Monte-Carlo. But in the second half of the year it all came together: Massa won from pole at Istanbul and repeated the feat at home in Brazil, though on both occasions Schumacher’s race had been compromised.

Schumacher left the team for 2007 and was replaced by Raikkonen. At the end of the year Raikkonen was champion and Massa was fourth, but the gap between the two was only 16 points.

Massa showed great speed when leading from the front at Bahrain, Barcelona and Istanbul. But in wheel-to-wheel racing he was clearly still giving away something to his rivals. Lewis Hamilton tricked Massa into out-braking himself off the road at Malaysia, and Fernando Alonso stole victory from him late in the European Grand Prix – Massa risking contact with Alonso and earning a stern rebuke from his rival afterwards.

By the final race Massa was out of the hunt for the championship and surrendered the lead of his home race to Raikkonen so his team mate could be champion.

Against expectations, Massa and Raikkonen’s roles were reversed in 2008. Massa won six times and while he inherited victories at Magny-Cours and Spa he also lost two likely wins for reasons beyond his control at the Hungaroring and Singapore.

Massa out-qualified and out-raced Raikkonen, and at the moment he crossed the finishing line at the final race it looked like he would become champion as well. In a stunning twist, Hamilton passed Timo Glock’s stricken Toyota on the final lap to deny Massa a home championship triumph. Massa’s dignified reaction in defeat won him much admiration.

The next season began poorly for Massa as Ferrari’s new F60 proved unreliable as well as slow to begin with. Once the car improved Massa began regularly scoring top-six finishes – but at Hungary his season took a dire turn.

During qualifying a spring fell off the back of Barrichello’s car. Massa was the next driver on the scene and, with incredible misfortune, took a severe blow to the head when the spring hit his crash helmet.

Massa’s car then slammed into a barrier on the outside of the circuit. He was airlifted to hospital and a tense few days followed as the world waited to hear of his condition. Eventually, good news began to trickle through. He made a full recovery but did not return to competition until the following year.

Massa returned to the cockpit in 2010 alongside new team mate Fernando Alonso. But he endured a difficult season.

All year young Alonso had the edge on him in qualifying and the races. In Germany, exactly one year to the day since his Hungaroring crash, Massa snuck into the lead at the start and kept Alonso behind.

Alonso couldn’t find a way past but a few laps from home the team intervened, ordering Massa to let Alonso past. He complied, sacrificing what would have been his only win of the year.

Two more podium finishes, at Monza and Korea, were small consolation. At Japan he smashed into Vitantonio Liuzzi on the first lap and ended the year with a low-key run to tenth in Abu Dhabi.

Despite another poor season in 2011, Ferrari kept the faith with Massa. He had several collisions with Hamilton, most of which the McLaren driver shouldered the blame for.

While Alonso won once and finished on the podium ten times, Massa never finished higher than fifth.

While Alonso made a serious bid for the title Massa did not cope as well with the shortcomings of Ferrari’s F2012 as well as his team mate. He seemed more lost than ever in the opening part of the season.

There was clearly doubt over his future at the team as the decision on whether to retain him was postponed until late in the season. Eventually Massa began to turn things around. At Japan he ended his podium drought – the longest a Ferrari driver ever endured – partly thanks to a first-lap collision.

But in later races there was evidence that Massa was back to his best In the penultimate two races he even out-paced Alonso in qualifying and the race.

Inevitably this meant he again had to make more sacrifices to help his team mate. In America Ferrari deliberately incurred a gearbox change penalty on Massa’s car to help move Alonso up the grid, and in the season finale he waved Alonso by into second place but was at least able to stand on the podium before his home crowd once more.

Massa carried his improved form into the beginning of 2013, during which he was often on terms with Alonso in qualifying.

But in the races his team mate was on another level, and in the first half of the year a series of crashes and spins further undermined Massa’s efforts.

After the Italian Grand Prix – where he once again had to make way for Alonso – the team finally confirmed Raikkonen would return to take his place. Massa later announced a switch to Williams for 2014.

Massa’s Williams career got off to a faltering start for reasons which were seldom his doing. He was eliminated from his first race for the team at the first corner when he was struck by Kamui Kobayashi’s out-of-control Sauber. More misfortune followed in Monaco, where he was hit by the other Caterham during qualifying, and Silverstone, where he was involved in another first-lap accident.

His new team mate also proved a handful. Both enjoyed the benefits of Williams’ best car for years and the class-leading Mercedes engine, but it was Valtteri Bottas who was racking up the podiums at mid-season. While he split the Mercedes in Germany Massa ended another race on lap one – this time on his roll hoop, having turned in too sharply on Kevin Magnussen.

Matters improved considerably for Massa after the summer break. He reached the podium for the first time at Monza and narrowed the gap to Bottas in qualifying. The season finale was his most successful race of the year as he gained on eventual winner Hamilton in the closing stages and took second place.

Third on the grid for the opening race of the season in Australia signalled a continuation of Massa’s upswing in form as the new season began, though this proved his highest starting position in another season largely dominated by Mercedes.

He repeated that qualifying performance at Silverstone then produced a scintillating start to lead a Williams one-two in the opening stages. The irresistible pace of the Mercedes eventually told, however, and when a rain shower late in the race exposed the weakness of the Williams chassis he slipped to fourth behind Sebastian Vettel – just as he had in Australia.

This mid-season high was also a turning point. Until then Massa had taken points from every race with the exception of Monaco, where his car’s poor low-speed traction made for a difficult weekend.

But in the second half of the year niggling problems cost him four points-scoring opportunities: collisions in Singapore and Japan, car problems in the USA and a contentious disqualification at his home grand prix. The result was Bottas demoted him to sixth in the championship at the end of the season.

Halfway through a difficult third season at Williams, Massa announced at Monza he would retire from F1 at the end of the year. But within a few months he had reversed the decision and returned for another season at Williams.

The trigger was Nico Rosberg’s shock retirement from Mercedes after winning the world championship. When Mercedes came kncoking at Williams for Valtteri Bottas, Massa’s returned was assured.

Massa had already been through an emotional ‘retirement’ at his home race in 2016, the penultimate round of the season. After crashing out in soaking conditions, Massa was applauded by the pit lane as he walked back to his garage.